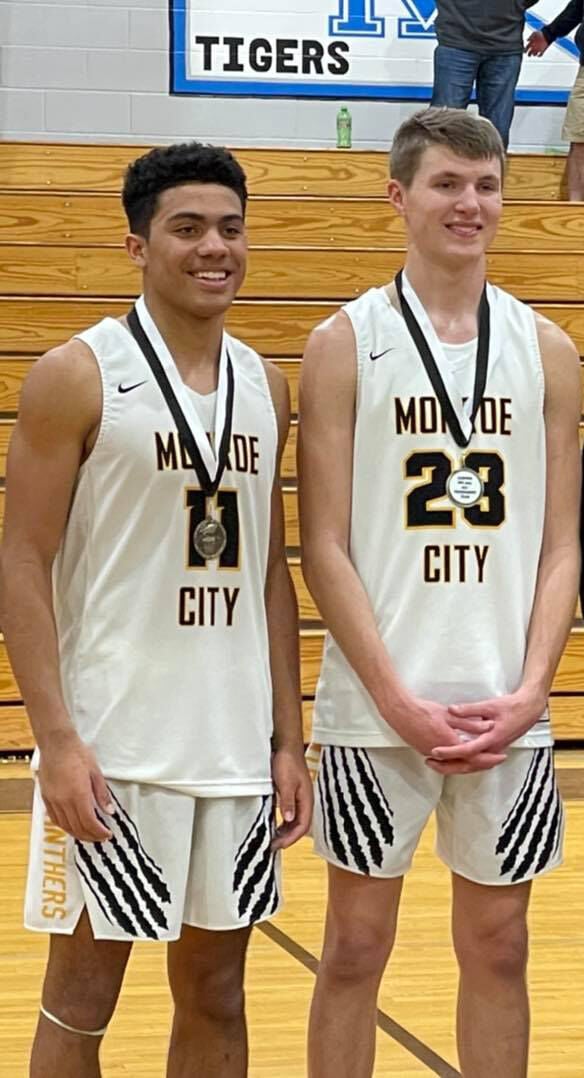 Clopton Tournament All Team was awarded to Joshua Talton and Logan Buhlig.

Clopton Tournament All Team was awarded to Riley Quinn and Hallie Dyer.

The Monroe City Panthers and Lady Panthers spent the past week traveling to Clarksville to compete in the Twenty-Fifth Annual Clopton Basketball Tournament. The two teams did not disappoint bringing home both Championship trophies.

On January 8, the Lady Panthers met the Clopton Lady Hawks on the court. The Lady Panthers won 71-33. Head Coach Cody Leonard stated, “I thought we played really good team basketball all week.  It's nice to go down there and see teams that we don’t normally play against.  I thought we were locked in defensively all week.  Any time you hold teams to 13, 27 and 33 points, you are giving yourself a chance to be successful.  Offensively we continue to share the ball and find the open person.” Although the Lady Panthers continue to lead an undefeated path, Coach Leonard reminds his players there is always room for growth, adding, “I think the team continues to strive to get better. We talked about it over break, we are far from a finished product. We have a lot of progress to make until the end of the year.”

Leading her team in points during the Championship game was Hallie Dyer with 20, followed by Haley Hagan with 18, Clara Minor and Mackenzie Moss each had 5 points and Bailee Hays had 4.

The Panthers took part in the Championship game on January 9 against Winfield, obtaining victory with a winning score of 59-47.  Monroe City took the lead over the Warriors in the first half, ending with a positive outlook at halftime leading 33-23. In the third quarter, Coach Edris led his team to the basket, taking a huge lead of 49-28. This helped the Panthers see victory was near as they continued to display their skill in the second half to bring home the Championship Title.

Head Coach Brock Edris explained the tournament games, sharing, “Playing in the Clopton tournament is a great opportunity for our team to play some different competition and prepare for the conference basketball season. We opened up our first game as the number one seed verses the number eight seeded Silex. Our team shot the ball well and did a nice job defensively making it difficult for Silex to score.”

In the semi-finals the Panthers had a rematch from the Monroe City tournament against the number four seeded team, Louisiana. The Panthers were able to advance against the Bulldogs, winning 67-34.

In the Championship game, Coach Edris explained, “I knew this would be a good test for our team with Winfield receiving votes in Class 4 and had beaten some other big schools prior to our game. We opened the game cold from the outside missing our first 5 of 6 shots and finding ourselves down 13-4 early in the first quarter.” The Panthers picked up the pace, as Coach Edris added, “Our team did a great job of changing the momentum and before you knew it, we ended the first quarter down 16-18. In the second quarter, we continued with the momentum and gained a 10-point advantage going into halftime after holding Winfield to just 5 points in the second quarter. Winfield has a good basketball team and made our team better. We will continue to have some tough games coming up and will look for ways to compete better as individuals and as a team.”

Named to the All-Tournament Team were

MCHS will begin more tournament action during the week of January 18-23, as they compete in the Palmyra Tournament.

This week the varsity teams travel to Clark County on January 15.