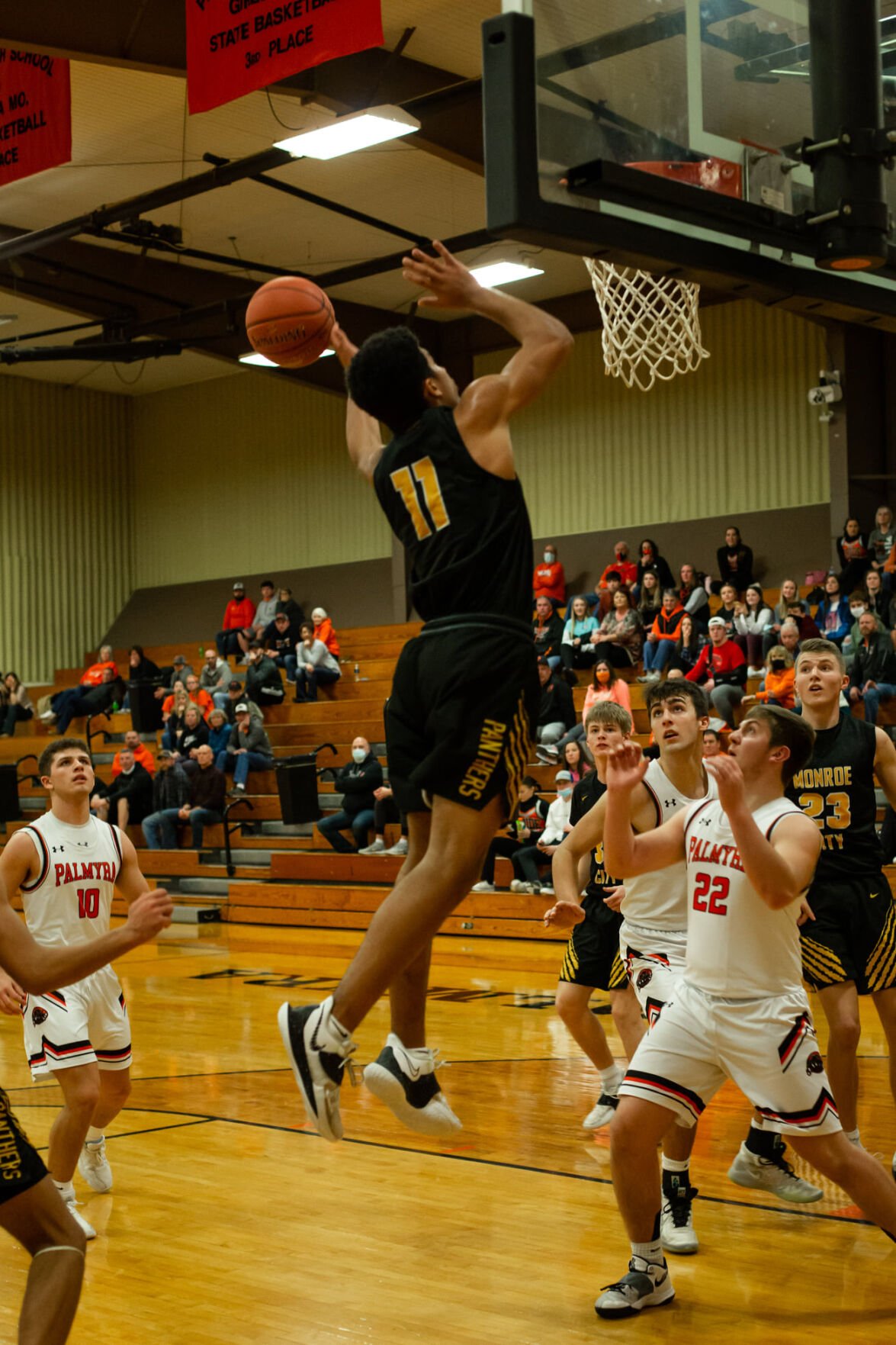 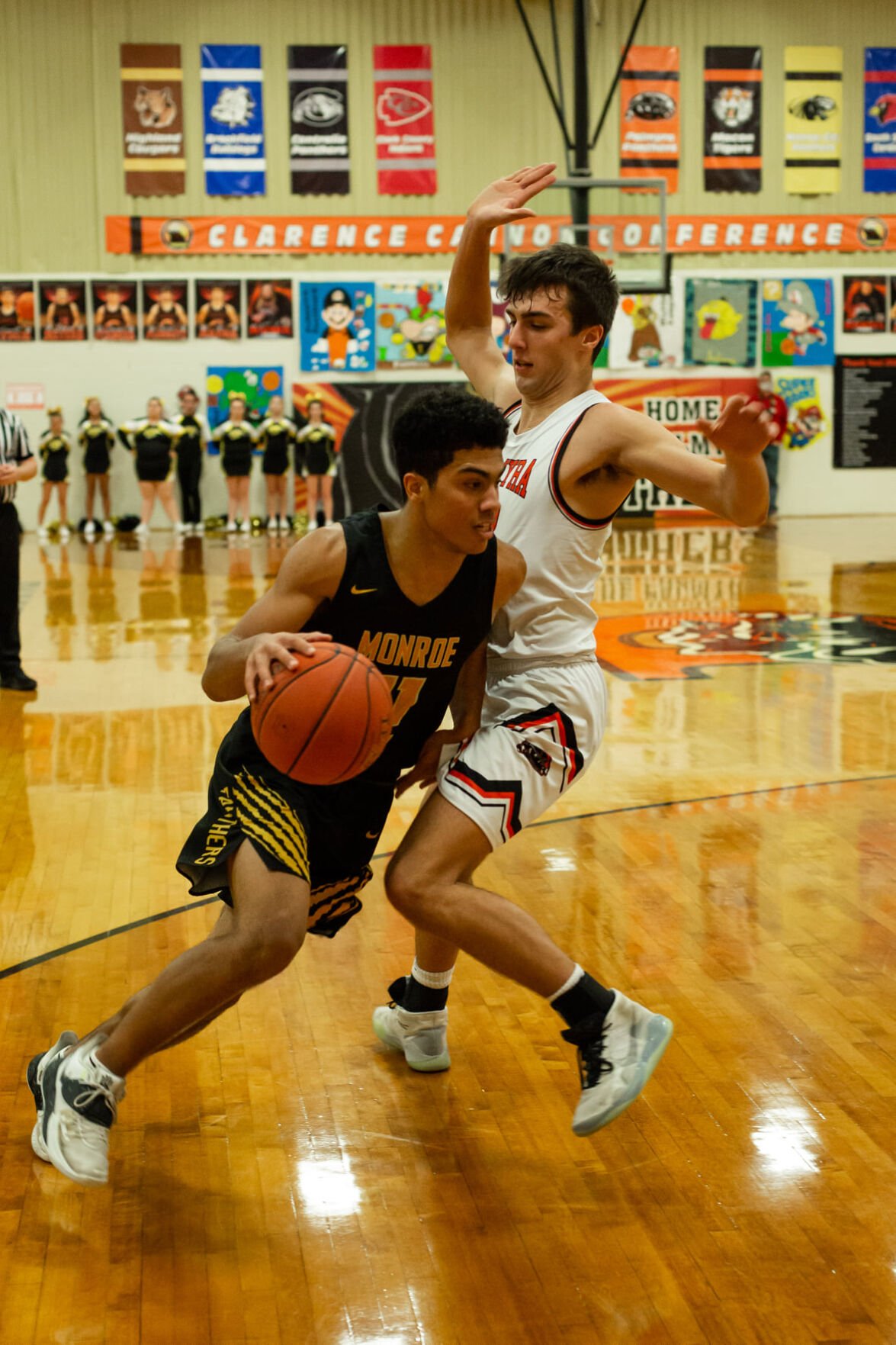 The Monroe City Panthers earned the title of being the Clarence Cannon Conference Champions against Macon on February 19 and ended the last Conference game undefeated on February 20 against Highland. The Panthers ended their regular season with 22 wins and only 2 losses against teams playing in 4A and 6A divisions.

Head Coach Brock Edris stated, “The win clinched the Clarence Cannon Conference title for the third year in a row. It’s the first time that I can remember one of our conference teams clinching the title with an extra game still yet to play. I’m proud of their continued effort and support of one another. We’re excited for district play approaching and plan on taking it one game at a time.”

The Panthers had a busy schedule this past week, attempting to make-up cancelled games due to weather conditions previously. The Panthers headed west to meet the Macon Tigers on the court and found themselves in overtime, before earning the CCC title.

Coach Edris explained his team’s performance, stating, “We had just played at Palmyra in a physical game on Thursday. Traveling to Macon on a back to back with no preparation was not going to be an easy task. I knew Macon’s athleticism was a good match up compared to most teams that we had seen in our conference.”

“Macon did a great job of attacking the rim in the first half and getting Joshua Talton and Jaedyn Robertson in foul trouble. We weathered the storm a bit, played a little zone defense to try to eliminate any more foul trouble. We came out in the third quarter aggressively getting the ball to the rim either by post up opportunities or by attacking off the dribble. We managed to get many of their players in foul trouble. This would help out later in the game.”

Near the end of the fourth quarter Monroe City was up by one point. The Panthers committed a foul that sent #23 Nobles to the free throw line with the double bonus. Monroe City called a timeout to ice the shooter. Nobles managed to barely strike iron as he missed the first free throw but made the second free throw to tie the game. Coach Edris added, “With nearly 40 seconds left in the game we held the ball for the last shot. Called a timeout with 15-20 seconds left in the game. While trying to execute our sideline play the Macon Tigers aggressively trapped the first pass. We escaped the trap but couldn’t find an advantage to score. Before time expired I used one of our two timeouts we had left with 1.3 seconds left in the game. With another sideline out of bounds opportunity, Joshua Talton was able to catch the basketball at nearly 17 feet away from the basket in front of our bench.  He turned, took one dribble and his shot was just off the mark to win the game in regulation.”

In overtime, the Panthers experience took over as they were patient but aggressive around the rim knowing they could not afford to foul out of the game. The Panthers scored early against the Tigers and eventually forced Macon to play more physical which fouled some of their players out of the game. Monroe City did a better job in the overtime frame of making free throws to seal the win.