Free access for current print subscribers
Get Started
You are the owner of this article.
Edit Article Add New Article
You have permission to edit this article.
Edit
Home
News
Sports
Living
Announcements
A & E
Features
Obituaries
Classifieds
Coronavirus News
Missouri Marketplace
The Job Network
1 of 8 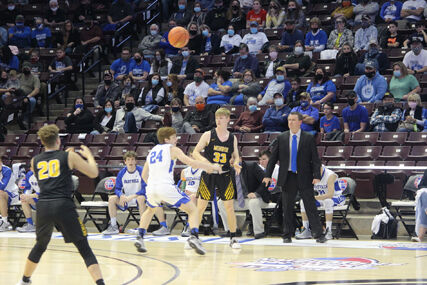 Cade Chapman passes the ball to his teammate Jaedyn Robertson. 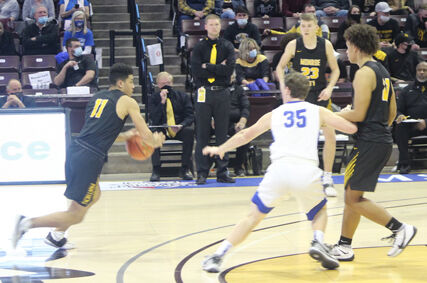 Joshua Talton dribbles in towards the basket to take a shot. 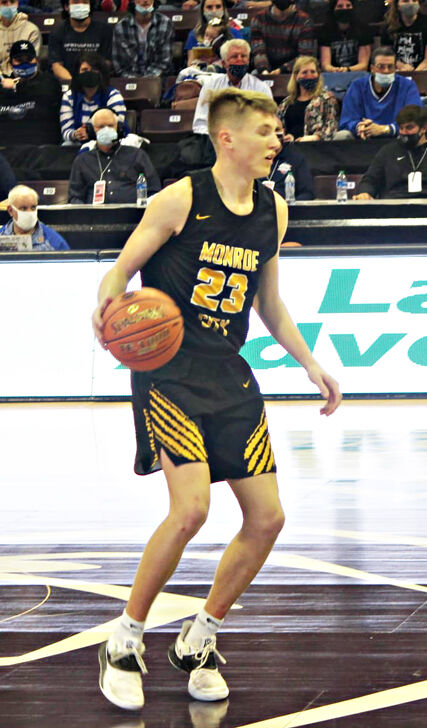 Lone Senior Logan Buhlig plays outside the perimeter in the State Championship game, leading his team in points scoring 11. 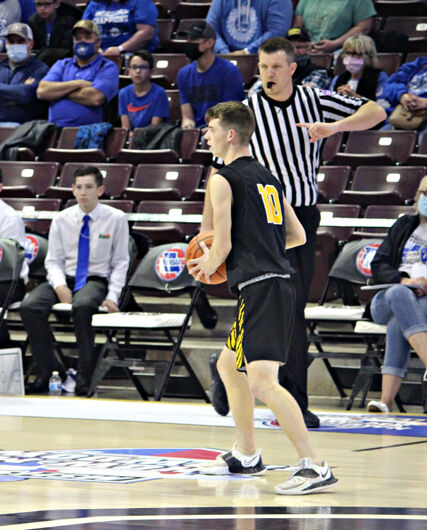 Kyle Hays brings the basketball down the court. 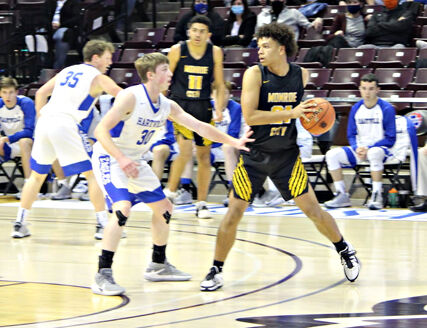 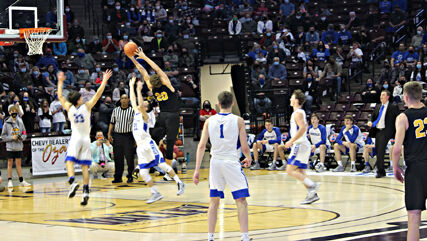 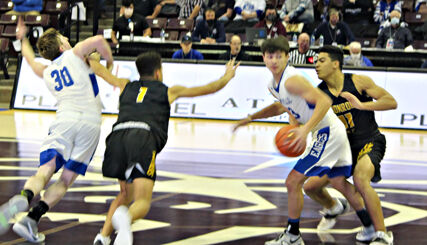 The Talton Twins, Josiah and Joshua play defense against Hartville in the Championship game on March 13 in Springfield.

Monroe City was on the prowl for a State Title this past weekend, as they competed in the 2021 MSHSAA Missouri Boys Basketball Class 3 State Championship. The Panthers celebrated their season bringing home a Class 3 Second Place Title to add to their season of accomplishments. Head Coach Brock Edris explained the return to the Final Four, stating, "This is the first team in school history to make it to the Final Four in back to back seasons. It's difficult to make it once, let alone twice in a row. I have a feeling our team will be on a mission to be their best yet in 2022. I'm thankful for the opportunity to coach these young men and watch these kids develop into young adults that continue to positively impact our future Panthers."

The Panthers ended with a 27-3 overall record on March 13, with a long list of accomplishments which includes being the Monroe City Tournament Champions, Clopton Tournament Champions, Tony Lenzini Tournament Champions, Clarence Cannon Conference Champions for the third year in a row, Class 3 District Champions for the fifth year in a row, and a Second Place State finish, which had not been accomplished since 1982. Edris knows his team has plenty of reasons to hold their heads high, stating, "Our players were obviously disappointed that we weren't bringing back the Title to Monroe City. You could see it in their eyes as they watched the trophy presentation. However, they have so much to be proud of."

The school spirit could be felt throughout the gymnasium and into the atmosphere of those watching online, as the hometown team gave their best efforts to defeat an extremely talented Hartville team with a 30-0 season record.

The Panthers opened up the first quarter with both Monroe City and Hartville finding it difficult to make baskets. The low scoring game proved the two teams a defensive match-up early. A few minutes into the first quarter, Kyle Hays posted up to swish a three pointer to get the rhythm moving. The second half mirrored much like the first, with each team playing full-court press, while offensively trying to make each shot count.

The game continued bucket for bucket as Monroe City trailed Hartville by 2-5 points throughout the entire game, and coming up short with a defeated score of 43-35. The fourth quarter sent both teams to the free throw line as each grasped for the State Champion Title. As the game ended, Monroe City fans cheered on the Panthers for such a great accomplishment, celebrating their Panthers as the Second Place Class 3 State Champions.

Coach Edris stated, "Going down to Springfield this year our team had one thing in mind, and that was to win a State Championship even if it meant playing against defending State Champions (Hartville) who also held a 41 game winning streak." Edris described his team in being confident in their abilities and knew that they matched up very well with Hartville. Both teams were almost a mirror image of each other based on the offense that we ran and how much pride each team takes on the defensive end of the floor. Edris added, "We were excited for the opportunity. It was a low scoring game like we envisioned and we had the game within 1 possession with 2 minutes left in the game. Hartville did a great job of securing the lead and made us pay during their stall game. They made a couple lay ups and free throws late to finally end it 43-35. Hartville was experienced with 7-8 seniors, very well coached, and played a terrific schedule beating teams that are in the class 5 and 6 Final Four."

On Sunday, March 14, the Panther players, along with their fans, family members and MCR-1 staff gathered in the high school gymnasium to have a Welcome Home assembly celebrating the team’s accomplishments.

Earlier in the week, Monroe City Panther fans filled Main Street on Thursday March 11, cheering on their favorite basketball team. Supporters were seen waving the ole black and gold flags, holding up homemade signs with encouragement and big smiles as the team was escorted out of town by the Monroe City Police Department on a charter bus.

Prior to climbing aboard, the high school gymnasium was filled with students and school faculty for a school wide pep rally, including Kindergarten through Twelfth. The players were introduced, as Head Coach Brock Edris addressed those in attendance. The gym was filled with eager looks of anticipation and clapping as they cheered for the Panthers. The cheerleaders led the crowd, pumping up the excitement for Monroe City to be State bound on the prowl for a state title.

After arriving in Springfield, the team checked into their Hotel and began preparing for the 2021 Final Four semifinal.

On March 12 at 4 p.m. the Panthers met Summit Christian on the court. The first two quarters seemed to fly by as Monroe City trailed their opponent. With heart and devotion, the Panthers proved their ability of team work, working hard to make baskets as a very tall Summit Christian team towered over them. The second half began and Joshua Talton soon entered foul trouble. Buhlig, Robertson and the Talton twins seemed to be struggling to find their three-point groove as their opponents seemed to swish the net with ease.

Then came the fourth quarter, the Panthers pressed Summit Christian into uncomfortable territory and managed to tie the game, sending the game into overtime.

Coach Edris stated, "Our team did a tremendous job keeping their big man in check only allowing 6 total points for the game and their point guard finished with 15 points. We struggled scoring and unfortunately Joshua Talton was in foul trouble early and often throughout the game. But we had other players step up and made enough plays to force overtime."

The Panthers made each second count, finally gaining the lead for the first time all evening and swished free throw points to punch their ticket to the Championship game.

As the Panthers won, 42-38, the fans celebrated with cheers, hugs and tears. Those back home celebrated in their own homes watching live stream and sending out congratulations on social media knowing the Panthers would be bringing home a title to title town.

Monroe City will return next season losing only one senior player, Logan Buhlig. Buhlig led his team in the championship game with points, scoring 11.