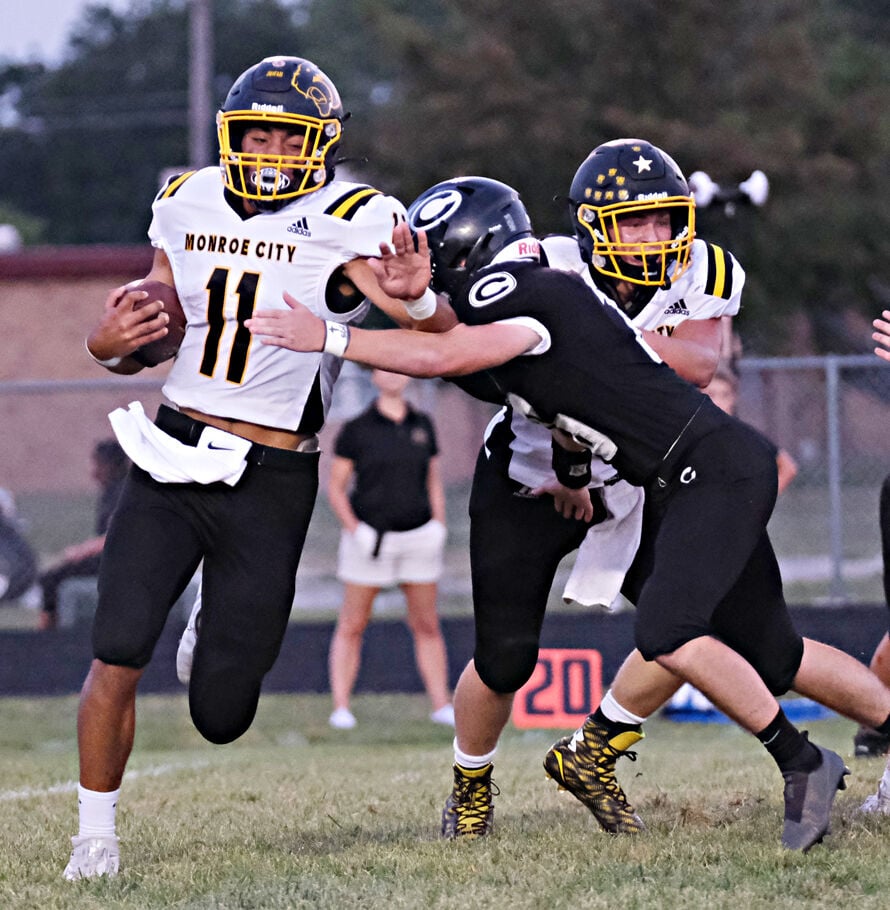 Joshua Talton makes his way to the end zone on Friday night against Centralia. 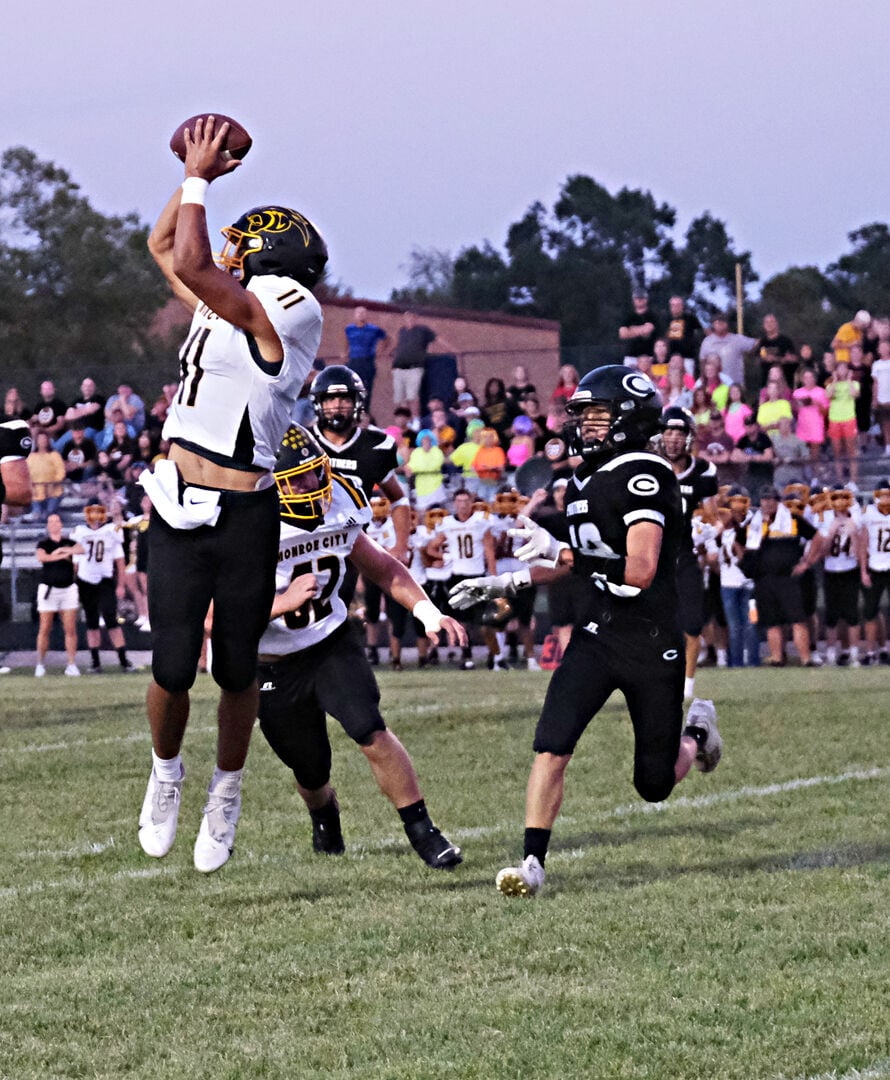 Joshua Talton catches a pass from quarterback Kyle Hays, completing enough yards for a first down. 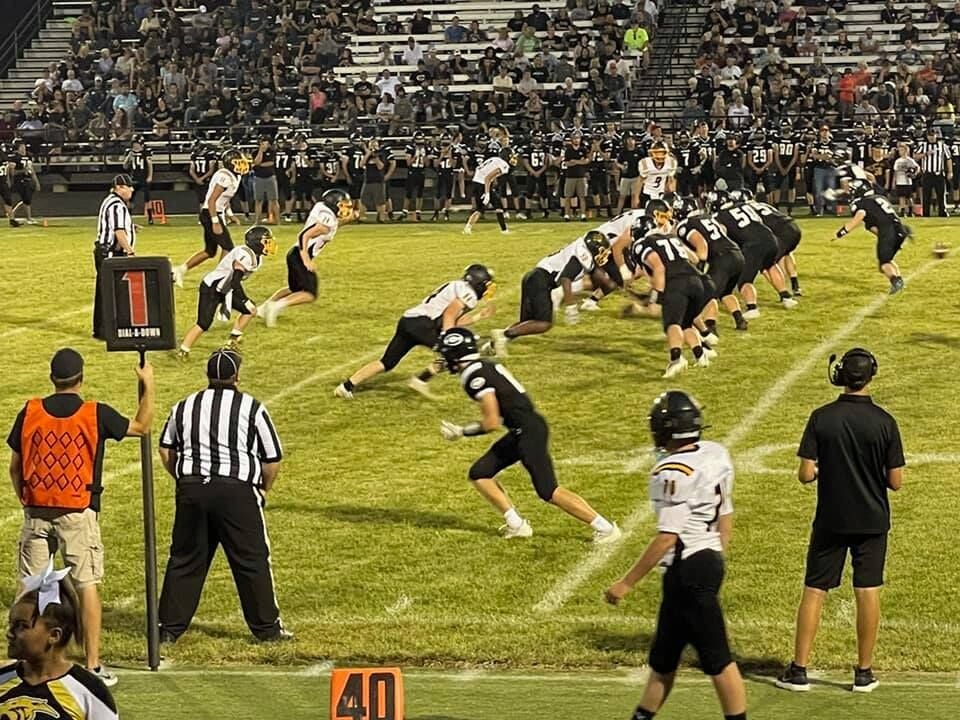 Monroe City offense prepares to run a play against Centralia, winning the game 44-6.

Monroe City traveled to Centralia on September 17. As the Panthers met the opposing team on the field, it was evident of Monroe City’s offensive and defensive advantage, winning 44-6 with a season record 4-0. Head Coach Kirby stated, “Our speed and athleticism has made an impact in all games.  Our kids practice fast and that translates very well to Friday nights.”

During the first quarter Monroe City took the lead 8-0. Dawson Karr opened the game with  a huge play to drive up the team’s momentum by intercepting the football, causing the fans to stand to their feet cheering. The Panthers then advanced the ball back down the field scoring the first touchdown Ceaton Pennewell and Landon Utterback getting the 2-point conversion.

At half-time, Monroe City continued to lead 16-0, pushing Centralia back down the field and keeping them from reaching their endzone. Duing the second quarter, the Panthers ate up over five minutes on the clock to drive the ball back down the field to gain their second touchdown with a quarterback keeper by Kyle Hays, followed by Utterback finding the hole for another 2-point conversion. Prior to the touchdown, Hays completed passes to both Talton and Pennewell. Monroe City defense showed their strength to do the job stopping Centralia as they came up short and had to turn over the ball on downs.

In the third quarter the Panthers continued their lead over Centralia 30-0. Panthers opened up the quarter defensively with Deion White showing up for tackles and Holland knocking down a pass. The game seemed to be on repeat as Centralia turned over on downs and Monroe City continued to find the end zone. Talton added two more touchdowns, along with Hays finding the right play for another quarterback keeper touchdown.

The game ended with Centralia finding their end zone in the fourth quarter with one touchdown. Monroe City added two more touchdowns with Hays completing a 31 yard touchdown pass to Cade Chapman, followed by Chapman intercepting the ball. Pennewell adds the second touchdown in the quarter, bringing the score to 44-6.

Title Town will host the Football Homecoming next week against Palmyra at Lankford Field. Coach Kirby stated of the upcoming game, commenting, “I expect it to be a very physical game.  We will need to be prepared to play our best football.  Our kids are more than capable of playing physical and it will show this Friday night. We look forward to a packed house and a playoff game atmosphere.”

Kick-off is scheduled for 7 p.m.