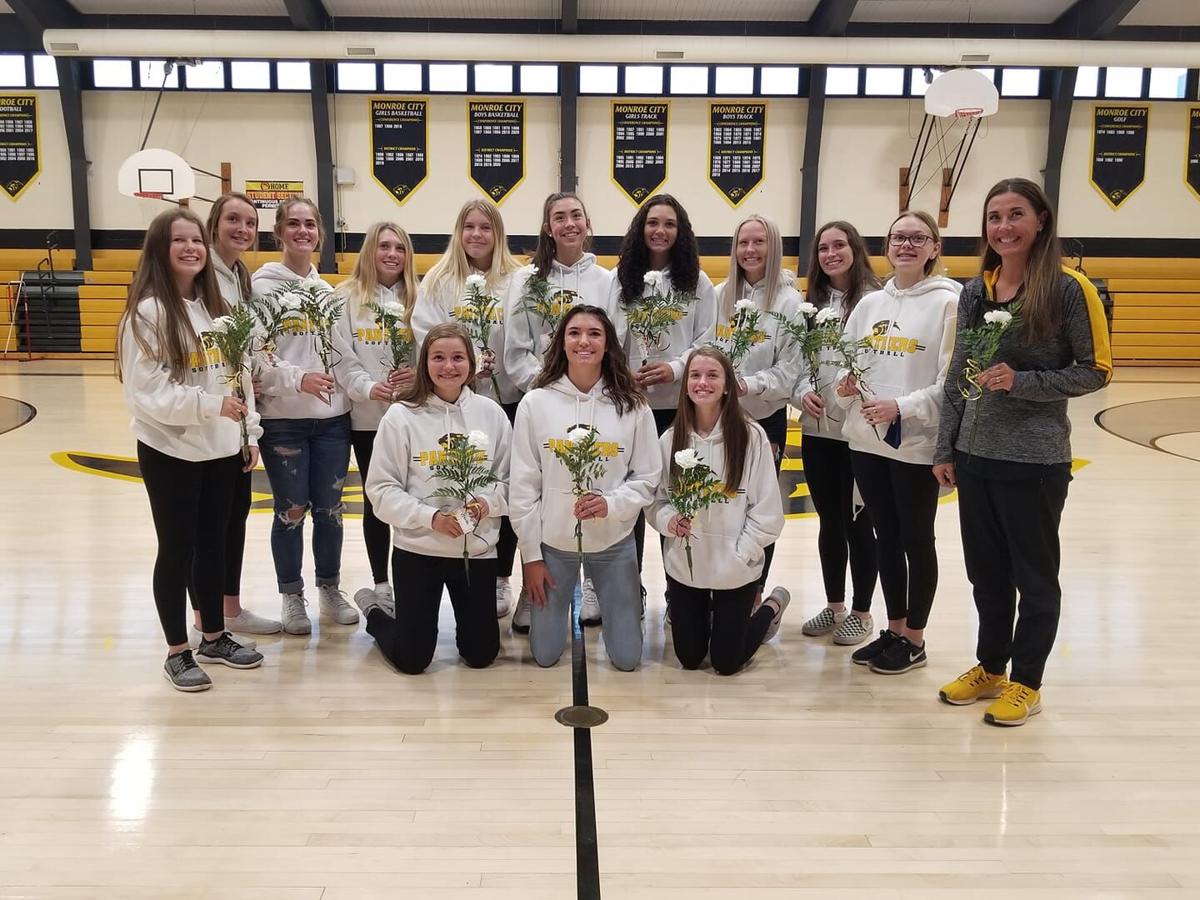 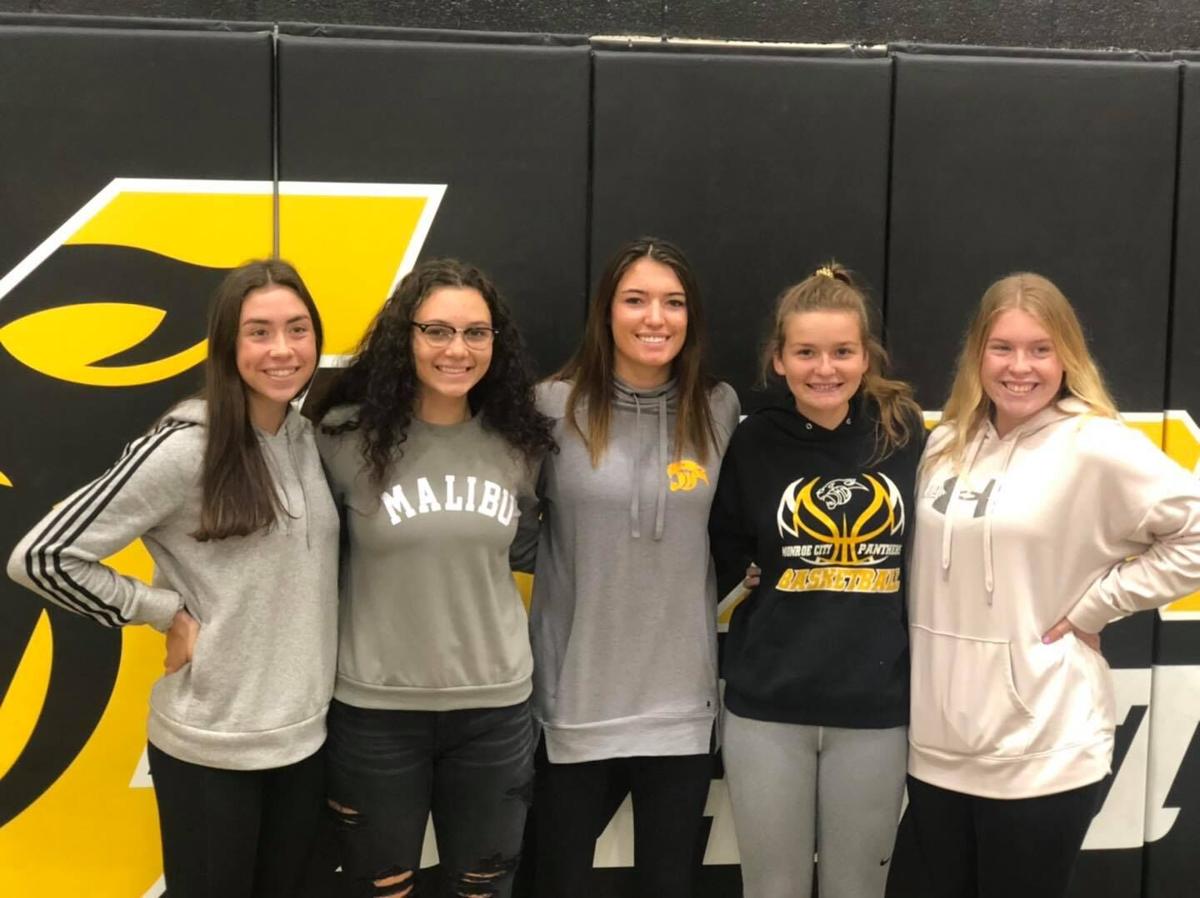 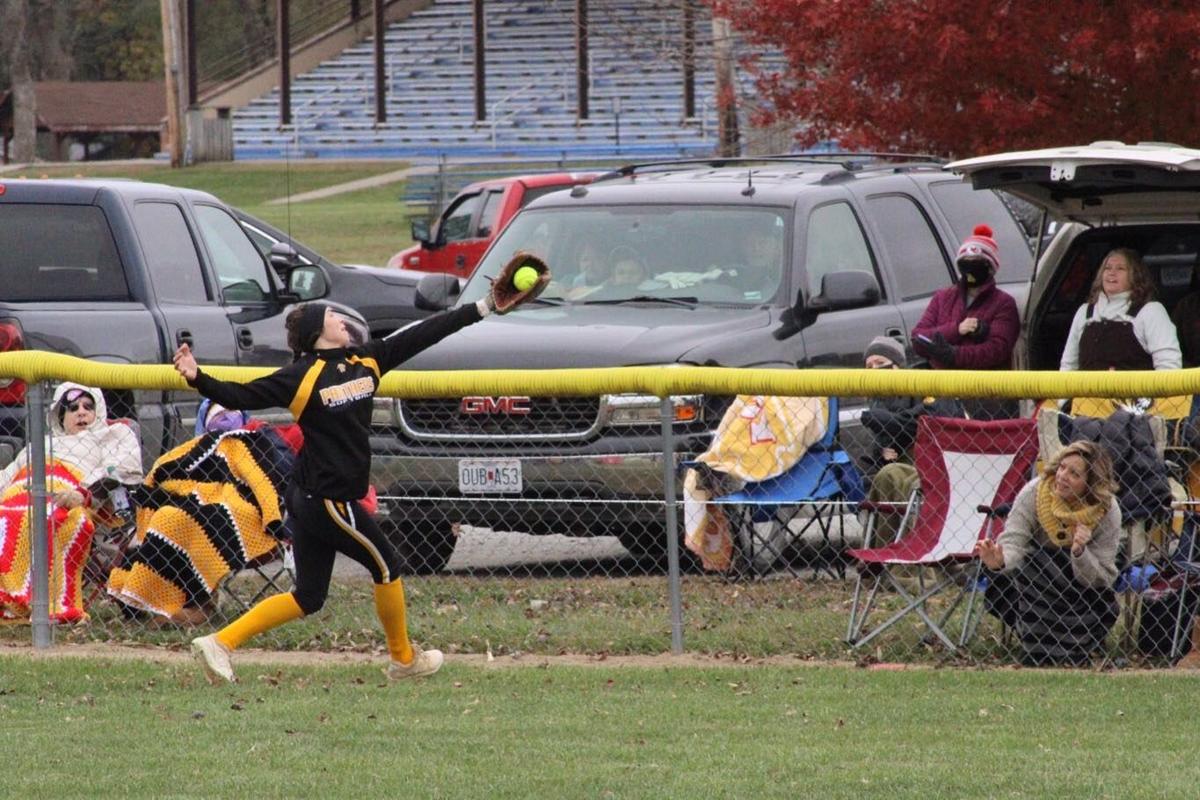 Outfielder Carly Youngblood stretches for the catch in the Class 2 State Final Four game on Saturday, Oct. 24 against Penney.

On Saturday morning, October 24, the Lady Panthers boarded the bus to head west for the Class 2 Final Four State Championship game. The fans lined the streets, cheering on the team with shouts of excitement, wearing black and gold and holding posters in support. Despite their efforts, the Lady Panthers would fall 10-3, but made Monroe City history being the first softball team to bring home a Third Place State Title.

Head Coach Melissa Chinn stated of the season, “This season was so different. We started working early in the summer and then played every game as if it was our last because plenty of teams lost games to COVID. We knew we wanted to leave it all on the field and they did that. I couldn’t be more proud to be their coach.”

As the Lady Panthers traveled down the highway to meet their opponent, the Penney Lady Hornets, the atmosphere of the players created an excitement, which won’t be forgotten any time soon. Coach Chinn shared, “The bus ride was exciting, especially the amazing send off the community had for this team. You could see just how excited the girls were to go. It was quite a ride, being two hours, but the girls listened to their music and chatted the whole way. It really seemed positive.”

Monroe City arrived in Hamilton ready to play, along with all their fans to cheer them on, as they embraced the opportunity ahead of them.

In the first two innings, Penney was able to gain two runs, while holding Monroe City without scoring. The Lady Hornets would gain another run in the top of the third, as the Lady Panthers rallied back with two runs. Despite Monroe City’s efforts, Penney would connect at bat scoring runs in each inning to finish out the game. Senior Riley Quinn pitched all seven innings with 27 strikes and 10 strike-outs and had 2 RBI’s.

Coach Chinn stated, “I’m excited that this group left their mark on Monroe City Softball. We invest so much time into one season, so this outcome is outstanding considering we were worried about even having a season,” Chinn added on the ending of the season stating, “The game wasn’t how we hoped to end our season, but I couldn’t have asked for a better group. They worked hard and put as much heart as they could into everything they did.”

Earlier in the week, the Lady Panthers advanced to State Final Four; swinging past Marceline.

Another schedule switch brings in Vandy; Commodores could add a bit of history

In true sportsmanship fashion, the Lady Panthers sealed the deal for the ticket to advance, after defeating Marceline Wednesday evening.

The Monroe City team left town on October 21, with fans lining the roadway to cheer them on to victory with homemade signs and shouts of excitement.

Despite the wet weather and a game delay, Monroe City took the field ready to buckle down both offensively and defensively. Head Coach Melissa Chinn stated, “I am so proud of how well this team is playing now. They are definitely peaking at the right time. Our bats are on fire and they are hitting solid.”

The first inning ended with Marceline ahead by one run, with a 4-3 score. Moving into the second inning both teams would prove to be offensively and defensively strong, keeping their opponents from scoring runs. During the top of the third and fourth innings, the Lady Panthers found their swing and connected with hits, advancing with 4 runs and taking the lead.

The fifth inning ended with Monroe City only ahead by 3 runs, but during the sixth inning the Lady Panthers kept their bats swinging, showing their fans the Final Four was in sight, ending the game with a victory score of 13-7.

Monroe City had a total of 16 hits in the game, compared to Marceline’s 9 hits. The Lady Panthers gave up 4 errors, and Marceline had 7 errors. Emily Freidank, Mackenzie Moss and Bailee Hays each had 2 RBI’s, Kailynn Fuemmeler added 4 hits, and Moss and Youngblood each had 3 hits. Riley Quinn pitched all 7 innings, totaling 18 fast pitch strikes, with 3 strikeouts.

Coach Chinn had added on the final four game, “I hope we can continue this on into the next game. We just need to keep playing our game and doing our thing.”

On Sunday, October 25, the Monroe City Lady Panthers were honored with a Welcome Home Ceremony to celebrate being named Class 2 Region 2 Third Place State Champions. The public was invited to come and welcome the players and cheer them on for all their hard work and accomplishments.