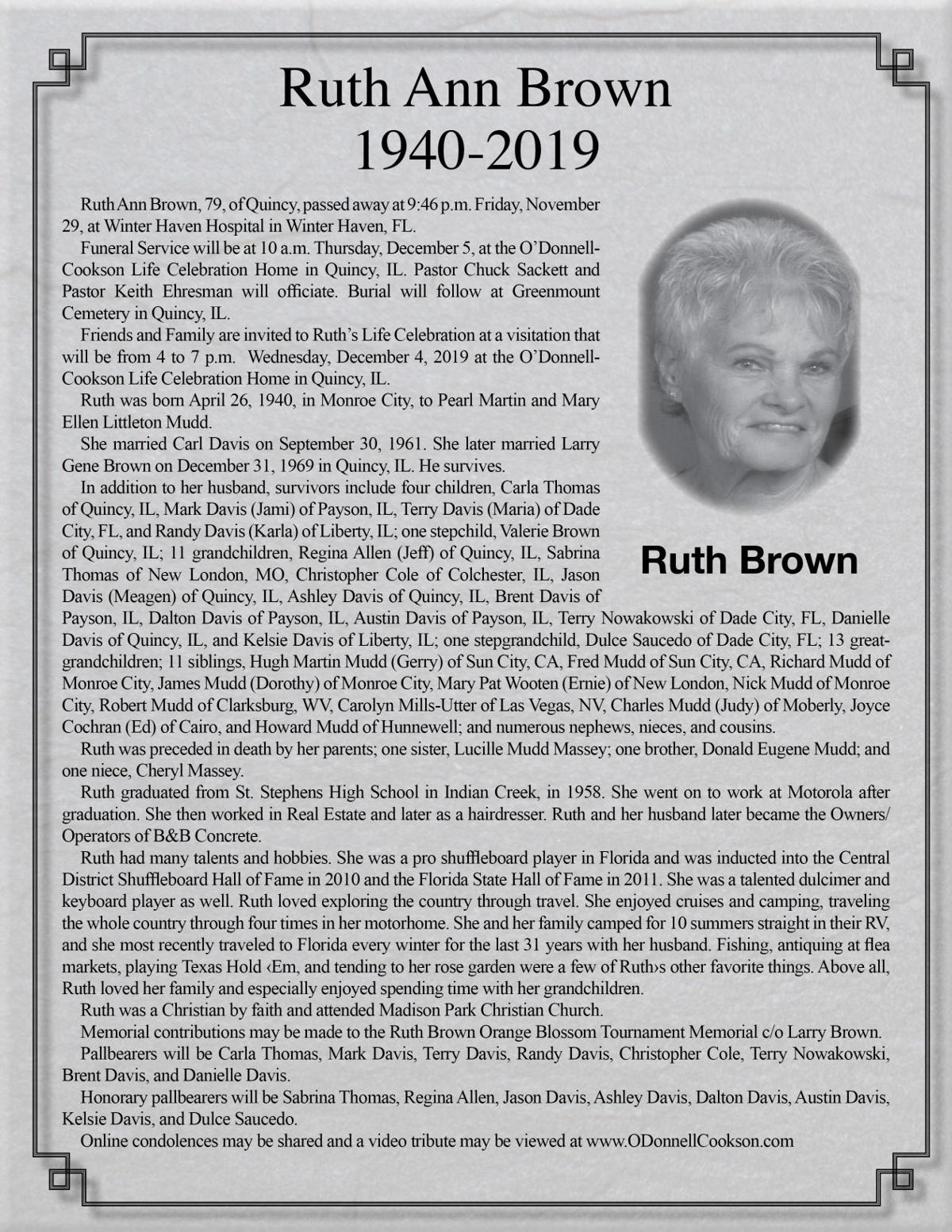 Funeral Service will be at 10 a.m. Thursday, December 5, at the O’Donnell-Cookson Life Celebration Home in Quincy, IL. Pastor Chuck Sackett and Pastor Keith Ehresman will officiate. Burial will follow at Greenmount Cemetery in Quincy, IL.

Friends and Family are invited to Ruth’s Life Celebration at a visitation that will be from 4 to 7 p.m.  Wednesday, December 4, 2019 at the O’Donnell-Cookson Life Celebration Home in Quincy, IL.

Ruth was preceded in death by her parents; one sister, Lucille Mudd Massey; one brother, Donald Eugene Mudd; and one niece, Cheryl Massey.

Ruth graduated from St. Stephens High School in Indian Creek, in 1958. She went on to work at Motorola after graduation. She then worked in Real Estate and later as a hairdresser. Ruth and her husband later became the Owners/Operators of B&B Concrete.

Ruth had many talents and hobbies. She was a pro shuffleboard player in Florida and was inducted into the Central District Shuffleboard Hall of Fame in 2010 and the Florida State Hall of Fame in 2011. She was a talented dulcimer and keyboard player as well. Ruth loved exploring the country through travel. She enjoyed cruises and camping, traveling the whole country through four times in her motorhome. She and her family camped for 10 summers straight in their RV, and she most recently traveled to Florida every winter for the last 31 years with her husband. Fishing, antiquing at flea markets, playing Texas Hold-Em, and tending to her rose garden were a few of Ruth›s other favorite things. Above all, Ruth loved her family and especially enjoyed spending time with her grandchildren.

Ruth was a Christian by faith and attended Madison Park Christian Church.

Memorial contributions may be made to the Ruth Brown Orange Blossom Tournament Memorial c/o Larry Brown.

Online condolences may be shared and a video tribute may be viewed at www.ODonnellCookson.com