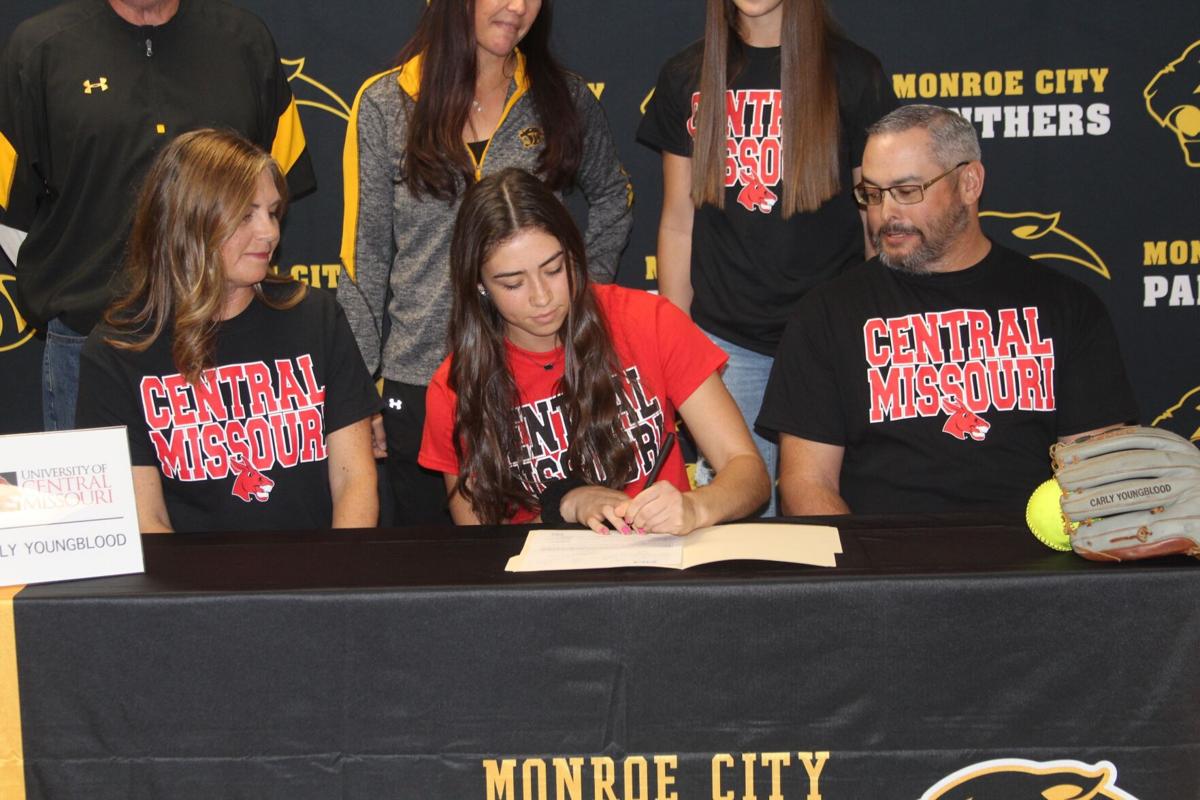 Parents, Dawn and Steve Youngblood, proudly watch their daughter Carly sign her letter of intent to play for University of Central Missouri. 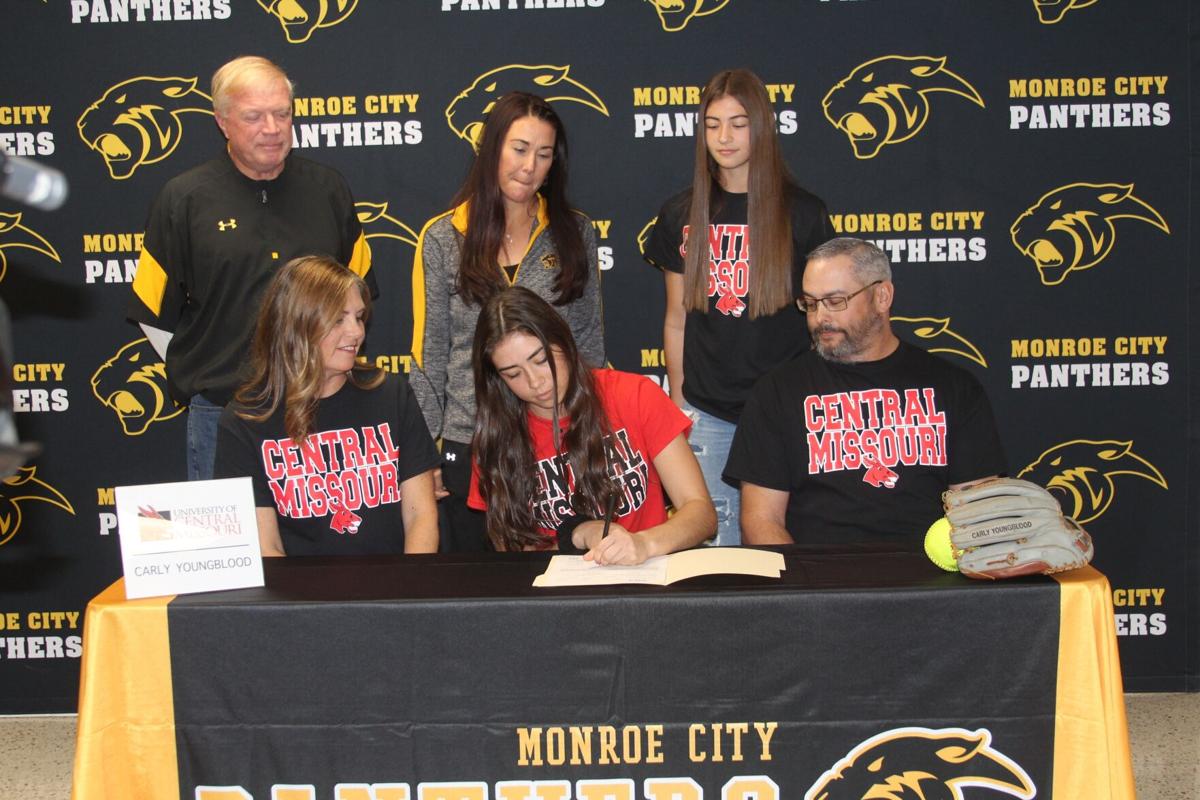 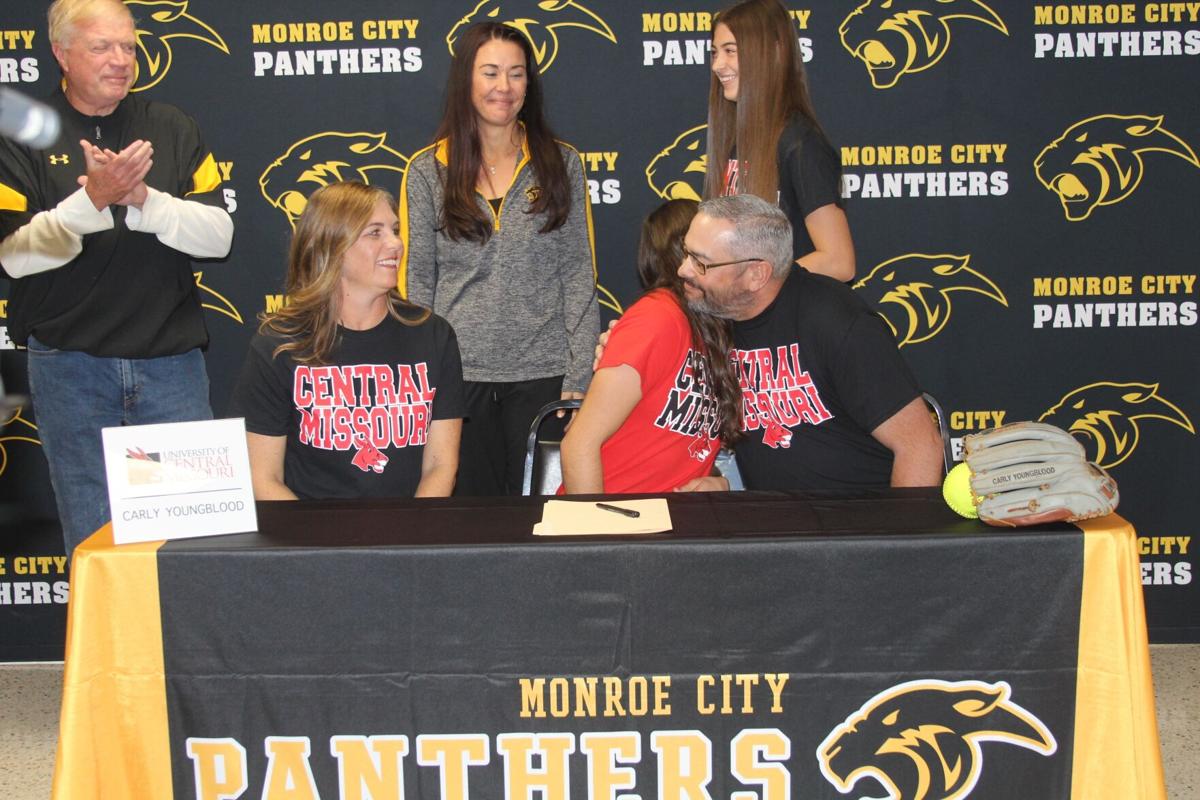 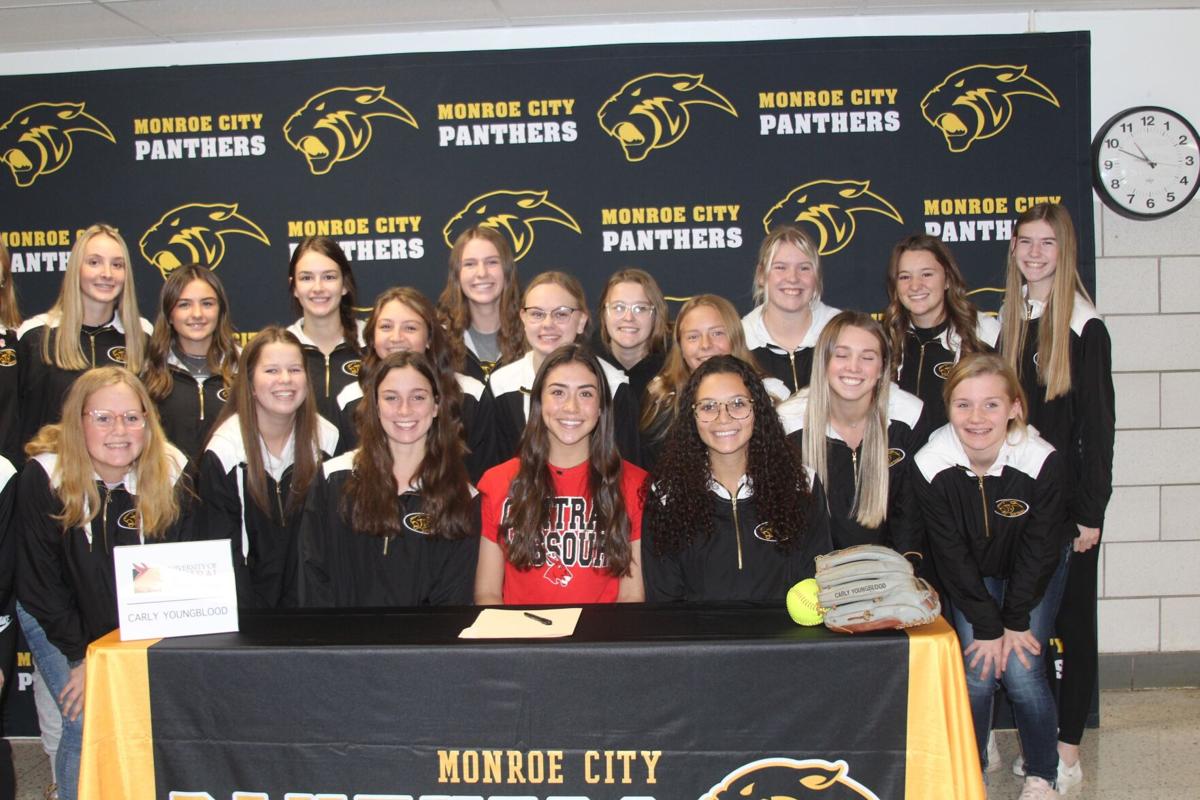 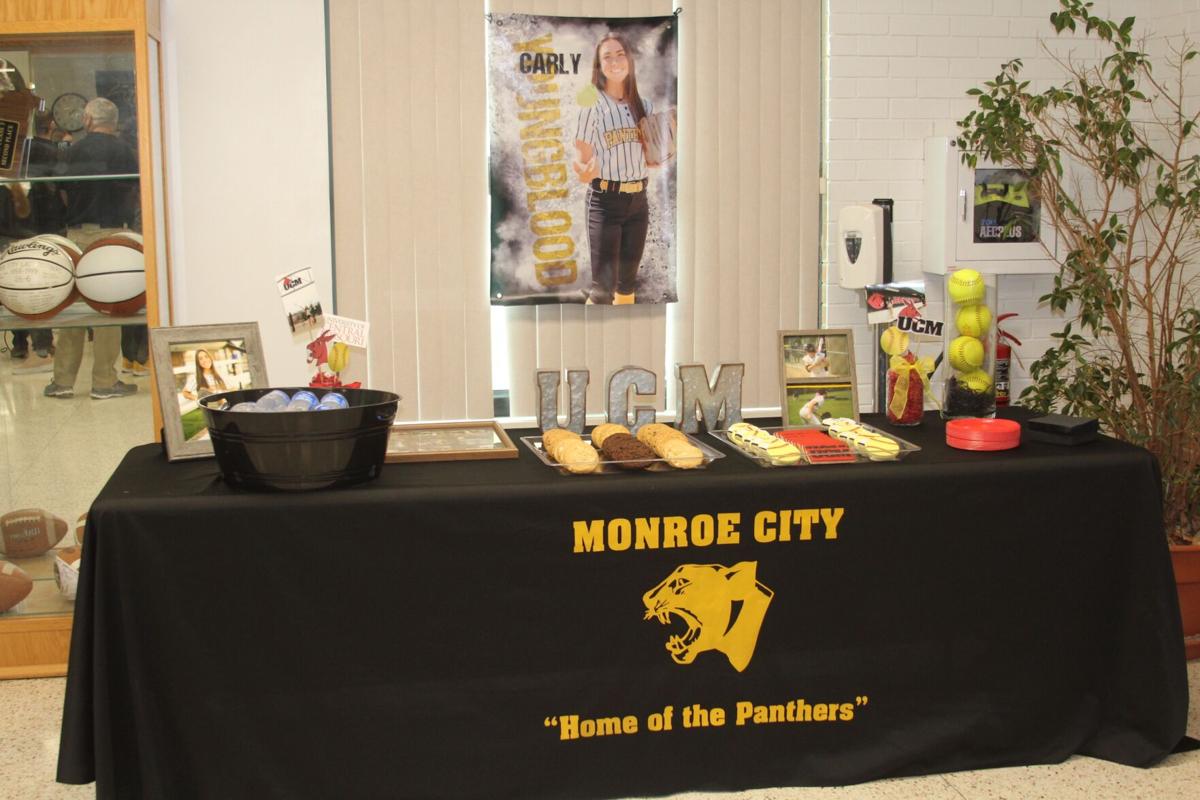 The Monroe City R-1 high school (MCHS) lobby welcomed guests, staff members and coaches on November 10, as Carly Youngblood signed a letter of intent to carry on her softball career at the collegiate level with plans to attend University of Central Missouri (UCM). Surrounded by her family, friends and teammates, Carly was all smiles as she committed to the next journey in her life to become part of the UCM Jennies Softball family.

Carly is the daughter of Steve and Dawn Youngblood, and sister of Lauren and Audri Youngblood. She explained why she chose UCM, stating, “I liked the campus and coach at UCM. They have a great sports and academic program. It is also located in a small community and I like the idea of that.” Although she does understand playing at the college level with take hard work and dedication, she added, “I will be starting over as a freshman and will have to earn my spot, but am looking forward to getting to be with the team and college life. I believe making the transition will be easier because I will already know my teammates.”

After Carly was done signing, everyone was invited for refreshments provided by the Youngblood family. Family, students and staff members were seen enjoying an assortment beautifully decorated sugar cookies to match the occasion and their choice of drinks.

Outside of playing softball, Carly plans to major in biology with a goal to focus on pre-dentistry. Deciding one’s educational direction can be a hard decision for graduating seniors, but not for Carly, as she shared what inspired her field of choice, smiling with surety she stated, “When I was younger, my orthodontist really like her job, watching how much she enjoyed her work, made me want to choose the same career path.” Unlike several who try to avoid the dentist, Carly said with excitement, “When I first got braces, I loved it.”

Carly holds several records at MCHS, including Single Season Homerun Records with 7 homeruns during the 2020 season, Single Season Runs Scored with 38 runs during the 2020 season and broke the Triple Record this year by hitting 9 triples. She adds these titles, being named First Team All-State, along with being named All Conference and All District. MCR-1 Head Softball Coach spoke highly of her senior Lady Panther, stating, “I’m just so proud of her all around for her career here. She worked/works so hard and puts so much time and effort into this sport. She deserved all the recognition in the post season and I’m so excited to see her play at one of the best schools in D2. I think she has the drive and focus to be a great asset at the next level. I hope our current and future players see what hard work can do for you.”

Carly has played centerfield during her high school career, but also plays infield on her traveling teams. She began playing softball at the age of 9 years old. She said, “My favorite part of softball is fielding.” She also mentioned getting to be a part of making MCHS school history, stating, “It was pretty awesome getting to go to the Final Four my junior year, placing third in State.” She recognizes all of her coaches along the way, stating, “A combination of all of them has helped me build my softball skills along the way,” adding her thankfulness for all her family’s and coaches support.

Apart from softball, Carly also participates in Track and Field, competing in Pole Vaulting and the 300 meter and 100 meter hurdles. She also is a member of MCR-1’s National Honor Society holding the position as Treasurer, STUCO Student Body Treasurer, Science Club Treasurer and FCA.

The University of Central Missouri is located in Warrensburg. Founded in 1871, UCM is one of the oldest universities in the state. It opened its doors with only 30 students and is now home to nearly 10,000 students who represent 43 states and 32 countries. With “Education for Service,” as its motto, UCM has a rich heritage of providing unparalleled student support, exceptional academic programs and valuable learning opportunities, helping students achieve success through affordable access to a high-quality education for the past 150 years.