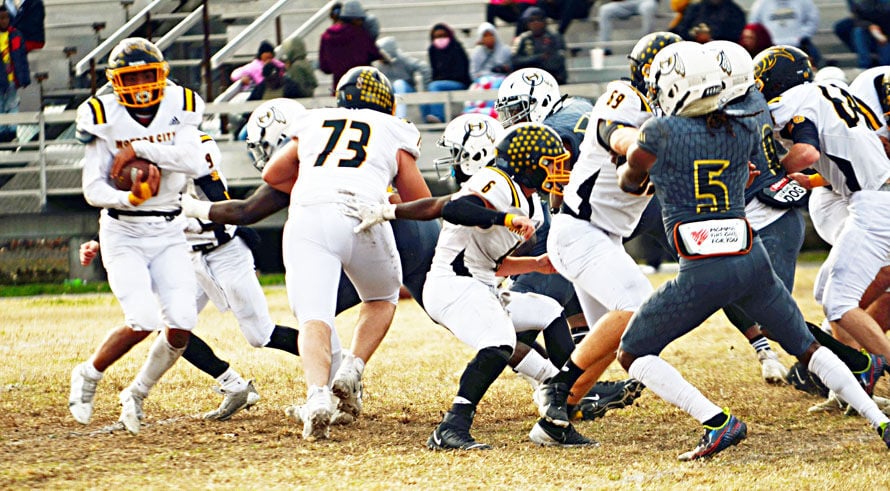 Mike Crager captures the Panther Football Team as they move the ball down the field during first half play at Hayti against the Indians. Monroe City ends their season 11-2. 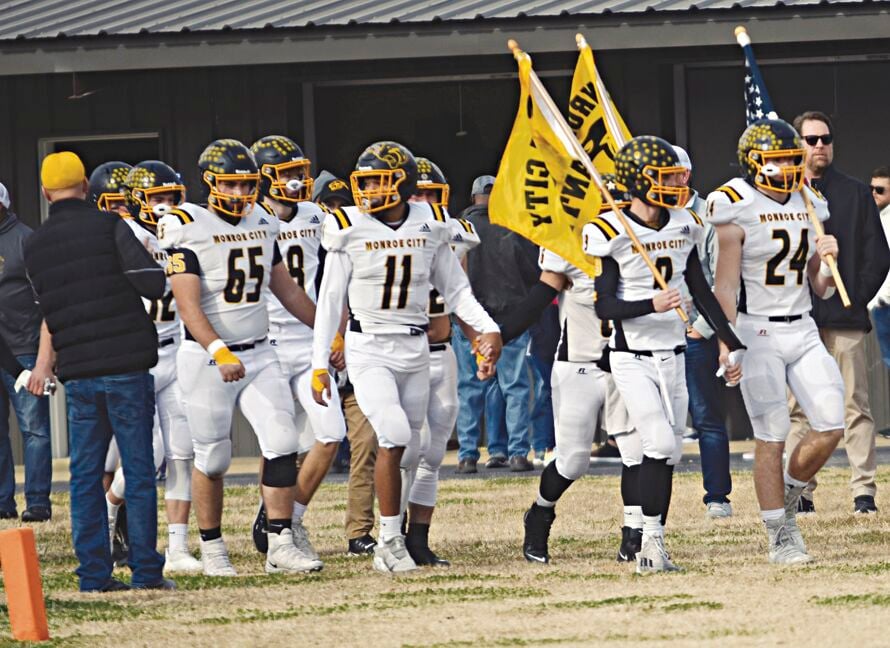 The Panthers enter the field with excitement carrying flags prior to the game, while Superintendent Tony DeGrave cheers the players on. 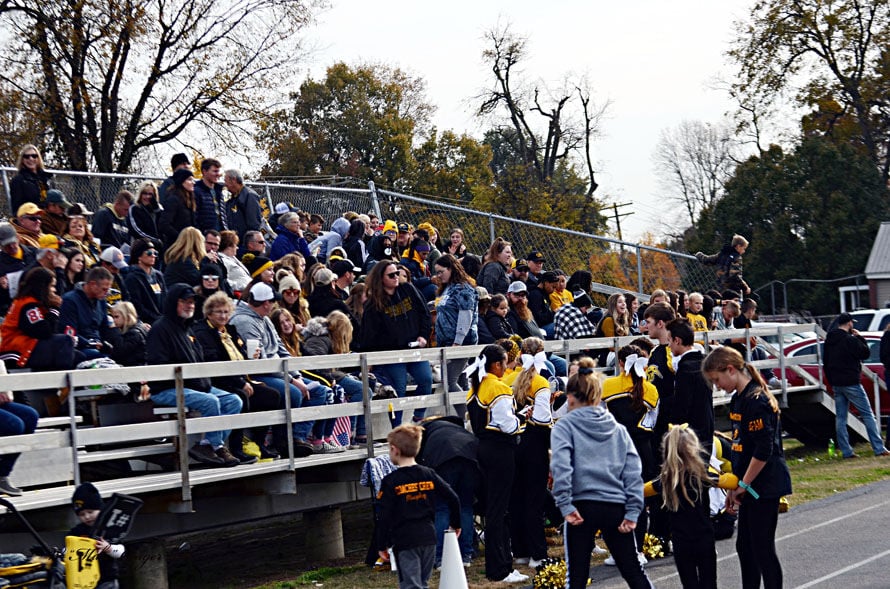 Monroe City Panther fans packed the stands to cheer on their hometown team on the road in Hayti on November 20. 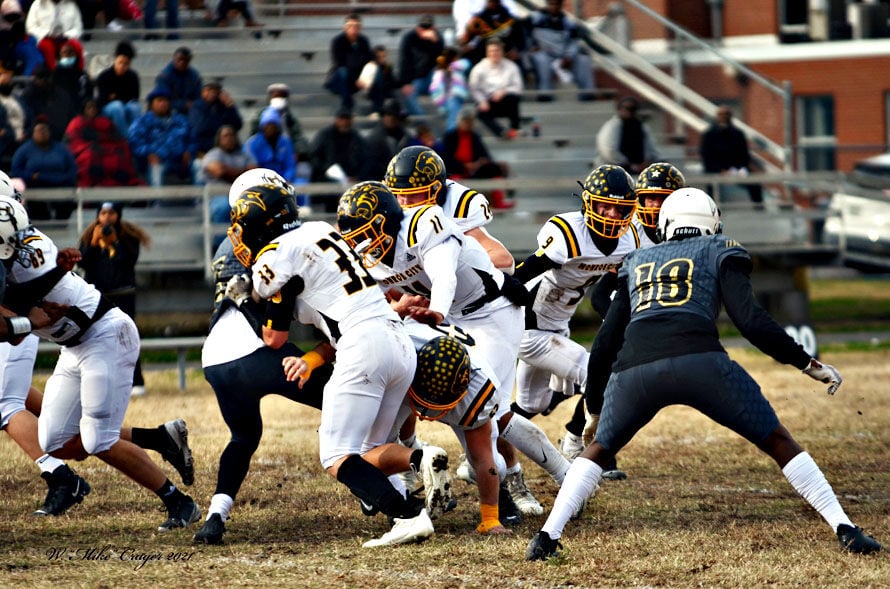 Quarterback Kyle Hays looks to pass the ball after the snap, while the offensive Panther line works to hold the line against the Indians.

A pack of Panthers work to stop the Indians from scoring in the first half of the game.

Monroe City Panthers and their fans packed up the black and gold gear and headed south to compete in the Class 1 Quarterfinal competition at Hayti on November 20. Despite the efforts of a very determined Monroe City team, the Panthers ended their season to Hayti 26-22, in a physical football battle.

Monroe City Panthers and their fans packed up the black and gold gear and headed south to compete in the Class 1 Quarterfinal competition at Hayti on November 20. Despite the efforts of a very determined Monroe City team, the Panthers ended their season to Hayti 26-22, in a physical football battle.

The team boarded a Charter bus on Friday, stopping in Cape Giradeau for the night as they made their journey. Head Coach David Kirby spoke about his team, stating, “That game was intense.  You had two great football teams playing each other in a highly emotional contest.  Our kids played to the best of their abilities for four quarters.  In the first half, we had some things go our way.  In the second half, Hayti caught a couple more breaks.  We limited their quarterback in the first half and he made some pretty amazing plays in the second half.”

On Saturday, the team arrived in Hayti to a bare field, with brown grass and began preparing for a tough football game. Fans packed the stands, as the Monroe City community filled the bleachers, showing their support by making the long haul down the road to cheer on their hometown team.

The first quarter opened with Hayti having control of the football. A fumble would allow the Panthers to gain possession, moving the crowd to their feet, creating the side lines with an atmosphere of cheers and claps. Monroe City worked to gain yards play after play. Deion White would find the first opening to make it to the end zone, putting the first touchdown on the scoreboard, followed by Landan Utterback making the play for the 2-point conversion, bringing the score to 8-0.

As Hayti took possession, their offensive play wouldn’t last long against the Panthers defense, who read their next move and made an interception.

As the Panthers continued to show their offensive skills, they inched down the field, driving yard after needed yard, using Ceaton Pennewell as a powerhouse to punch through the line and make the first down. Reaching the end zone territory, Joshua Talton found a hole and scored a touchdown, but the 2-point conversion would be no good, bringing the score to 14-0.

In the second quarter, Cade Chapman made a touchback, stopping the Indians from scoring. Monroe City fans continued to cheer on their home team as halftime neared on the clock. The Panthers defensive team continued to work hard making tackle after tackle, with Landon Holland and William Ball wrapping up the Indians play after play.

Just before halftime, Pennewell ensured the Panthers drive was well worth their physical effort, adding one more touchdown to the scoreboard, and Utterback making the 2-point conversion, before heading to the locker room, with the score 22-0.

Unfortunately for the Panthers, the second half of the game would shift in Hayti’s favor, as the Indians gained momentum and the Panthers fought to keep the lead. As the Indians adjusted their plays, Monroe City would not be able to score the rest of the game. Hayti worked to find the end zone, finding their way down the field in minutes to make a touchdown. Their quarterback seemed to dance his way out of tackles to make the plays needed to send his team into the winning zone.

Monroe City’s quarterback Kyle Hays adjusted a few plays himself, as he attempted to run the ball down the field, gaining a much needed first down to move the Panthers towards their end zone. Each teammate displayed countless efforts to fight for the win, as the adrenaline grew throughout the stadium with shouts and exclamation to push each team.

With approximately a minute left on the clock, Monroe City gained possession of the ball and had one shot at gaining the lead to win. The Panthers gave everything they had as they moved the ball down the field. On the last play of the game, Hays attempted to pass the ball to the end zone, when a talented Indian reached for the sky intercepting the football with only 5 seconds left, ending the 2021 Monroe City football season for a talented team. Coach Kirby stated of his seniors, adding, “I will miss the passion they brought to the game.  They played so hard for each other.  They had an exceptional senior campaign and created many memories.”