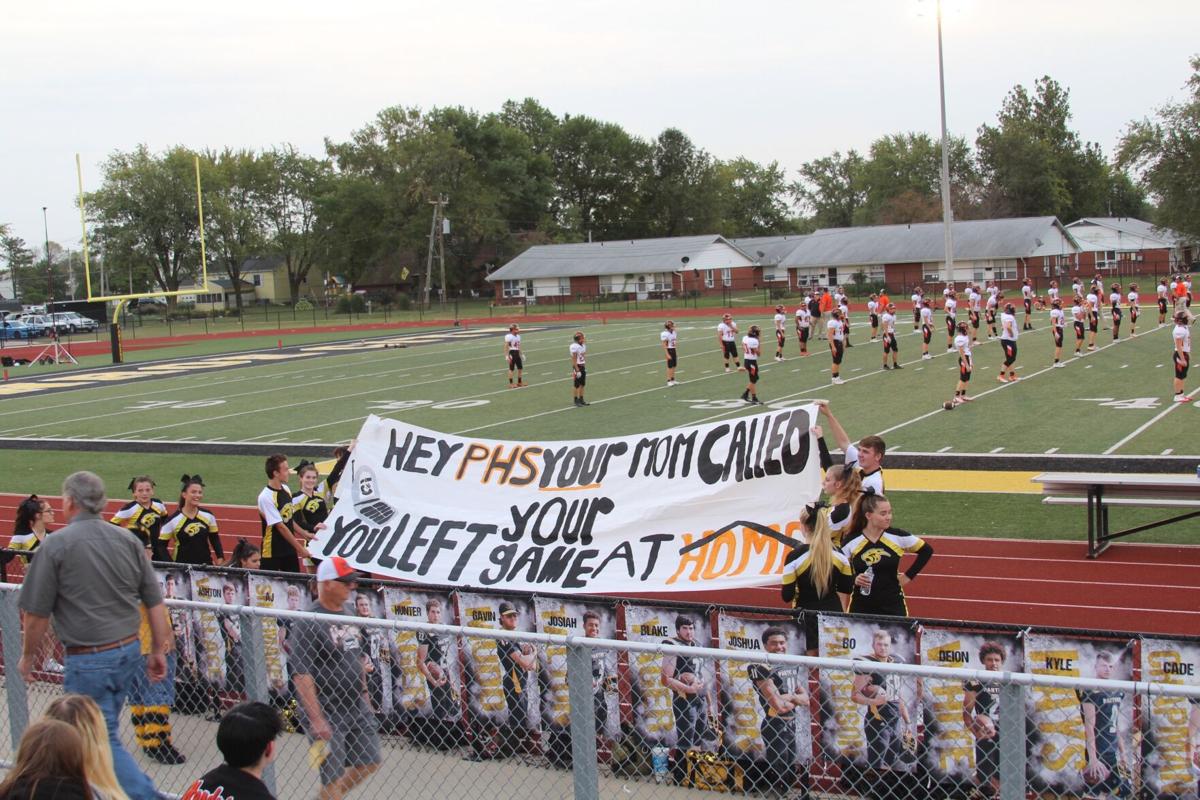 Cheerleaders motivate crowd prior to the start of the Homcoming game on Sept. 24 against Palmyra at Lankford Field. 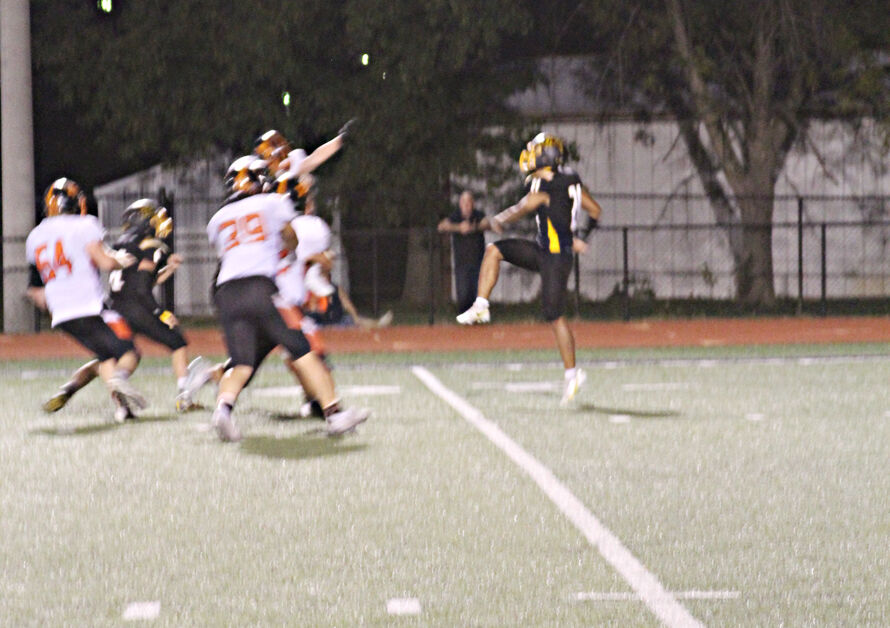 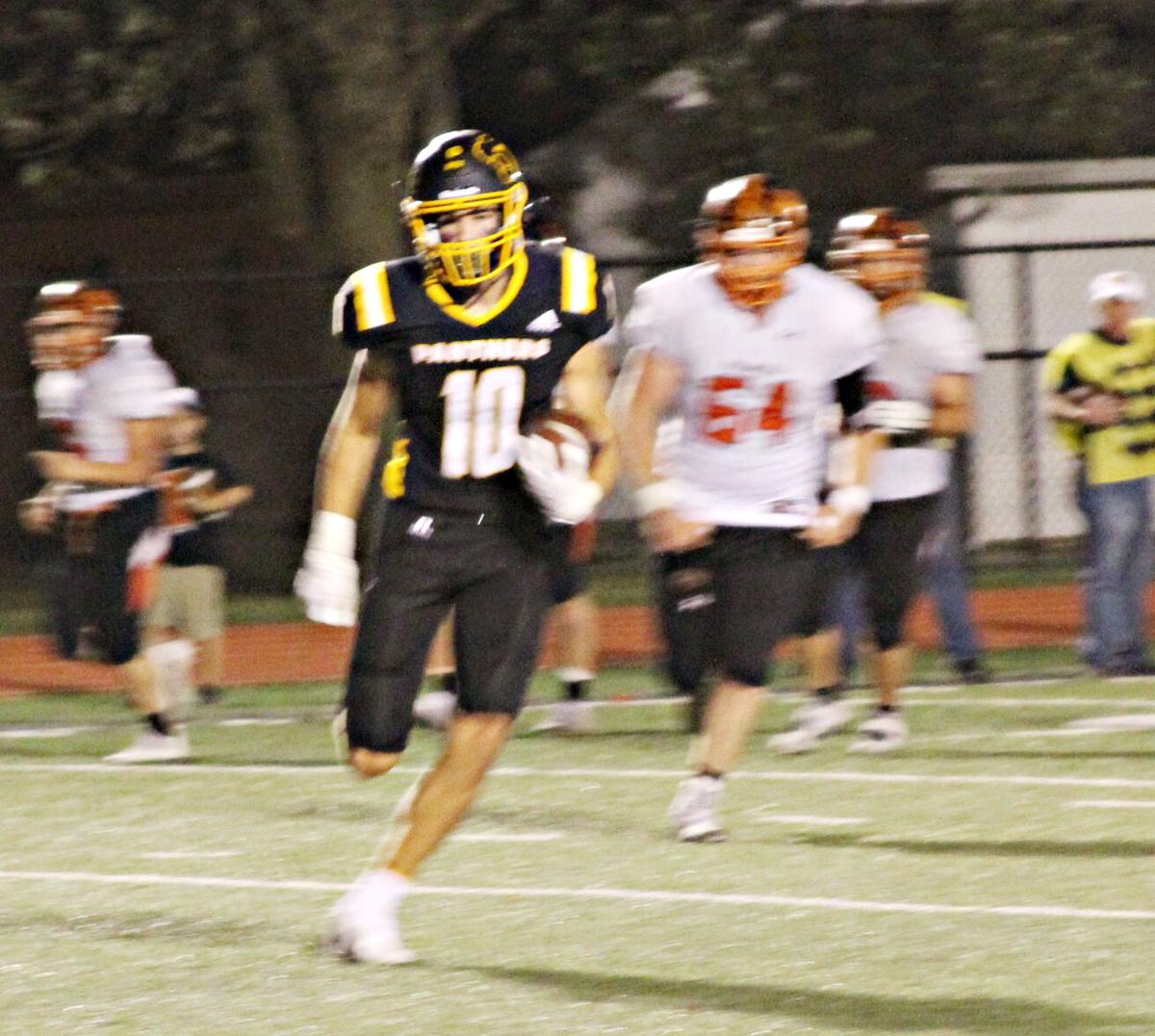 Waylon DeGrave runs the football down the field gaining yards for the Panthers in Friday nights rival game. DeGrave had 5 catches and 147 yards.

Friday night lights brought out the Panther Fans on September 24 for the rival game between Monroe City and Palmyra to celebrate Homecoming and the Mayor’s Cup game all in one. The atmosphere and crowd participation would make by-standers believe it could have been a play-off game with intense cheering for their home teams from both sides of the football. Head Coach David Kirby stated, “We were able to create a few extra offensive possessions through special teams’ plays.  We had a big onside kick recovery and forced a fumble on a punt.  These two extra possessions were crucial in our victory.”

During the first quarter, Monroe City was able to complete a number of passes by quarterback Kyle Hays, and pick up several yards with Deion White, Joshua Talton and Waylon DeGrave. The first touchdown was completed by Ceaton Pennewell, but the 2-point conversion failed. Palmyra attempted to rally back, but turned over on downs. Hays then completed several more passes with Talton finding the end zone for a touchdown, bringing the score 12-0.

Moving into the second quarter, Monroe City continued to stay strong, but Palmyra was able to get on the scoreboard, making the game 12-7. Trying to secure a lead, Hays spots White in the end zone and adds another touchdown to the score before halftime with 18-7.

Palmyra returns from the locker room with the intention to stop Monroe City offensively, as the game became a quarter of back and forth, turning the ball over on downs several times and adding a few fumbles from both packs of Panthers and keeping the ball from touchdown territory.

Coach Kirby explained the strength of both teams, adding, “You have to win those tough, close games. This game showed the kids that we need to be more focused on playing assignment sound football.”

Palmyra went on to score one more touchdown, but despite their effort to obtain a victory, they would only gain one more touchdown, ending the game with a Black and Gold Panther victory, 18-13, holding strong with an undefeated season record 5-0. “We are blessed with some special athletes and we will continue to find ways to get the ball in our athletes’ hands,” said Coach Kirby. The Panthers had 110 rushing and 215 passing offensive yards.