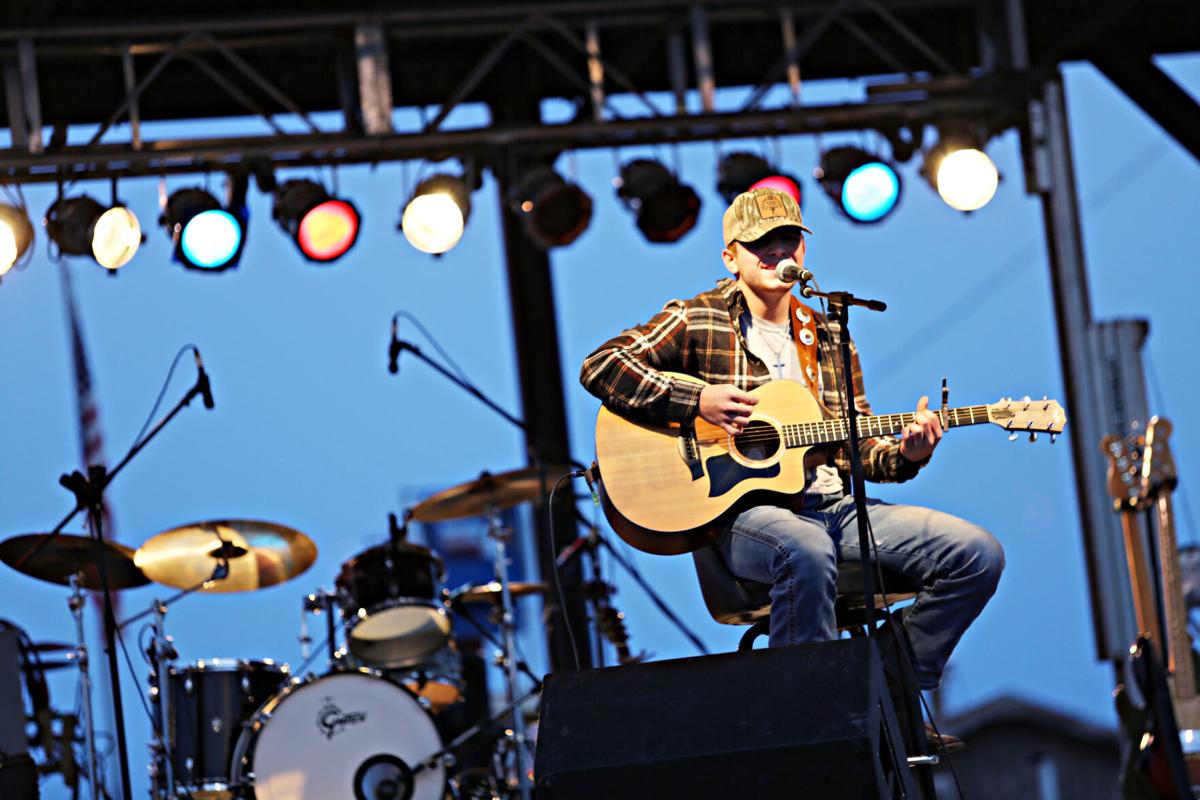 Philadelphia born, Carson Bock plays acoustic for a crowd of more than 300 visitors at the 33rd Annual Old Threshers in Shelbina on Saturday, Sept. 19, opening for Drew Baldridge of Nashville.

The thirty-third annual Northeast Missouri Old Threshers continued on as scheduled despite the COVID-19 pandemic. The annual event brought many together during the four-day event with activities and events for all ages.

On Thursday, September 17, the festivities kicked off with a Tractor Ride. Several different brands of tractors lined up at 9 a.m., each showing off their differences from their antique appearances to the development of newer models throughout the years. Later in the day, guests enjoyed a fish fry and talent show.

The following day, on Friday, September 18, several ponies arrived to take part in the Pony Horse Pull. The Baby Show was also held in the Grand Stands. Several area babies, along with their families came to watch the contest. Walking away with Best of Show, was Georgia Hirner, one year old daughter of George and Kelly Hirner, of rural Monroe City.

On Saturday, September 19, a parade was held a 12 p.m. to celebrate 33 years of Northeast Missouri Old Thresher fun. Later that evening, people gathered with their lawn chairs to enjoy live music. The musician in concert was local singer songwriter, Carson Bock. Bock wowed the crowd with his musical talents. The crowd was seen clapping their hands, singing and dancing along, as they enjoyed the young local artist’s performance.

Next, Drew Baldridge, of Nashville, Tennessee set the stage with his hit singles. Baldridge was born in Patoka, Illinois in 1992. He began performing in local talent contests as a teenager, and moved to Nashville, at age 18 to pursue a career in country music. In promotion of his album, Baldridge has toured with Lee Brice and Cole Swindell.

The festival included a flea market each day with vendors for those in attendance to shop. There were booths with several types of tools, wood working items, homemade candy, signs and flags along with several crafts which included homemade candles and jewelry.

Throughout the weekend for the children were free kids rides including a steam powered merry-go-round, barrel trains, pedal tractors, Ferris wheel and sand pits.

There was an old town available to walk through with school house, church, train depot, petting zoo, blacksmith shop and fur trading post. The town had people there to reenact the time era with costumes and activities to represent the time period, including a civil war reenactment.

Earlier in the week the festival was open for local elementary schools to enjoy field trips. This gave students a chance to come experience and learn machines, tractors and trades of the past.