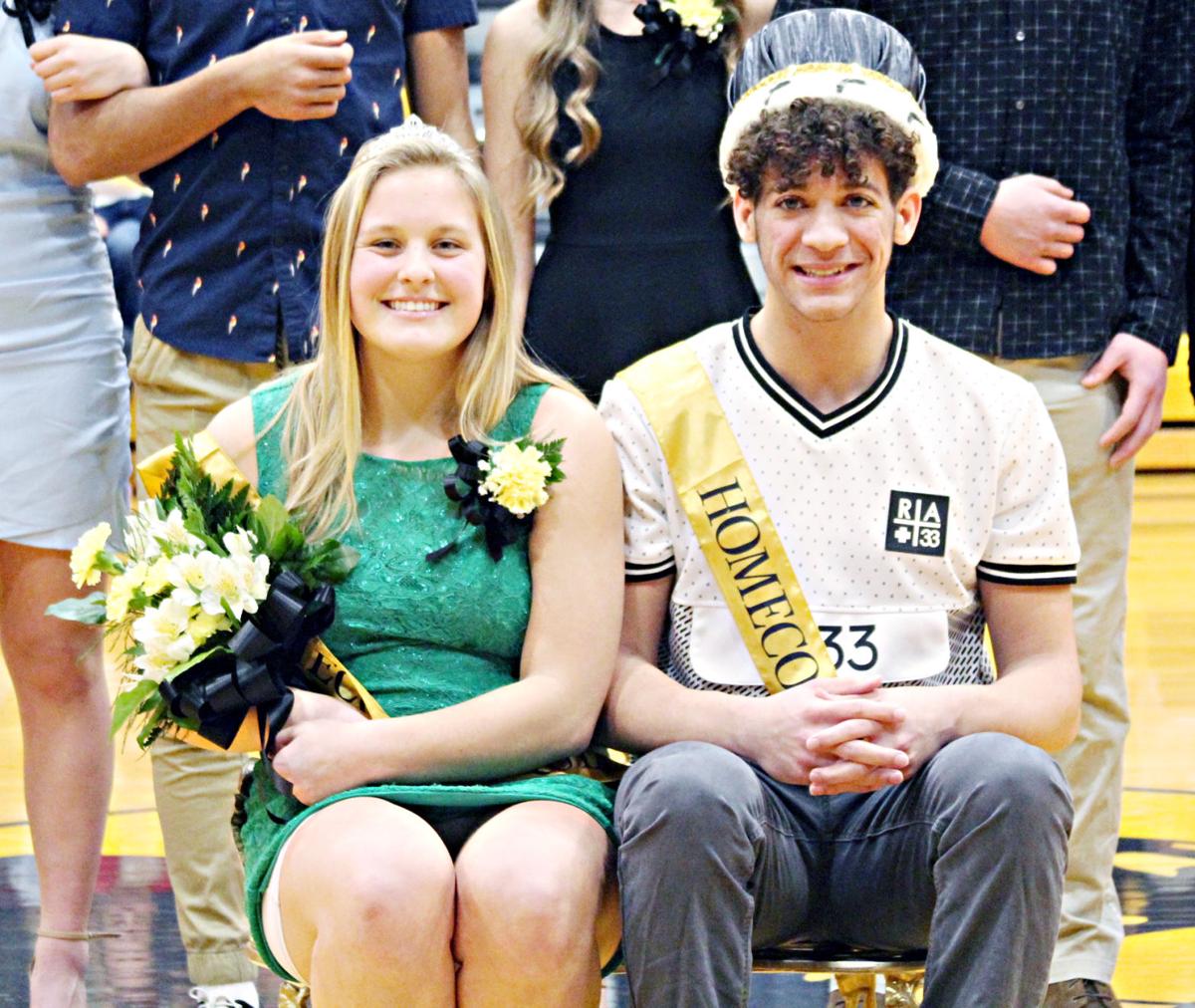 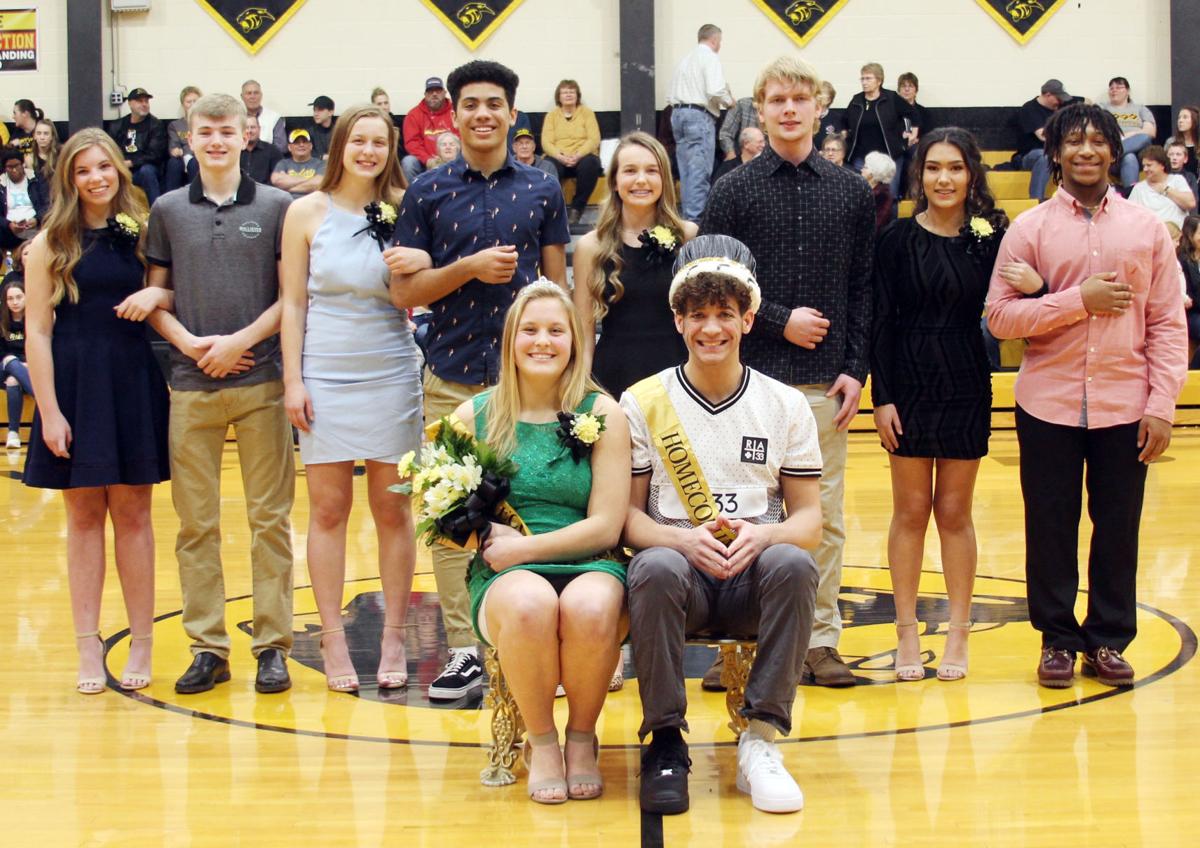 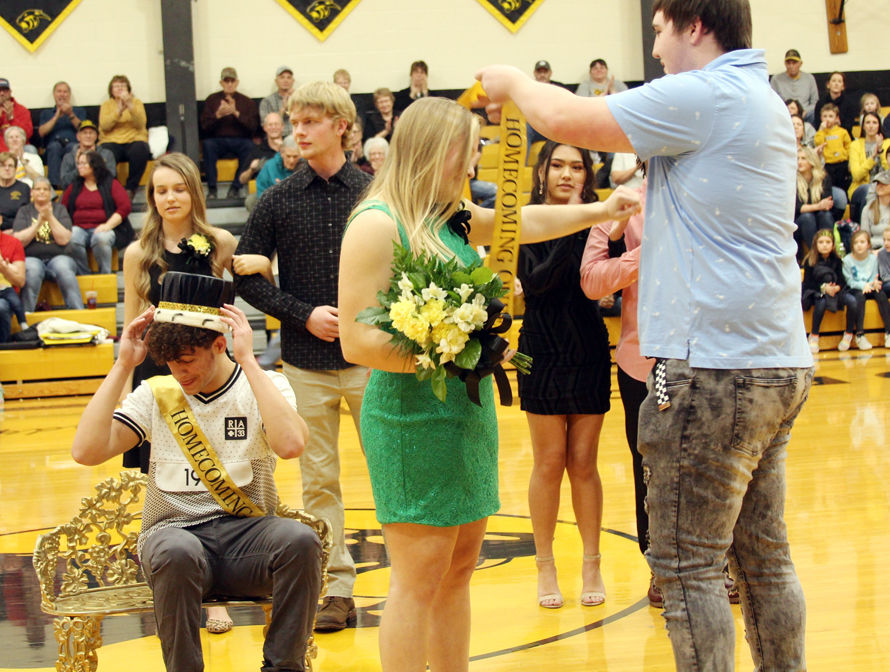 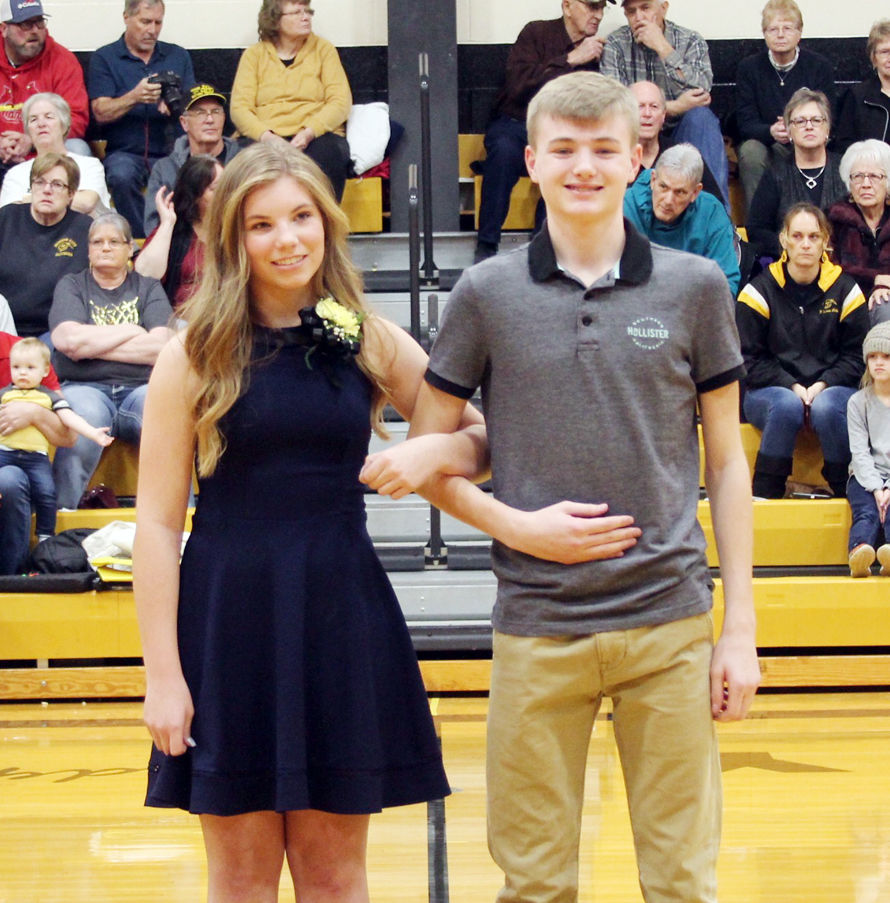 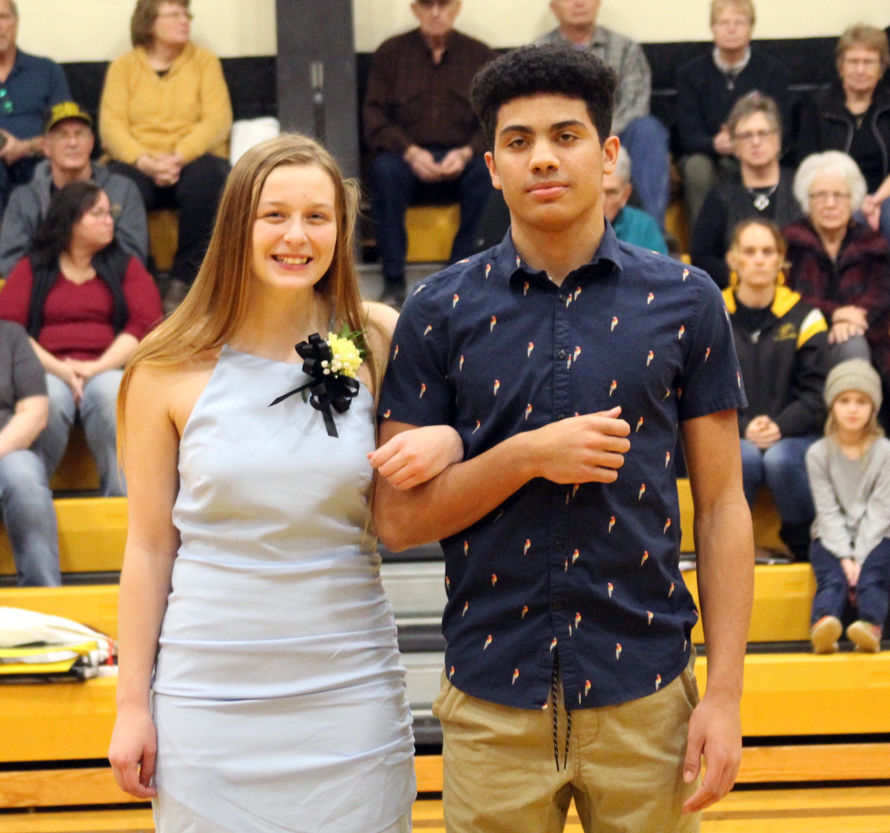 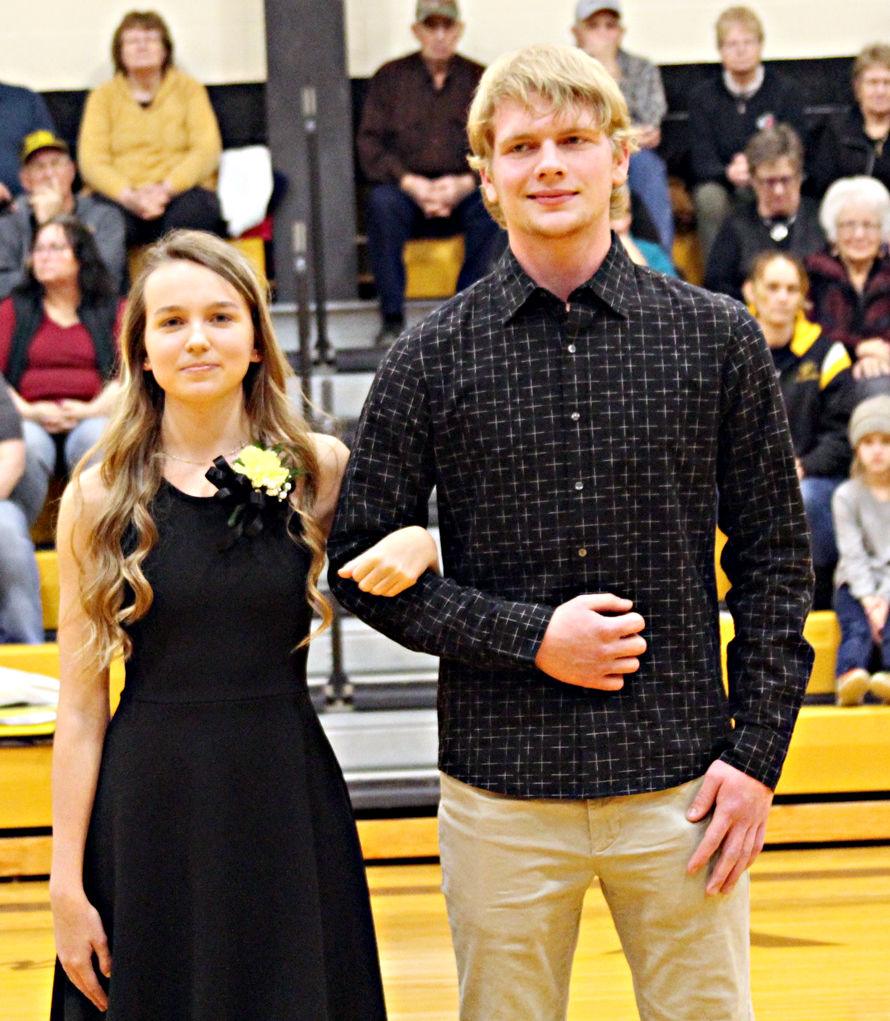 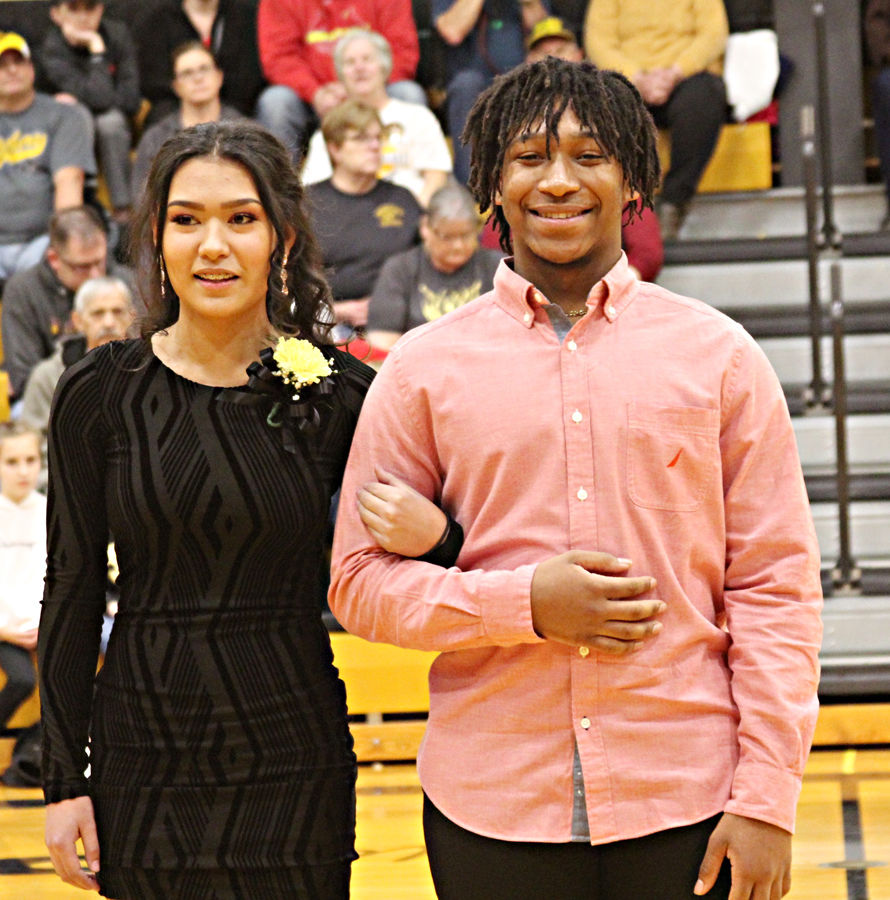 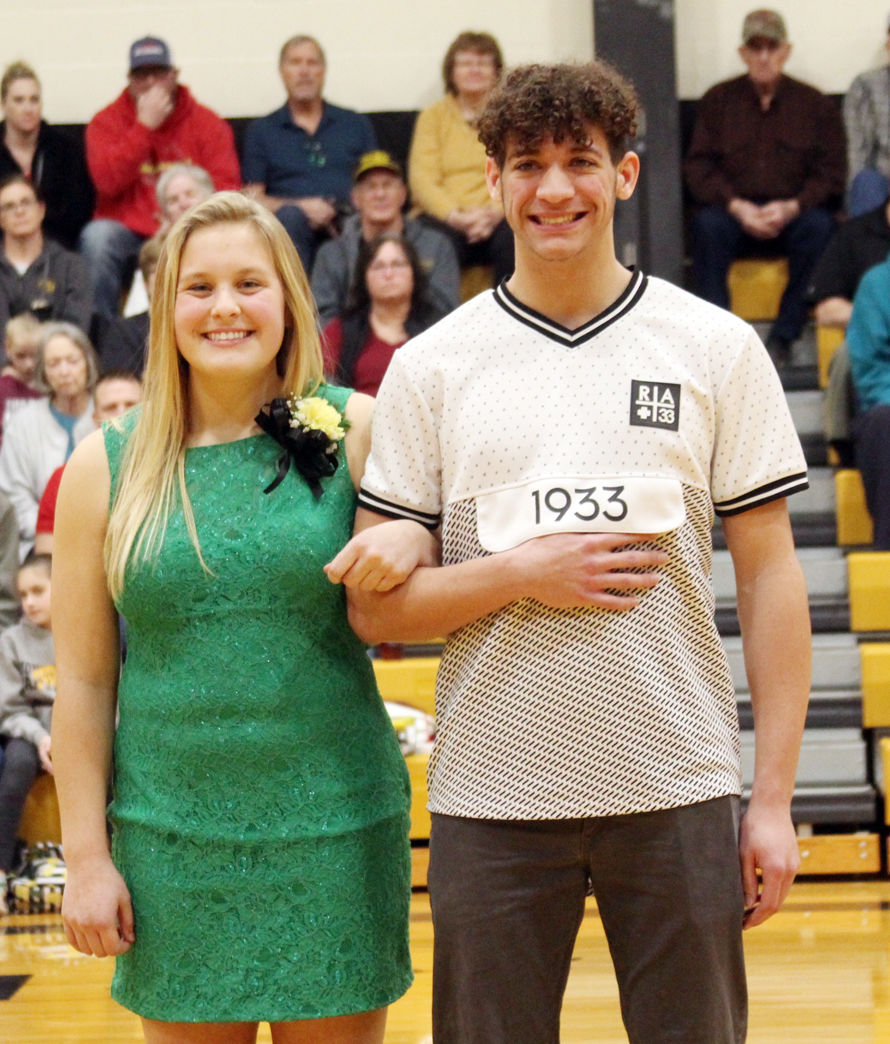 The Monroe City High School held their annual Homecoming Royalty crowning on February 7, after being cancelled in January due to weather conditions. The 2020 Coronation took place between the Junior Varsity and Varsity girls game against Bowling Green, crowning Bryce Stark and Madelyn Meyer as this year’s royalty. The Lady Panthers were able to make it a homecoming victory, winning over Bowling Green, 73-17.

This year’s homecoming attendants were Seniors, Madison Hadley and Antwuan Battle, along with Madelyn Meyer and Bryce Stark. Representing the Juniors are Hannah Wheeler and Matthew Barnes, the Sophomore class nominees are Mckinnley Meyer and Joshua Talton and the freshman class is Maddie Gomez and Reece Buhlig.

The Homecoming nominees were announced as they walked to the center of the court. Representing the freshman class were Maddie Gomez and Reece Buhlig. Reece is the son of Jon and Shelley Buhlig. He plays football, basketball, and baseball. Reese enjoys playing sports with friends.

Maddie is the daughter of of Megan Gomez and Kory Hortsmeyer. She plays softball and is a member of the MCHS Dance Team. Maddie is also a member of Book Club, Art Club, FFA, and Student Council. She attends Holy Rosary parish and works at Gosney Pharmacy. Maddie enjoys hanging with friends.

Next, the sophomore nominees were announced as Mckinnley Meyer and Joshua Talton. Joshua is the son of Ed and Lisa Talton. He plays football, basketball and runs track. Josh is a member of Book Club, FCA, and FBLA. He attends PFC Family church and works at BK’s Place. Josh enjoys fishing, playing fortnite, and hanging with friends. Mckinnley is the daughter of Missy Lane and Matt Meyer. She plays basketball and softball. McKinnley is a member of Student Council, Book Club, and FCA. She attends the Hannibal Church of Christ. Mckinnley enjoys babysitting, talking to friends, being around kids, watching Netflix, and hanging out with her mom.

The junior class nominees were Hannah Wheeler and Matthew Barnes. Matthew is the son Brett and Rachel Barnes. He is a member of FFA and National Honor Society. Matthew is involved in the Immanuel Lutheran Church Youth Group. He sells firewood, helps on the family farm, and works at Tri-County. Matthew enjoys hanging out with friends, working on his truck, and off-roading. Hannah is the daughter of Tyler and Heather Wheeler. She runs track and cross country and is a member of the MCHS Dance Team. Hannah is in Book Club, NHS, and FFA. She works as a lifeguard at the Monroe City Pool. Hannah enjoys hanging out with her friends and family.

Representing the seniors were Madelyn Meyer and Bryce Stark, along with Madison Hadley and Antwuan Battle. Bryce is the son of Jason Stark and Kelly Stark. He plays basketball and runs track. Bryce is a member of FCA. He works as a lifeguard at the Monroe City Pool. Bryce enjoys playing video games and basketball and hanging with the bois. He plans to play college basketball and get his BSN.

Madelyn is the daughter of Missy Lane and Matt Meyer. She plays softball and basketball. Madelyn is a member of National Honor Society and Science Club. She helps with concession stands and track meets, and helps with the Church of Christ community. Madelyn is a lifeguard at the YMCA. She enjoys playing basketball and hanging out with Kaelin. Madelyn plans to go into the medical field.

Antwuan is the son of Monica and Brandon Stanton. He plays football and basketball. He is a member of FCA. Antwuan works as a lifeguard at the Monroe City pool. He enjoys hanging with friends and playing xbox. Antwuan plans to attend college and become an athletic trainer.

Madison is the daughter of Randy and Therese Hadley. She is a member of MCHS Choir, Student Council, Panther Players, Art Club and Hands for Hope. Madison volunteers singing at community and church functions. She works as a tower guard at the Mark Twain Landing. Madison enjoys watching “The Office”, playing with her dog, playing guitar, singing, and hanging out with friends. She plans to earn a Master’s degree in Art and Spanish Education at Truman State University, become a fine arts teacher, travel to places around the world, and adopt as many dogs as she can.

After each had reached the center of the court, the royalty was announced by the Student Council officers. The 2020 Basketball Homecoming King, Stark, received a crown and Queen, Meyer received her tiara and a bouquet of yellow roses as the two took the throne by sitting center court on the bench provided wearing their royalty sashes.

Presenting the crowns were Cole Yager, Student Body President and Spencer Fuller, Senior Class Vice President.  Following the game, a homecoming dance was held for the student body to enjoy.