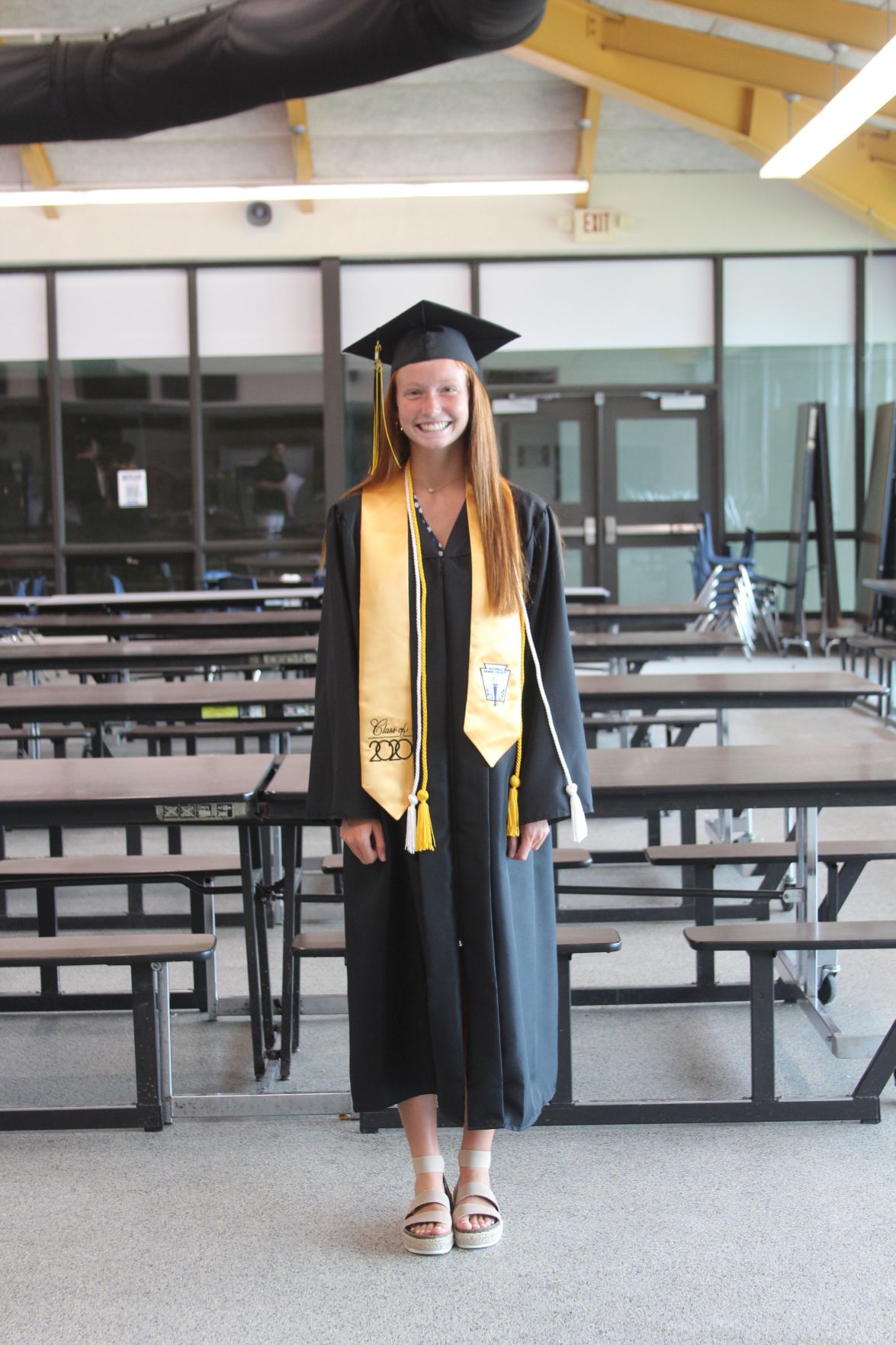 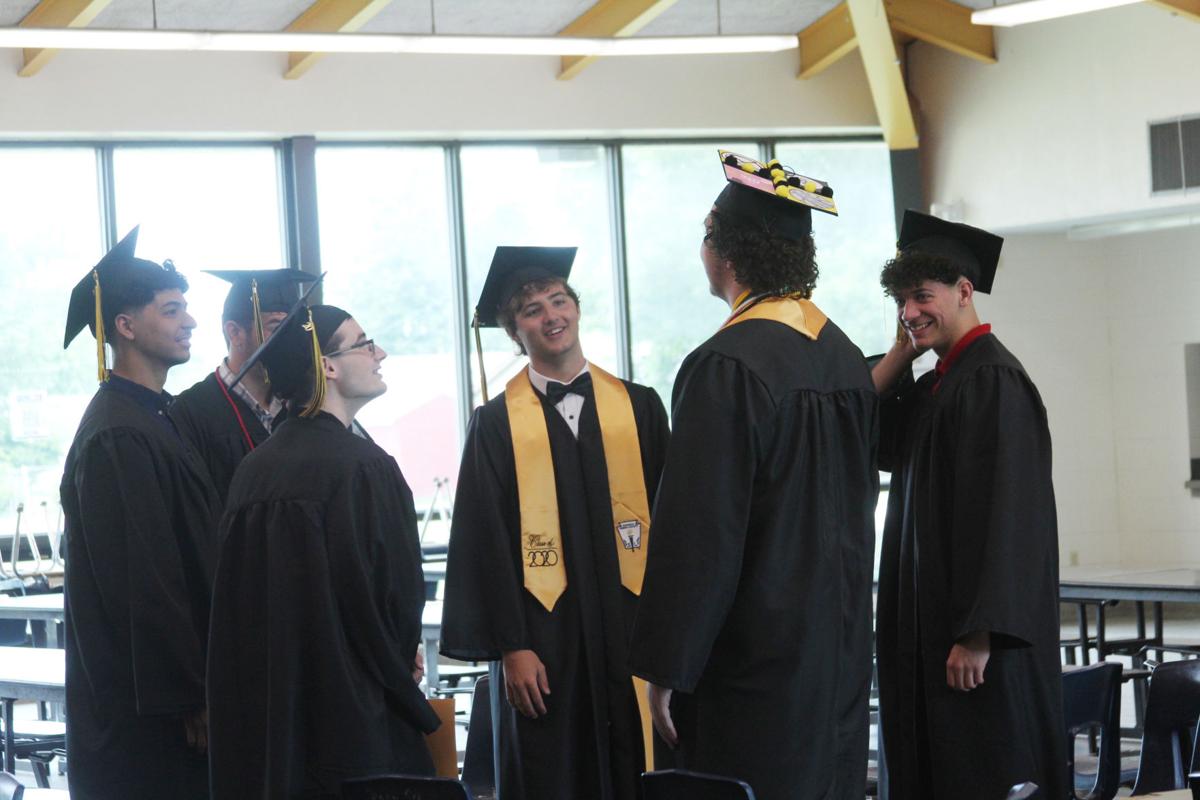 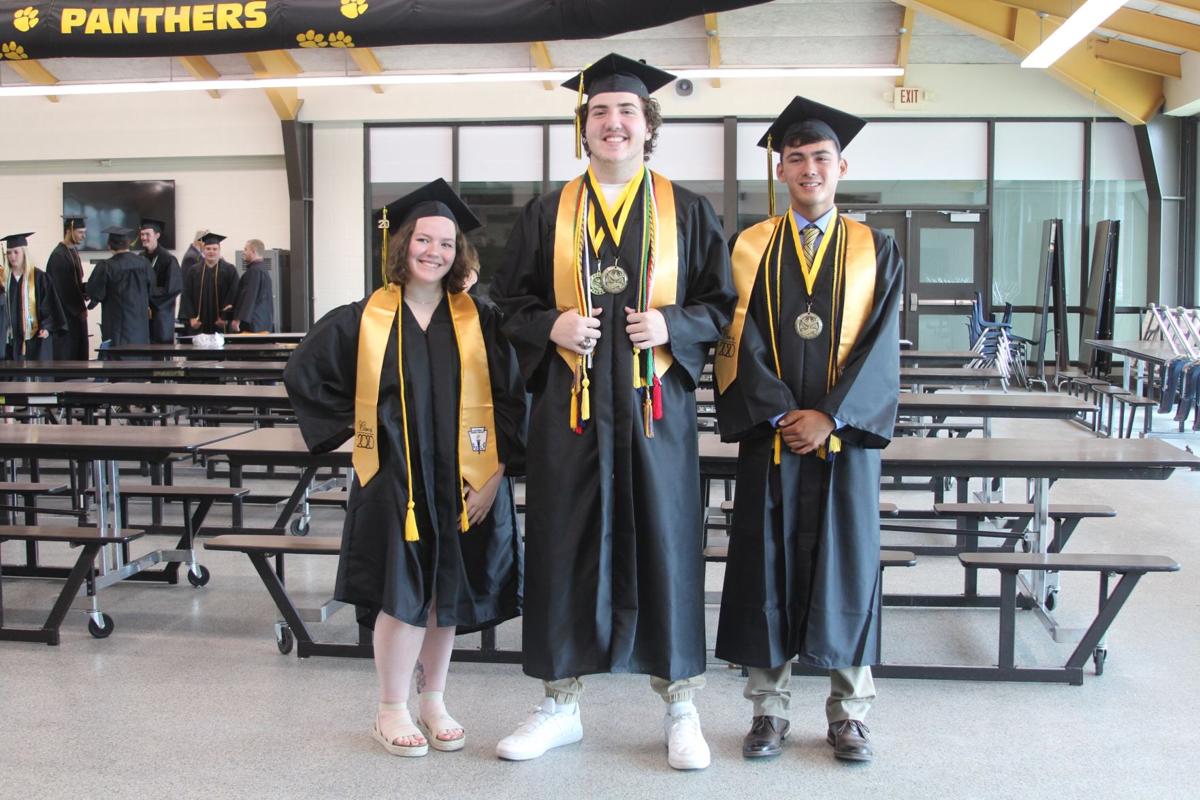 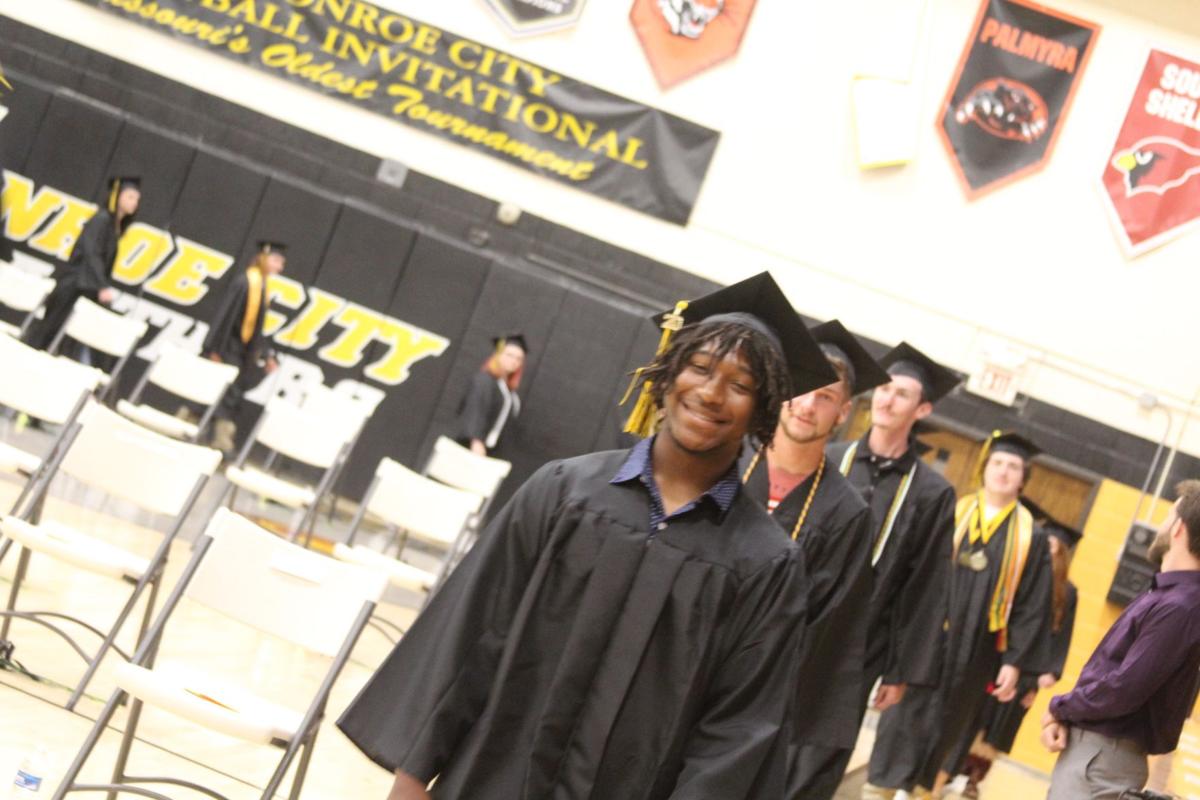 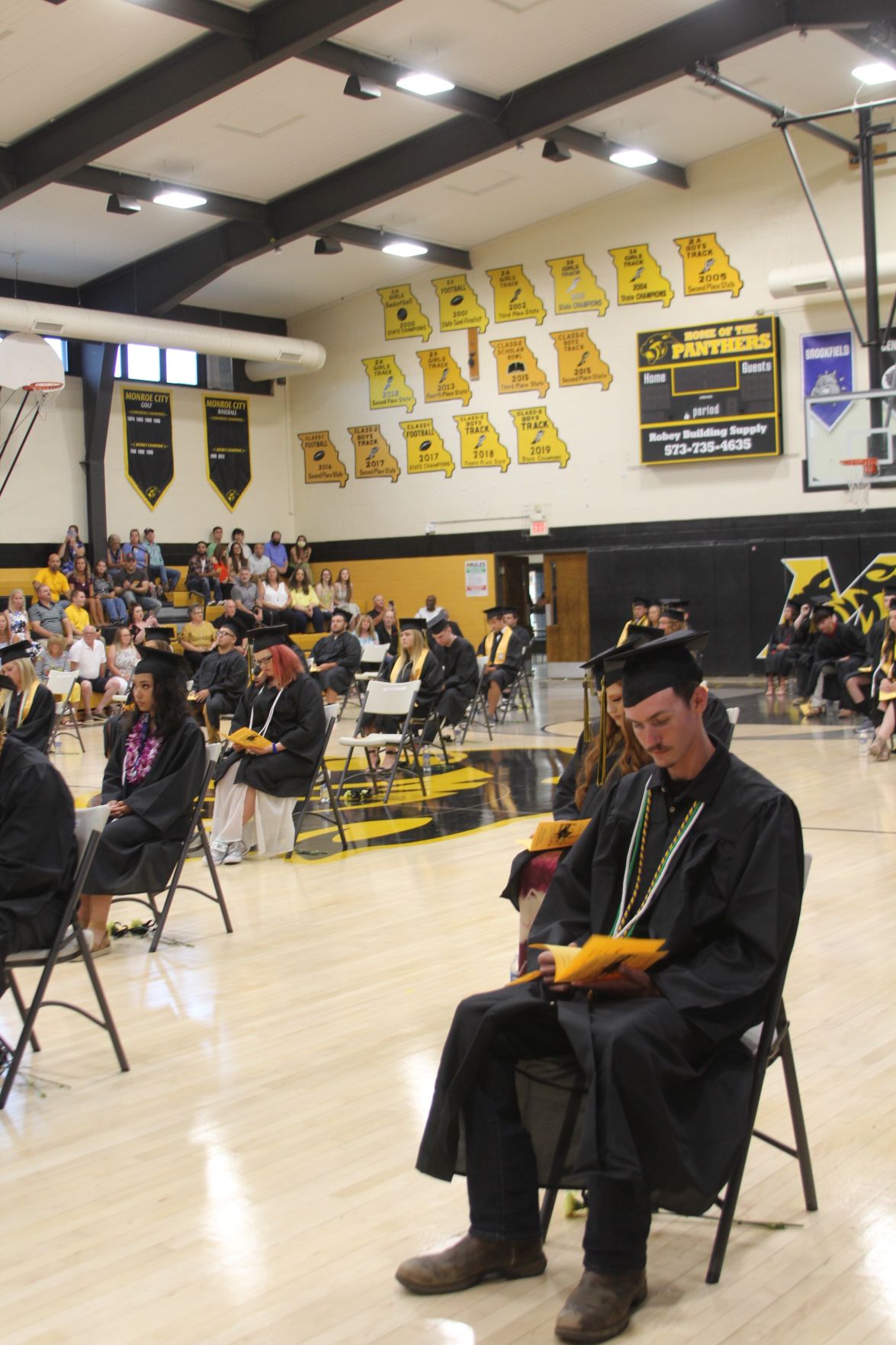 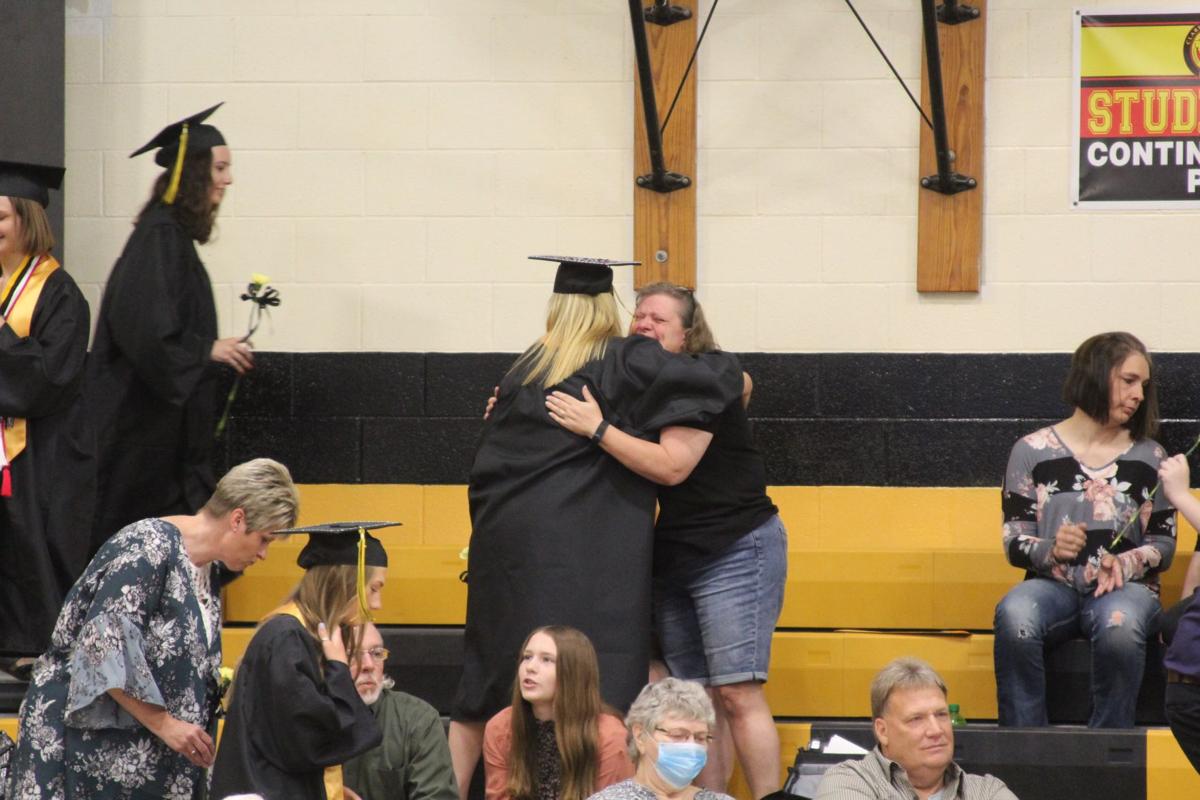 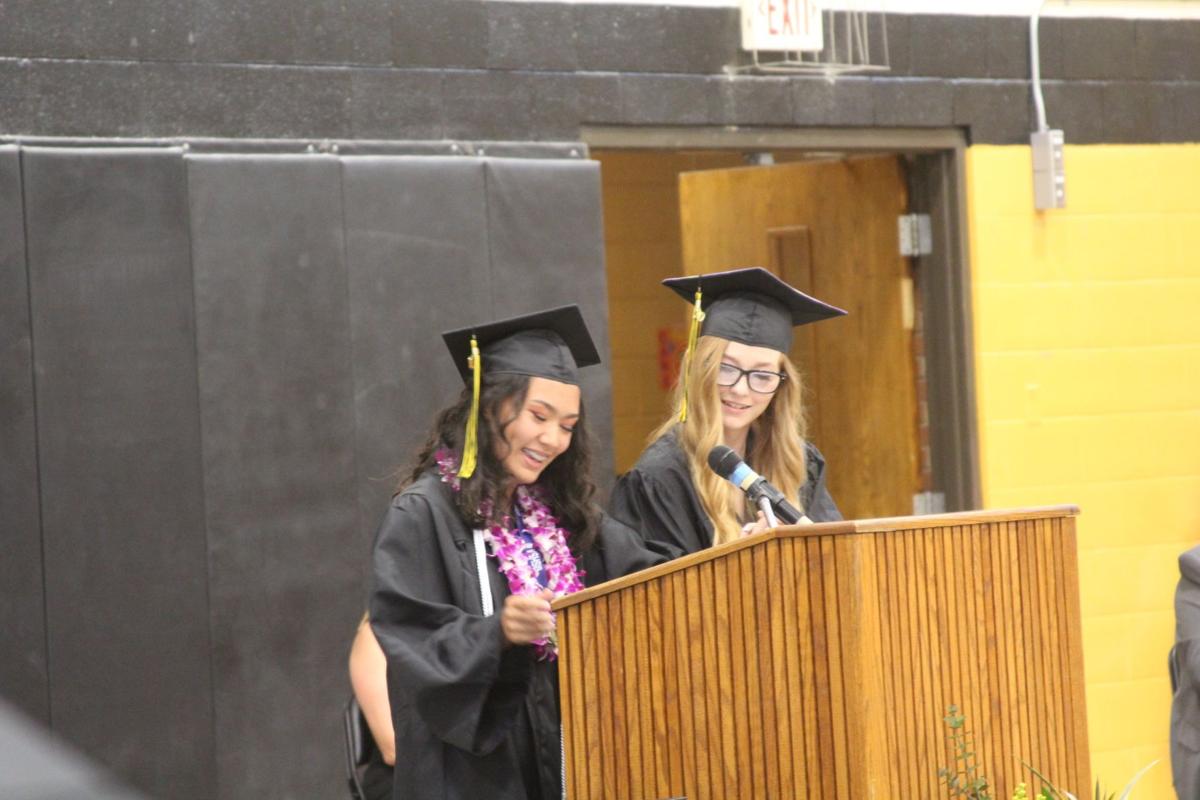 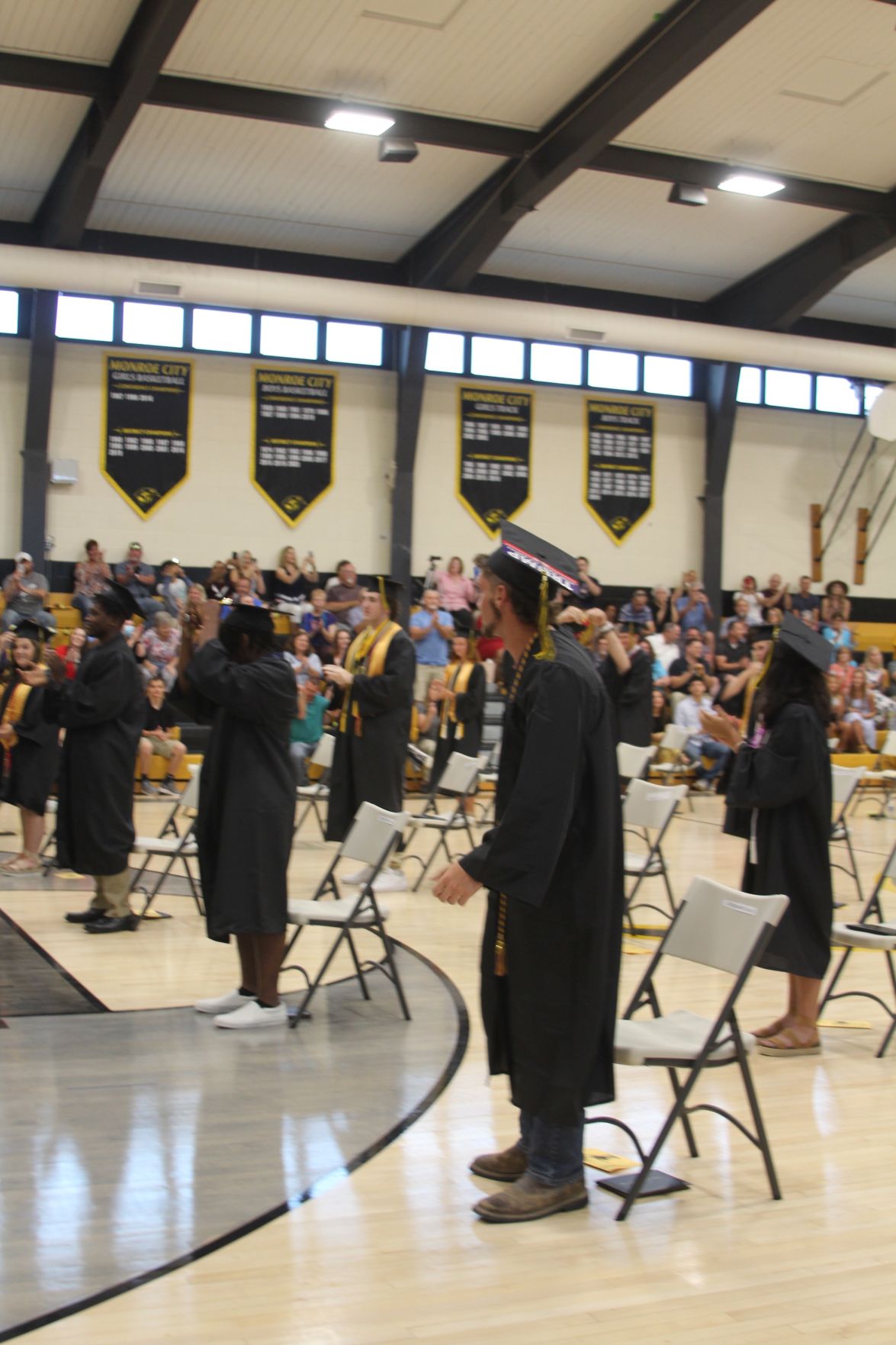 There were 59 seniors who had attained the credentials to receive their high school diploma. Of those students, 55 entered the gymnasium during the processional, one student at a time, taking one last walk around the gym as the Class of 2020, taking their seats on the floor in front of the podium. Due to the COVID-19 Pandemic there was limited attendance and the Monroe City High School Band was not able to play the traditional Pomp and Circumstance as the graduates entered.

All graduating students sat in their black cap with gold tassels and black gowns facing the Board of Education.

Graduates decorated their caps with flowers, glitter and different phrases. The bleachers were filled with family, friends and faculty at the commencement ceremony in sets of four separated by six feet of space in an effort to practicing social distancing during the event.

Principal John Fortney opened the ceremony by thanking everyone for coming, introducing Cole Yager, who gave the opening welcome. Yager delivered the welcome, as he addressed his class with encouragement.

Then, Superintendent Dr. Tracy Bottoms gave opening comments. Dr. Bottoms addressed the Class of 2020 keeping it short and simple by congratulating the students, reminding them that they are a class who faces adversity, stating “The Class of 2020 is a class who overcomes challenge,” as Bottoms reflected on 911 and explained they had been born during a time of hardship in our country.

After the musical performances were complete, the graduates gave yellow carnations to people of significance in their life. Many gave their parents, grandparents and loved one’s hugs and shared words of encouragement and tears before returning to their seats.

Next, Principal Fortney recited the class motto and speech of Kayla Spence, who was absent for the graduation. The class motto was a quote from Walt Disney, stating, “We keep moving forward, opening up new doors and doing new things because we are curious…and curiosity keeps leading us down new paths.”

Ms. Kayla Murphy, guidance counselor, gave the scholastic recognition to the Class of 2020 asking for those planning to join the military to stand, then those with plans to join the workforce, followed by the students who had chosen to attend a two-year college or technical school and ended with the seniors who would be attending a four year college or university.

Principle John Fortney gave the announcement of honors. The George Washington Carver Award is given to the top 10 percent of the class. Next, Fortney announced the Salutatorian, as Kayla Spence and the Valedictorian as Cole Yager and Spencer Fuller.

Prior to the presentation of diplomas, Spencer Fuller, gave the farewell comments addressing his class and the audience. Fuller started his speech out with a short melody Fuller style causing the audience to embrace his talented way to make others laugh. Fuller addressed his class sharing memories and appreciation of the past opportunities they had experienced. He ended his speech stating, “The Class of 2020 is signing out.”

Next, the graduates were presented with their diploma, as the graduate made the walk to obtain the goal that had been set for the last 13 years. An emotional presentation was included during the graduation, as Jeff and Suzanne Quigley, stood to receive their son’s diploma, Donald Quigley. The audience stood emotionally giving honor and support to the family in remembrance of Donnie’s accomplishments at MCHS.

After all the diplomas were in hand, Daniel Dennison stood in front of his class, leading each graduate to move their tassels from right to left. Fortney gave closing remarks as he announced the Monroe City High School Class of 2020 graduates. The graduates threw their hats in the air and gave shouts of exclamation to celebrate. The graduates left the gymnasium as the crowd cheered. Friends and family members met the graduates outdoors to congratulate them and take pictures.