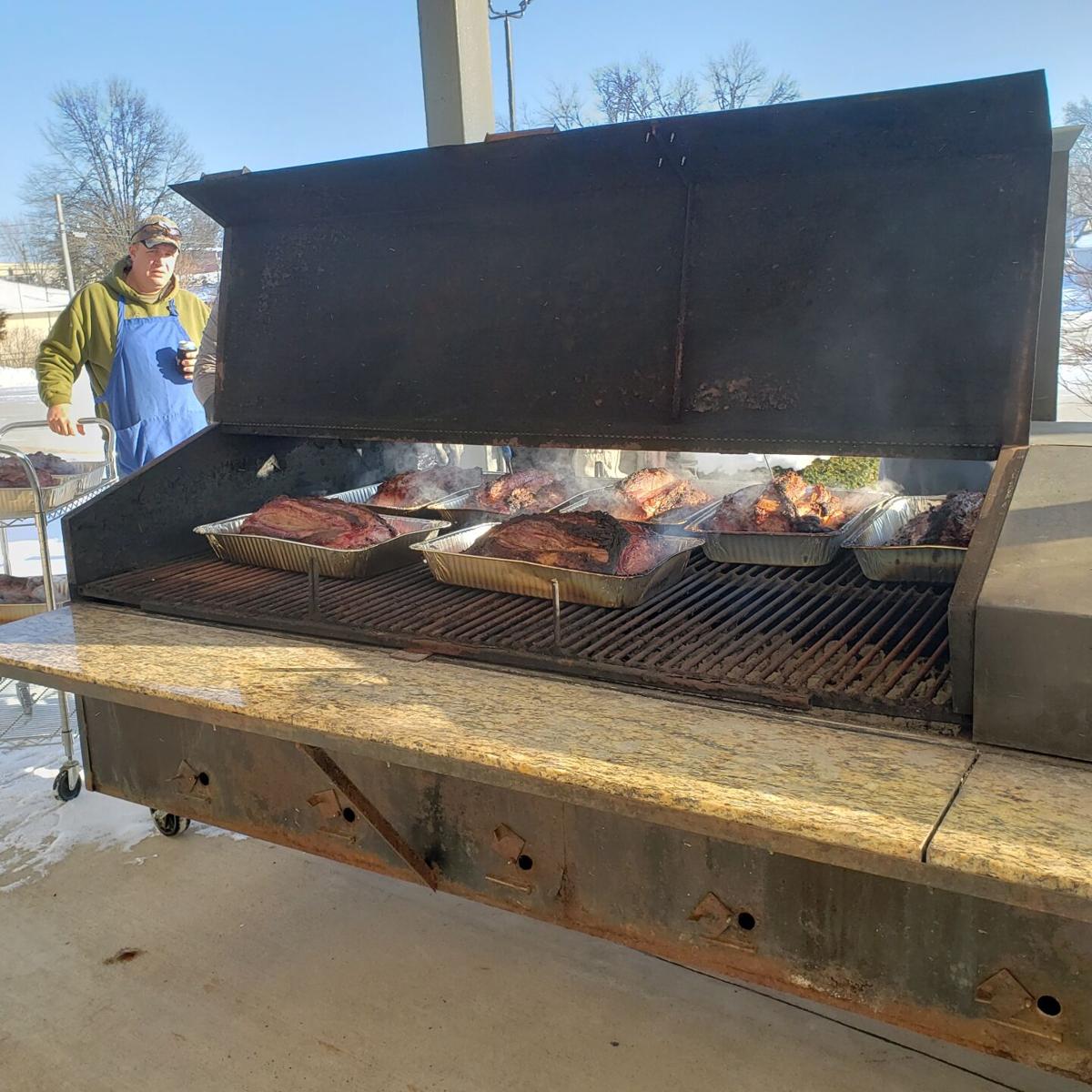 Even though it was a cold, cold, day, John Ritter and his crew did a great job of preparing delicious prime rib for the annual Lucky Hearts Event for Holy Rosary School. 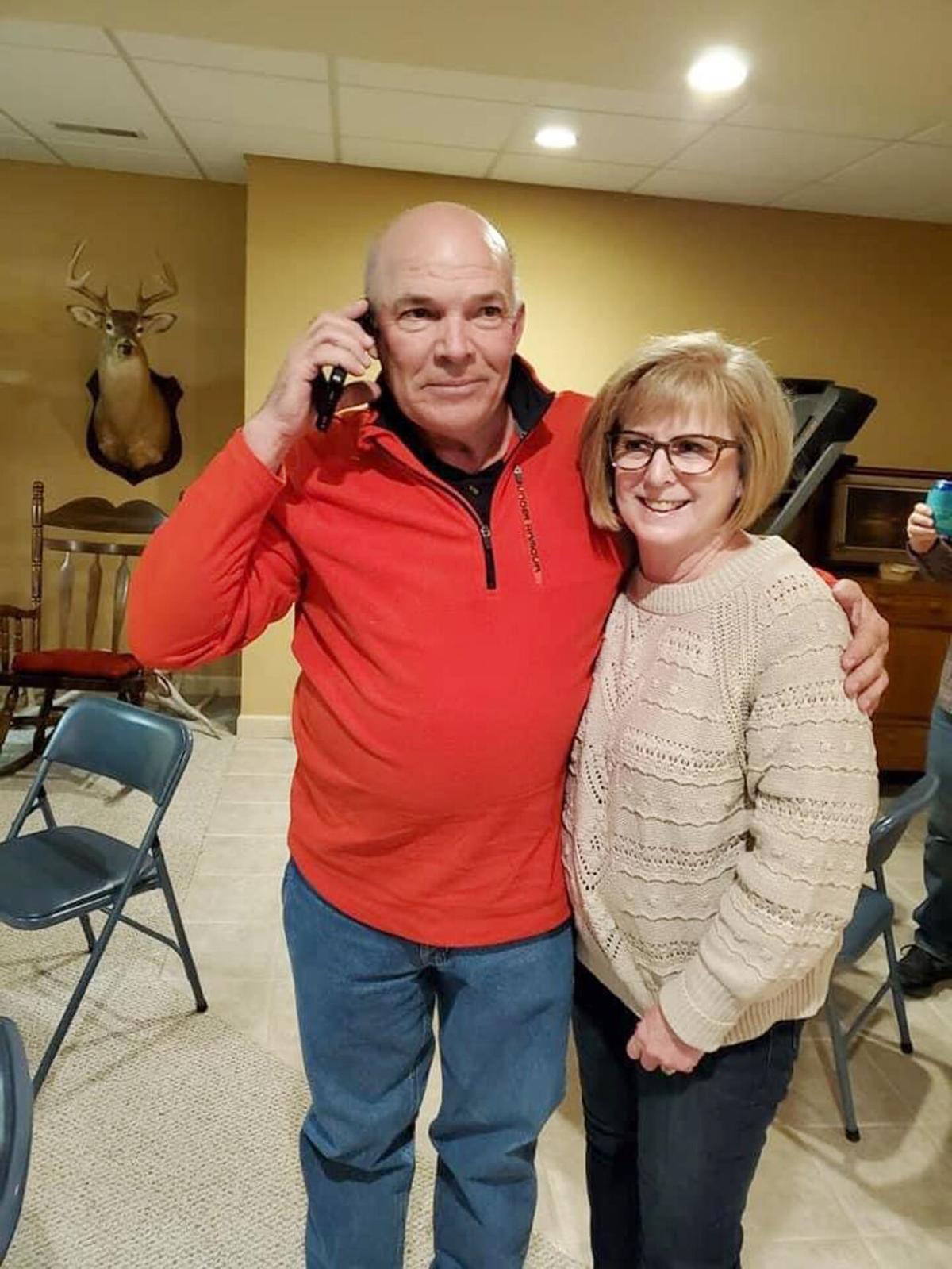 Jerry Elsberry stands with his arm around his wife Renee as they anxiously await the announcement of the all or nothing decision.  The Elsberry’s were one of two big winners at the Virtual Lucky Hearts evening, winning $5,000 while surrounded with friends at a small pandemic safe celebration.

Saturday, Feb. 13, marked the nineteenth annual Lucky Hearts Banquet. Although the pandemic kept everyone from joining together, the event still shared the love virtually. Couples gathered around their virtual devices and watched for their names, in hopes to keep their ticket alive to be a grand prize winner.

The Holy Rosary PTO fundraiser hosts the popular date night each year.  The event took place at the Knights of Columbus Hall, as it has in all the years past. Only this year, there were no guests in attendance. The event sold 402 tickets, an increase from previous years of 300 tickets. As viewers tuned in the live online drawing, they were entertained by MC for the evening, John Long.

Those watching commented throughout the event. One viewer, Jimmy Fulton, asked, “Can I buy back in,” after his ticket was drawn. Others sent congratulations to winners of prizes throughout the drawing and tagged winners to notify them of their wins.

Prior to the event starting, the traditional prime rib dinner was available for purchase. The meal was served to go from the KC Hall. Meals were sold separately, in addition to the purchase of a ticket.

The prime rib was prepared by the Ritter Brothers.

Ticketholders were given a chance to win money prizes throughout the night of ranging from $150, $200, $250, $300, $500 and $1000 with the last drawing being for the grand prize of $10,000. As the tickets were drawn, names were announced to receive prizes and eliminating people as tickets were drawn up to the last two, for the Grand Prize drawing finale.

Promptly at 7 p.m., the first ticket drawn belonging to Jo Ann Marquart, who won $500. The drawing continued as each was counted to the final draw. Those winning $150 were Joel and Emilee Volrath, Ed and Becky Thomas, and Cam and Tiffany Ritter. Those winning $200 were Brenda Buckman, Melody Hoover, David Wilson, Brandy Straube, Ralph and Sherry Lemongelli, Blake Paris and Keith and Jane Crowe. Those winning $250 were Mike and Penny Fulton, Connie Cramer, Jeff and Melanie Albus and Renee Shinn. The $300 winners were John and Rhonda Browning, Matt and Karen Kendrick, Phillip and Bridget Potterfield and Riss Hays. Connie Kendrick won $500. Those winning a $1,000 were Joe and Jaymee Quinn, Parker Kendrick, Dorothy Parn and Matt and soon to be Anna Quinn.

This year’s Grand Prize was decided to be split by the last two ticket holders. This year the tickets belonged to Brandon Underwood and Lilly Buckman, along with Jerry and Renee Elsberry. Splitting the grand prize gave each of them $5000 and forfeited the $1000 prize back to the fundraiser. A total of $19050 was given to the lucky winners.