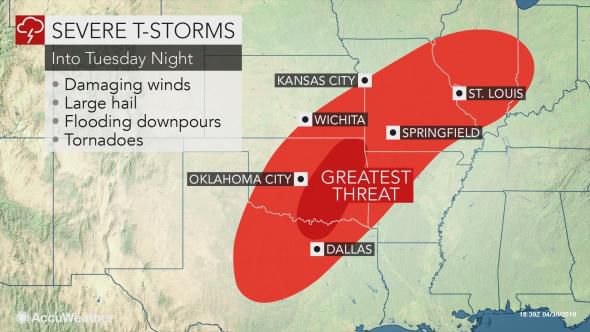 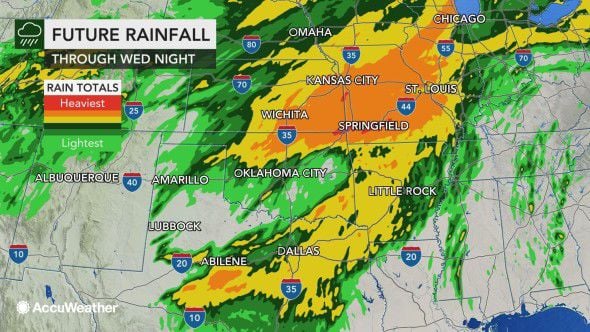 A persistent storm track will cause rounds of rain and severe thunderstorms with an elevated risk of flooding to extend from the southern Plains to the Midwest this week.

The setup will allow storm systems to travel from southwest to northeast in this swath. Some areas may be hit on a daily basis with potent thunderstorms and torrential downpours.

Episodes of severe thunderstorms will extend from Texas to as far as the Midwest this week.

Storms firing on Tuesday afternoon will persist into Tuesday night, the greatest risk of severe thunderstorms is forecast to extend along an approximate 1,000-mile-long swath from central Texas to central Illinois.

Damaging winds will be a fairly widespread concern with incidents of large hail and a few isolated tornadoes from late Tuesday on.

Intertwined in the areas of severe thunderstorms, as well as over an even more extensive swath is the likelihood of flooding.

Cities that can experience both severe thunderstorms and problems related to flooding rainfall include St. Louis, Springfield and Kansas City, Missouri; Dallas and Abilene, Texas; Oklahoma City and Tulsa, Oklahoma; Wichita and Topeka, Kansas; and Fort Smith and Fayetteville, Arkansas.

"Storms throughout this time period will be slow moving and capable of high rainfall rates over 2 inches per hour at times and can easily trigger flash flooding," according to AccuWeather Storm Warning Meteorologist Kayla St. Germain.

"Overall, the heaviest rainfall through the period is likely to extend from northern Texas to the eastern parts of Oklahoma and Kansas to the western parts of Arkansas and Missouri," St. Germain said.

Enough rain to trigger flooding is also anticipated farther to the northeast and toward the Great Lakes region.

From Tuesday through Wednesday alone, an AccuWeather Local StormMax™ of 8 inches is likely over portions of the central and southern Plains.

However, through Thursday, a few parts of this region may receive double-digit rainfall amounts.

Flooding is likely to range from that of urban and small streams to even along some of the rivers in the region.