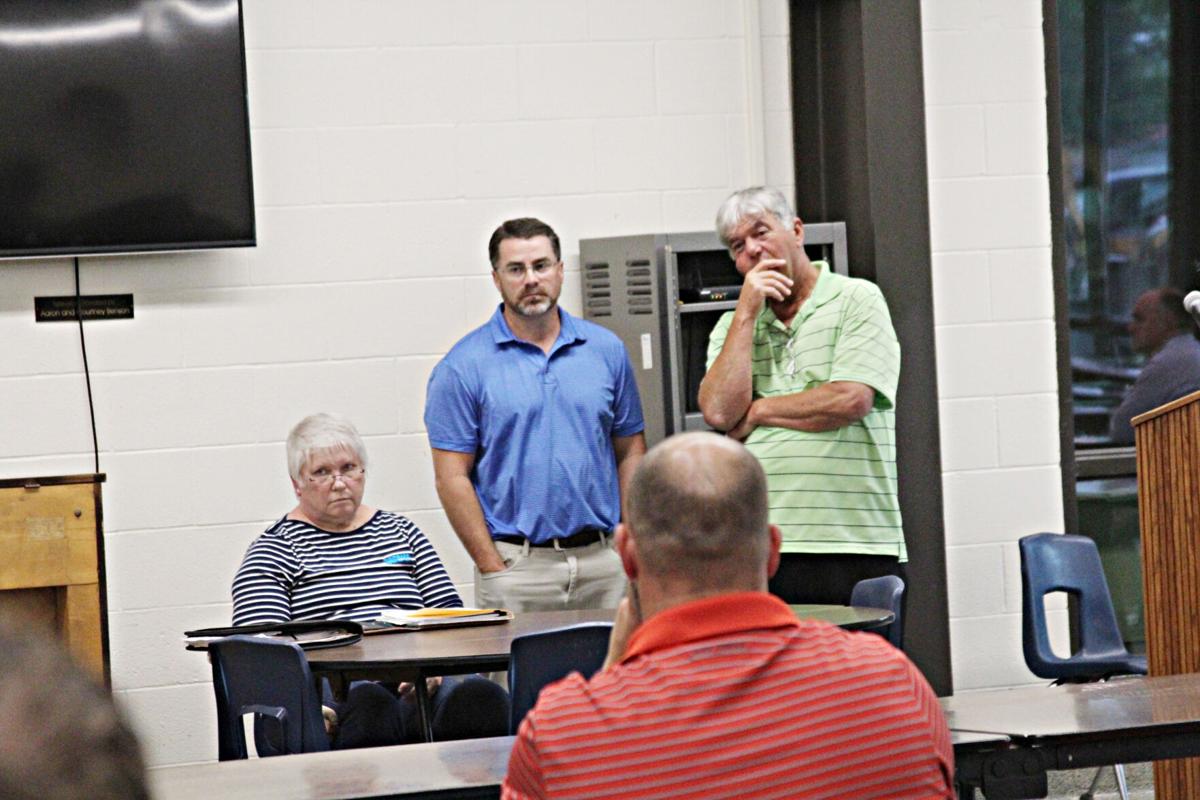 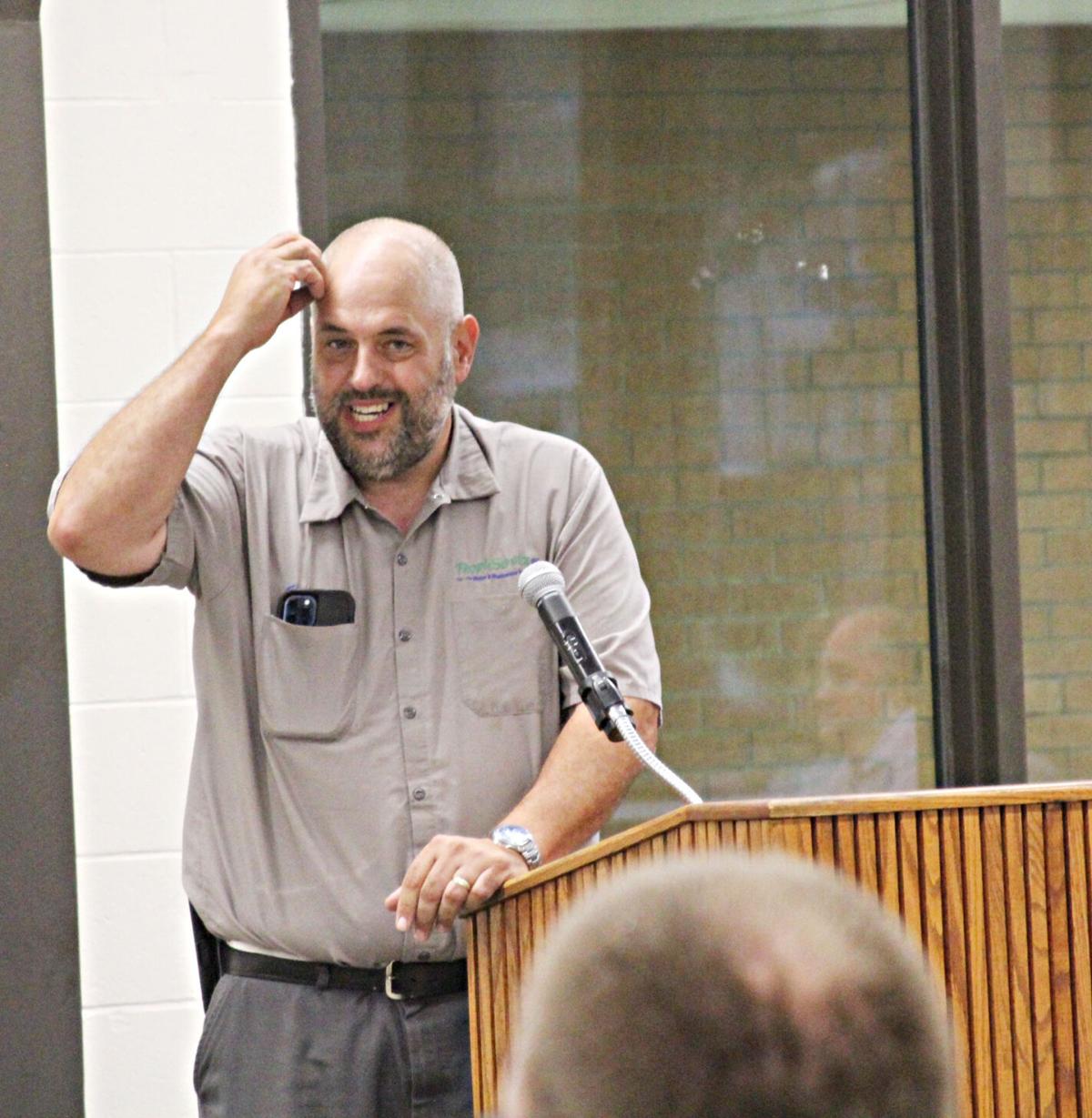 PeopleServices was hired in 2018 and this year, says Manager George Hausdorf, the water hasn’t had a bad taste. Clarence Cannon Water District has been in compliance for 29 years. 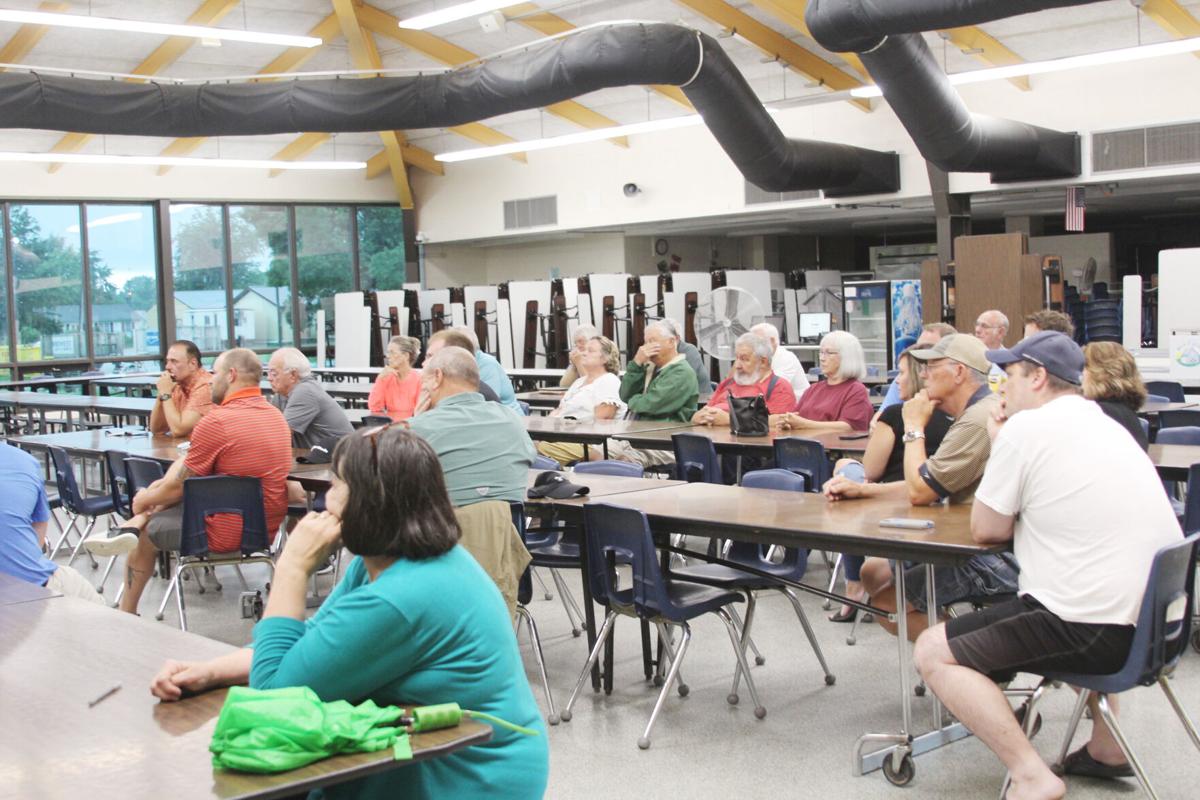 An Informational Water Quality Meeting was hosted by the City of Monroe City on July 15 at 6 p.m. in the high school cafeteria. The meeting saw only 18 guests in attendance, along with city officials and employees from four separate organizations including PeopleServices, Inc., Clarence Cannon Water Wholesale Commission (CCWWC), Black & Veatch and Missouri Rural Water Association (MRWA). The public meeting was held to provide the public with a chance to question each organization about the water options for Monroe City.

The City water treatment plant currently uses Route J Lake Reservoir as its water source, but has had problems in the past with the water source meeting State regulations. PeopleServices was hired in September 2018 and has produced water for the past year in compliance with all State and EPA Regulations. The City is considering all options to find what would be the best water provider solution for the City’s water supply.

During the meeting, each organization answered questions for those in the audience. Several concerns were raised about the longevity of Route J Lake Reservoir and the cost of repairs which could be needed in the future. Liz Grove, of MRWA, explained she disagreed that the Route J Lake problems were fixed, stating, “Route J Lake has a silting problem.

Repairs will be needed if the lake is going to be used as the long-term choice as Monroe City’s water source. Work needs to be done in the water shed, there is a nutrient loading problem,” reminding those in attendance this decision is a 20-30 year decision for the community. Grove added, “There will need to be a source water plant to preserve the water source.”

PeopleServices Manager George Hausdorf added, “There hasn’t been any problems this year with the water having the bad taste like years prior. Recently, the valve was switched to pull water from the lower valve instead of the higher valve. I don’t foresee any other problems and we currently have a treatable water source.”

Also in attendance was Darin Kendrick, who asked if there was a comparison chart available for the public to look at with numbers. He stated, “A pros and cons sheet would be helpful so we could better understand the numbers.” Mayor Jerry Potterfield answered, “No, there is not a chart at this time. It is hard to give a numbers chart because there is no way of knowing what will happen in the future as far as repairs needed or increased costs.”

Currently, the price given, was based on costs if the switch was to happen today. Grove stated, “The total price per 1,000 gallons right now with the current water source and contract with PeopleServices is $12.77. The total price to switch to CCWWC today if the $7 million project was complete would be $14.65 per 1,000 gallons.”

These costs have several variables to make the price increase or decrease.

For example, once the $7 million project with CCWWC is paid in full, the price of water today would be $2.13 per 1,000 gallons. This price can fluctuate if more projects were required or needed, but only a 6 percent increase of the project cost would be implemented to Monroe City because CCWWC project expenses are split between all its municipalities they provide water for.

For Monroe City to continue supplying its own water the cost could change due to repairs needed to the water plant or Route J Lake Reservoir, including contracts to manage the water treatment and price of chemicals to treat the water.

The limitations of having CCWWC supply the water was that there would be only one main line which ran under Mark Twain Lake. Hall stated, “We have never had customers without water for an extended amount of time. In 29 years, we have never been out of compliance with the State regulations.”

Hausdorf explained the water quality from Route J Lake stating, “Before PeopleServices took over, the water was not being oxidized enough before reaching the water plant. The boil orders were being caused because there was too much manganese in the water which was overloading the filters and causing higher numbers. The current treatments to the water source include reducing the amount of algae if water is pulled from the higher valve or reducing the amount of ammonia if pulled from the lower valve.”

The life expectancy of the current water treatment plant was questioned, as the water plant is currently 37 years old, being built in 1984. George answered, “It is my understanding the water treatment plant is above average shape including the walls and roof. Inside several there are several parts that could be replaced, but may not need to be. There is no way of knowing when that can happen. The equipment is not real expensive but we are not operating as modern as we could be. I believe in the foreseeable future we will still be in budget.”

The meeting also included the possibility of selling Route J Lake for approximately $1 million dollars and the City could also obtain a grant for $2 million to help offset the project cost of $7 million for the CCWWC project of the public choose this as the best option.