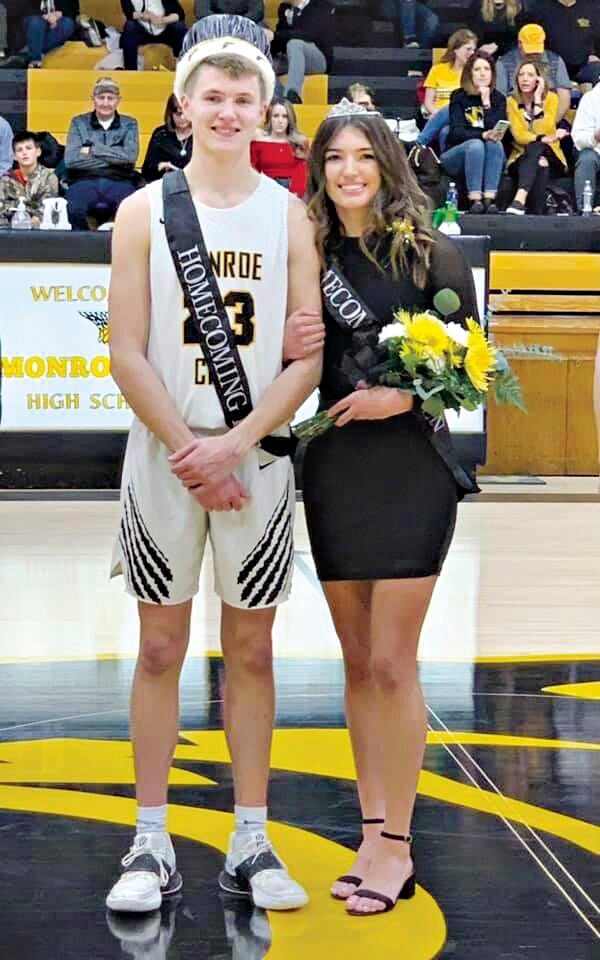 Riley Quinn, daughter of Gerry and Loree Quinn  and Logan Buhlig son of Jon and Shelley Buhlig and  Erica Buhlig were crowned the 2021 Basketball Homecoming Queen and King Friday, February 12. 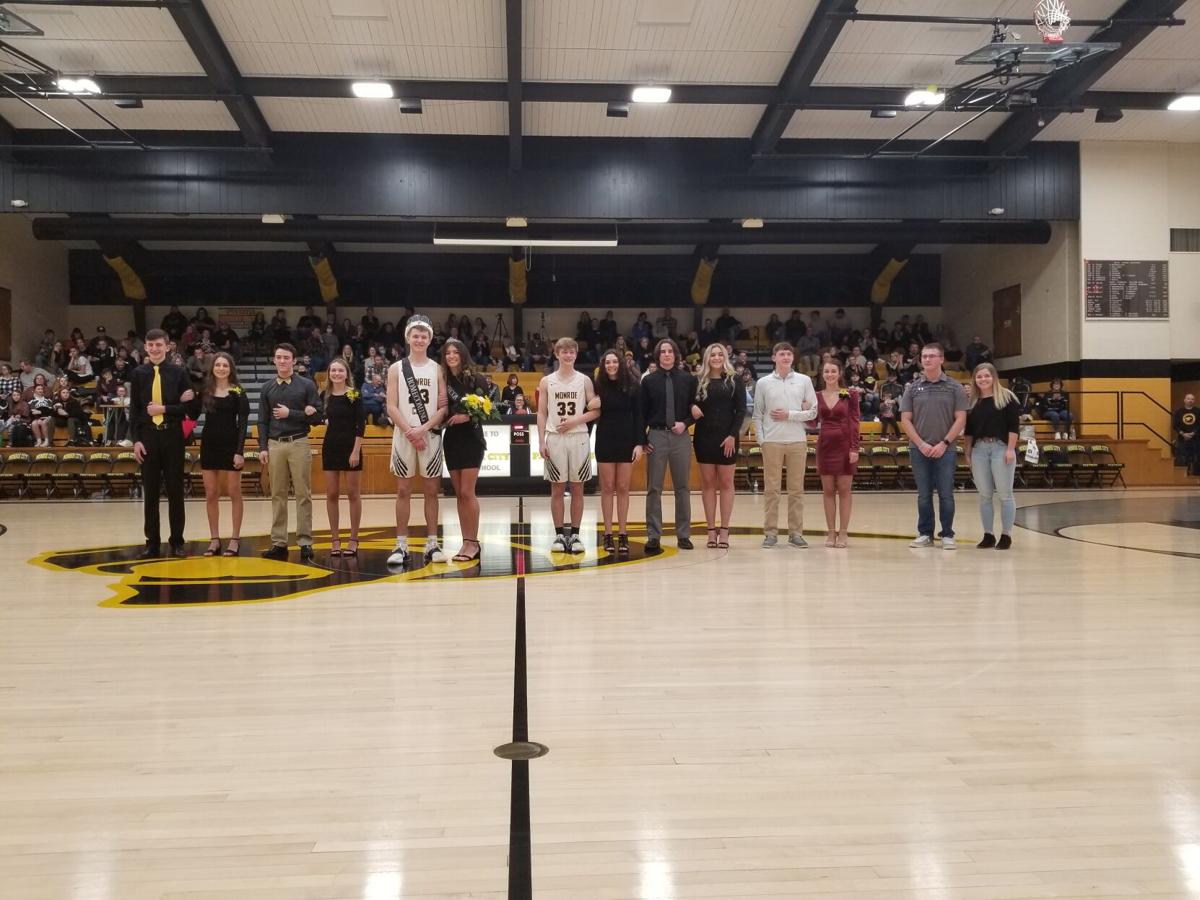 The Monroe City R-1 high school held their annual Homecoming Royalty crowning on February 12 despite the cold weather conditions. The 2021 Coronation took place between the Varsity Girls and Varsity Boys game against Centralia. Winning the crown was Logan Buhlig and Riley Quinn as this year’s royalty.

The annual basketball homecoming tradition is held by the student council and voted on by the student body for King and Queen.  This year the weeks festivities of hall decorating, daily dress themes and the pep assembly were cancelled due to school closure throughout the entire week for weather conditions. The Homecoming nominees were announced as they walked to the center of the court.

The freshman attendants were introduced first. Ryan is the son of David and Amber Hays. He plays football, basketball and is on the golf team. Ryan is a member of FFA, FCA, FBLA, and Book Club. He is a member of Holy Rosary Church. Ryan mows lawns and works at youth basketball games. He enjoys hanging out with friends and family. Perri is the daughter of Chris and Heidi Dimmitt. She plays softball and is a member of FFA and the FFA Knowledge Team. Perri attends Clover Road Christian Church and is a commercial cleaner. She enjoys hanging out with friends and family, playing softball, and making tiktoks.

Next, the sophomore nominees were announced. Jag is the son of Rick and Melissa Hays. He plays football and enjoys riding 4 wheelers and dirt bikes with his friends, fishing, and camping. Haley is the daughter of Sarah and Darren Hagan. She plays basketball and is on the MCHS track team. Haley is a member of book club and she babysits in her spare time. She enjoys playing travel basketball, and hanging out with her friends, family, and her dog, Harley.

Then the junior class nominees entered the court. Cade is the son of John and Angie Chapman. He plays basketball. Cade works at Indian Creek Marina. He enjoys hunting, fishing, basketball, playing fortnite, and working on his truck. Adriona is the daughter of Tyler White and Kim Snider. Adriona plays softball and she is a member of NHS. She works at BKs. Adriona enjoys hanging with friends and going on Sonic runs.

Lastly the seniors were announced. Logan is the son of Jon and Shelly Buhlig and Erica Buhlig. He plays football, basketball, and is on the golf team. He works at Indian Creek Marina. Logan enjoys playing golf, Hanging out with friends, and enjoying the outdoors. He plans to attend Mizzou and major in Business with a minor in Criminal Justice. Maddy is the daughter of Jeff and Emily Gares. She is a member of the MCHS dance team, FFA, National Honor Society, STUCO, Science Club, and Art Club. Maddy participates in the Chosen Youth Group and Kids Camp. She enjoys dancing, listening to music, and hanging out with friends Maddy plans to attend Benedictine College, she is undecided about her major. Logan is the son of Frank and Laura Lucas. He is a member of FFA, FBLA, NHS, STUCO, Choir, and Panther Players. Logan also runs Track and XC. He is a member of the Holy Rosary Youth Group Senior Leadership Team and Holy Rosary Church. He is a carryout at CR. He enjoys listening to and singing music, playing basketball, and listening to his parents. Logan plans to run track and XC in college while studying in the field of Communications. Riley is the daughter of Gerry and Loree Quinn. She plays softball and basketball. Riley is a member of NHS, Science Club, Art Club, STUCO, FCA, Hands for Hope and Book Club. She attends bible study, PSR, and youth groups. She gives swim lessons. Riley enjoys hanging out with friends and family and watching her goats play. She plans to attend Mizzou and major in nursing. Kelson is the son of Kevin and Stacie Painter. He plays football. Kelson is a member of NHS, Science Club, and the homecoming committee. He works at KP’s Repair and the City of Monroe. Kelson enjoys playing football, hanging out with friends, hunting and fishing. He plans to attend the University of Central Missouri and major in Mechanical Engineering. Hannah is the daughter of Tyler and Heather Wheeler. She is a member of NHS and the MCHS dance team. She runs Track and cross country, and participates in the musical. Hannah helps kids camp and she’s a lifeguard at the Mark Twain Landing. She enjoys hanging out with friends and family. Hannah plans to attend Mizzou.

The Panthers were able to take a Homecoming Victory, but the Lady Panthers encountered their first loss of the season.