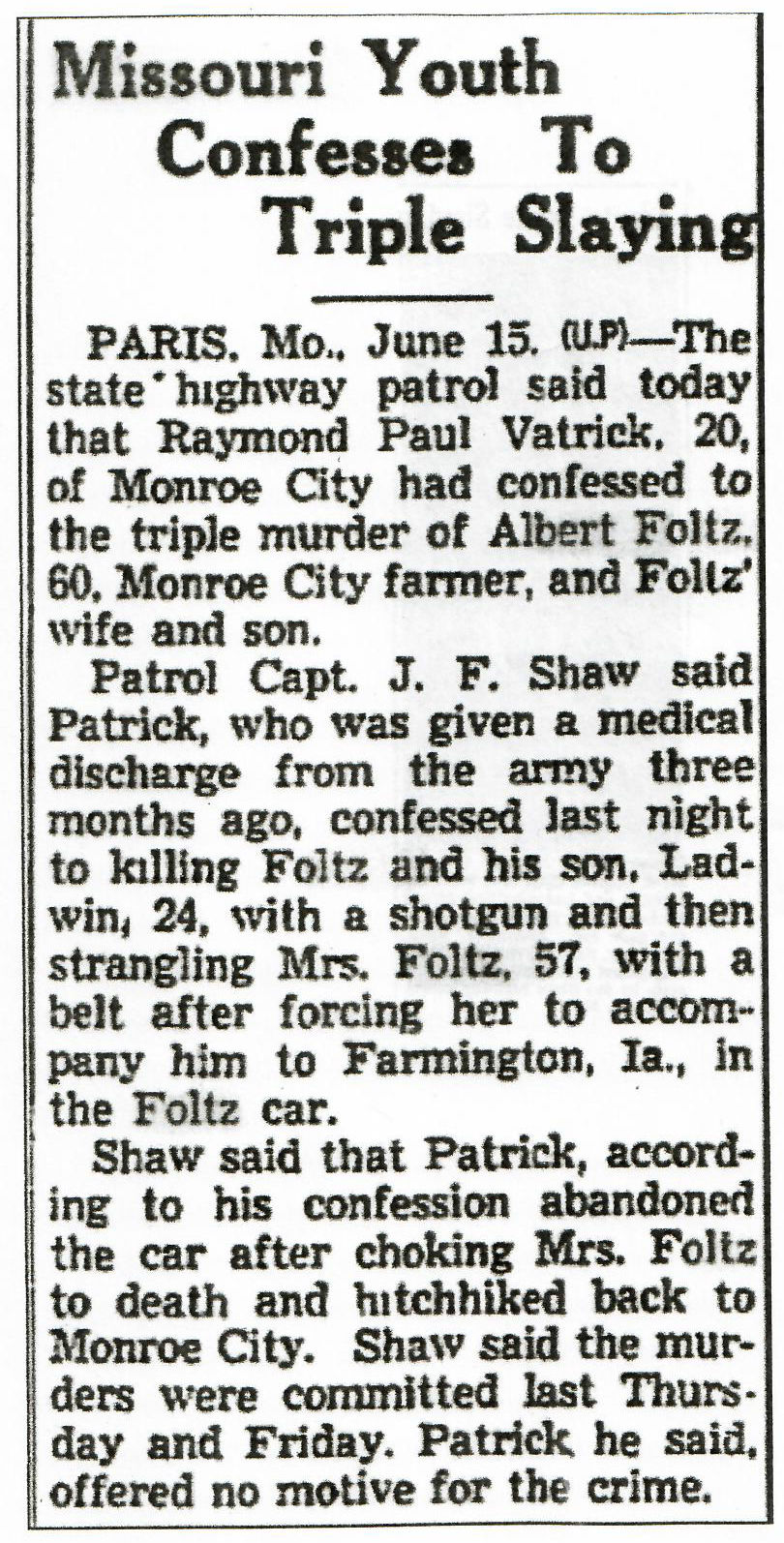 A quarrel of evil; upsetting an entire countryside

The recollection of memories shared by Historian Porter Moss of a triple murder occurring in rural Monroe County. The year was 1944, in early June.

As one goes happily to bed after a hard day’s work for the night, seldom is a person awakened by cattle and calves mooing in a desperate begging way as loud as they could, as if calling out for help in the night. Porter shared, “Sometime before getting up time, nearly three or four o’clock in the morning, I became wide awake and went downstairs. I spoke to Grandma about the cows calling out through the whole night.” Porter shared his Grandma, Grandma Alma Virginia (Sickles) Wheeler, had heard them and was also awake, noting she believed the cattle sounded desperate and seemed to be begging for help.

The neighboring farm was the Foltz Family. Porter shared of his Grandma’s response stating, “I remember my Grandma thinking something must be terribly wrong. They would never leave on a trip without telling her because she always looked after their place and livestock whenever they were gone.”

Farm work had to be done, as Porter remembers the day starting like any other with daily chores needing to be done. It did not matter if the night was sleepless. With his brother, Bill, and Grandma they began milking their three dairy cows by hand. Next, they would run a hand separator, separating the whole milk into cream and skim milk into two different containers. Ported stated, “One was a five-gallon cream can and the other was a five-gallon bucket. Breakfast followed and then Porter remembers heading out for the day to work.

Upon arrival home in the evening, there were six police cars in our farm driveway with his Grandma sitting in the back seat of a Missouri State Highway Patrol car. Grandma got out of the car and told Porter they would not be staying the night at the house and she would explain later.

Porter shared, “When I had left for work earlier that morning, my Grandma had walked over to the Foltz farm which adjoined our farm. She had knocked, no one appeared to be home, but the house was unlocked. As she went in she noticed dishes were left unwashed and the upstairs was all torn up. She left the house and checked the barn lot, letting the cattle out to run and gave them some feed. She left a note on the kitchen table explaining what she had done and for them to call her on their return.”

Finding the Foltz Farm in such array, sparked alert. The Foltz Family were responsible farmers and would never leave the farm and animals like this without telling someone. Grandma Wheeler made the decision to call the Sheriff’s Office and make a missing persons’ report.

All the neighbors were called and asked to be on alert looking for the three Foltz family members.

The same day the Monroe County Sheriff’s Deputies arrived at the empty farmhouse and upon investigating, found large barn nails had been used to nail an upstairs bedroom closet door shut and a pry bar on the floor to pry the nails out to reopen the door. The conclusion was an appearance of an attempt to lock someone in the closet and later opened to let them out. The bedroom was also torn up and in total disarray.

The police determined the scene left them to believe there could have been a serious crime committed. The officers broke into three search parties consisting of deputies and neighbors to conduct a complete search of the farmland and adjoining properties. Porter stated, “One of the neighbors had seen buzzards flying and circling the first creek draw west of the house.” As the search party approached this area they could see a human body draped over a pile of brush. Upon inspection, it was found to be Mr. Albert Foltz, who had been fatally shot.

Several law enforcement agencies were notified of the horrific crime. Before the sun would set, investigators would learn a young man from Monroe City was to spend the night with the Foltz’s son, Laddie. An alert, was issued for Mrs. Foltz, Laddie Foltz and their guest Mr. Patrick, along with the Foltz’s new Ford car which was also missing.

The crime occurred one mile northeast of North Fork. It was later determined to be a triple homicide of the entire Foltz Family including Mr. Albert Ross Foltz, age 60, his wife, Mrs. A.R. Foltz, age 57, and their son, Ladwin J. Foltz, age 20. The murderer, was determined to be their guest, Raymond Paul Patrick, age 20, of Monroe City.

A few days prior, Laddie left the farm around 5 p.m., picked up Raymond and his 16-gauge shotgun. The two headed to a night club in East Hannibal. After arriving, a loud and aggressive argument broke out over Laddie’s older sister, Hazel. Raymond was known to have a crush on Hazel. They were asked to leave the club. Hazel had confided in her brother previously she was not interested in Mr. Patrick, openly telling others he was weird, strange and acts crazy.

When Laddie and Raymond arrived at the Foltz’s residence, they parked the car on the west side of Deer Creek School House and intended to walk the quarter mile to the house to the family farm. The farm was on a dirt road, and the Foltz’s parked their car up the road when rain was expected. As the two headed towards the house, Raymond shot Laddie in the back of the head and put his body in the trunk. Raymond then headed to the house, locked Mrs. Foltz in a closet at some point and went to the pasture with Mr. Foltz and shot him as well.

He then returned to the house, loaded Mrs. Foltz into the family car. Mr. Patrick was noted to be seen in Mexico, Shelbina and then in Farmington, Iowa. In Iowa, he committed the third murder, strangling Mrs. Foltz with her dress belt and leaving her body in a concrete culvert.

Porter recalls his father working out of town during this time and rode the bus home once a month from Peoria, IL. The bus his father was riding, picked up Mr. Patrick in Quincy, who sat next to him on the ride to Monroe City, where he stopped off to walk home. Mr. Patrick shared he had been to Iowa to visit family and friends.

Porter shared, “As Dad arrived in Hunnewell, he learned of the murder and missing person search. Chief of Police, Tom Spalding informed him of the crime committed and search for the Foltzs’ and Raymond Patrick. Dad explained he had just rode the bus home with him and he had been to Iowa.” The Police then traveled to Monroe City and arrested Raymond Patrick.

Three months prior to the murders, Raymond Patrick had been medically discharged from the Army. For the triple homicide, he received two life sentences for the murders of Laddie and Mr. Foltz, Mrs. Foltz murder in Iowa never went to trial.

Raymond Patrick escaped two times while serving his time in the Missouri State Penitentiary, he was captured and lived the rest of his life behind bars, dying on May 5, 1981 at the age of 56.