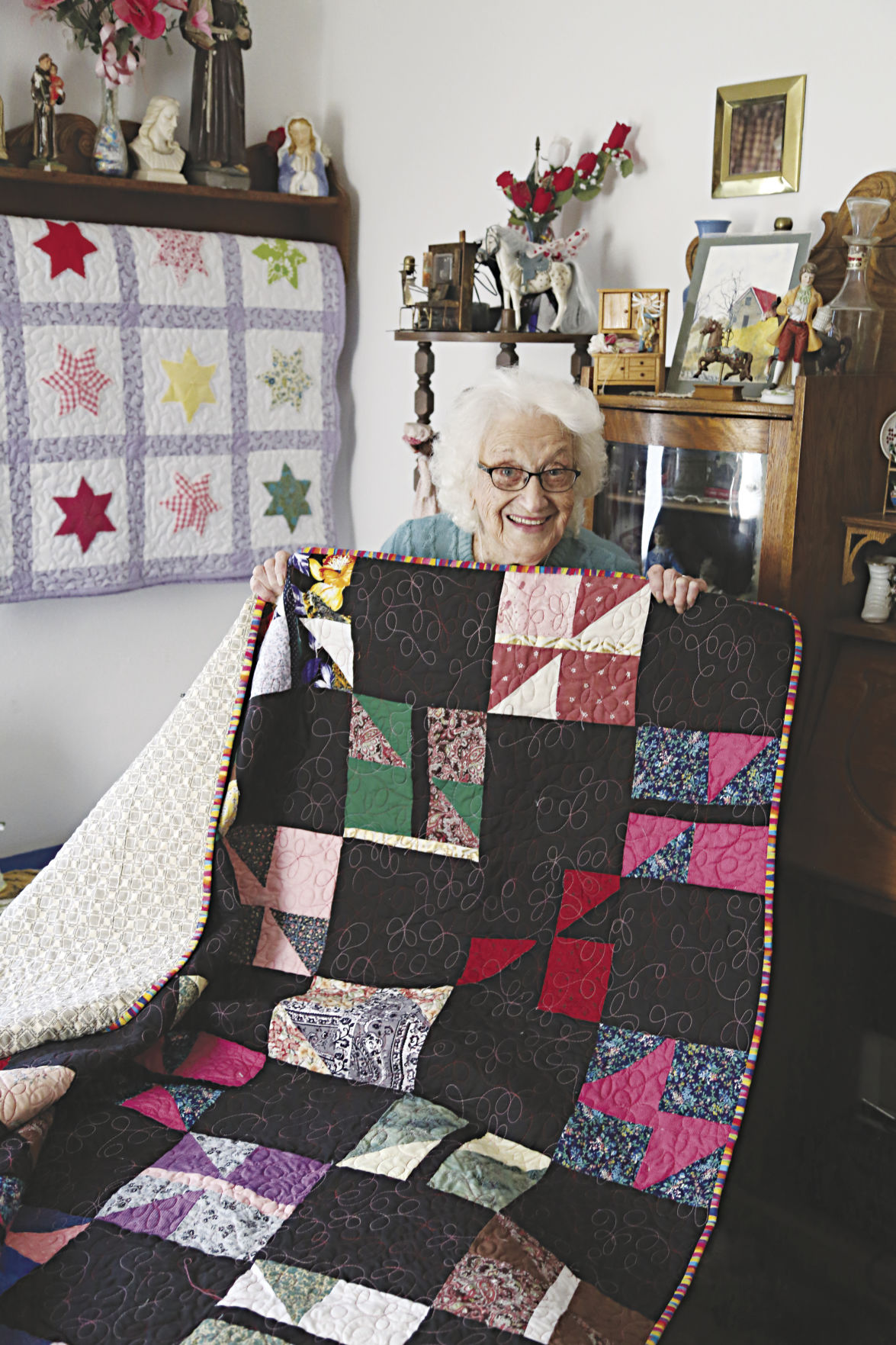 Veronica O'Connor with her quilt she made at the age of 98. 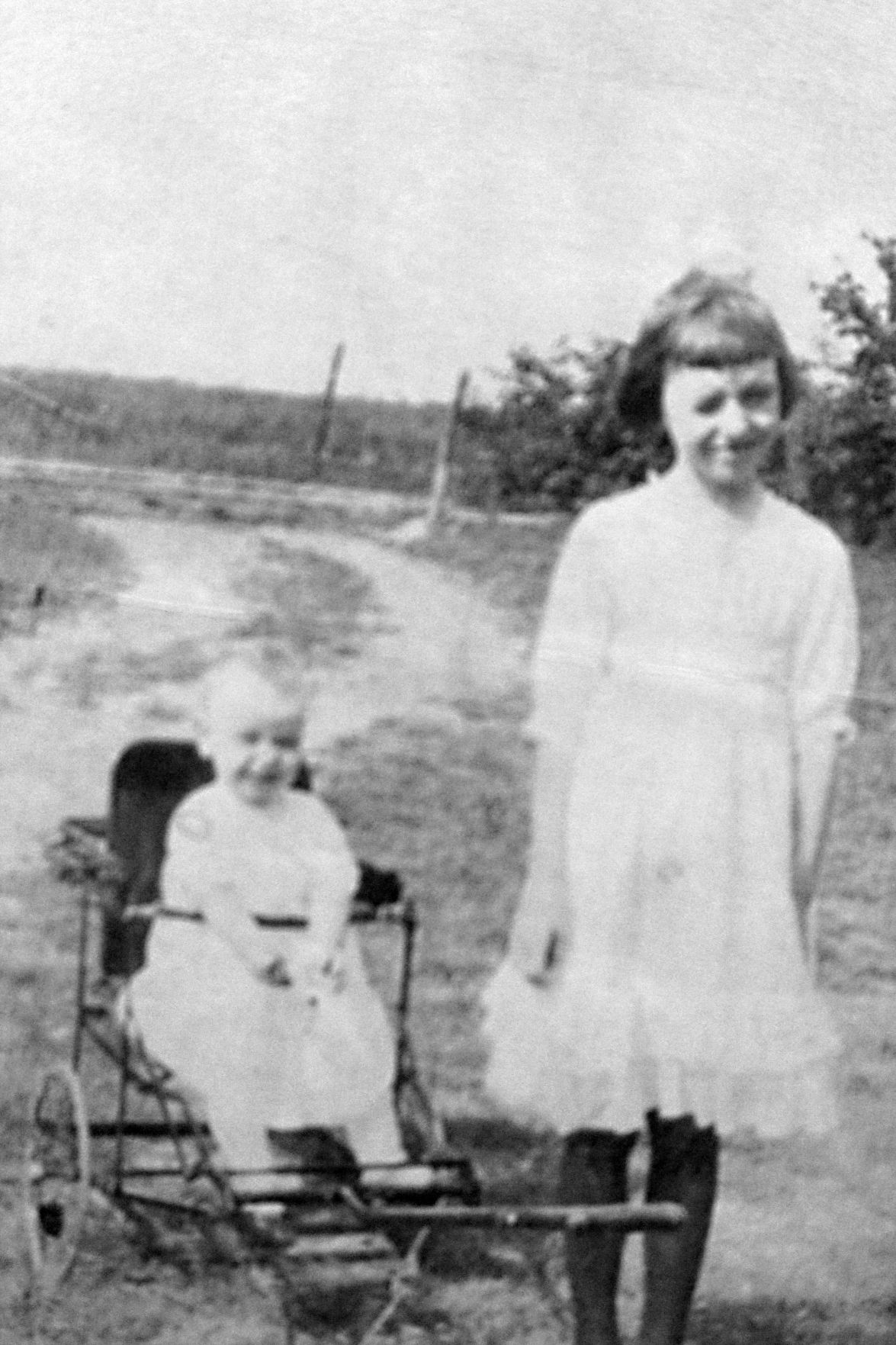 Veronica with her older sister Dorothy. 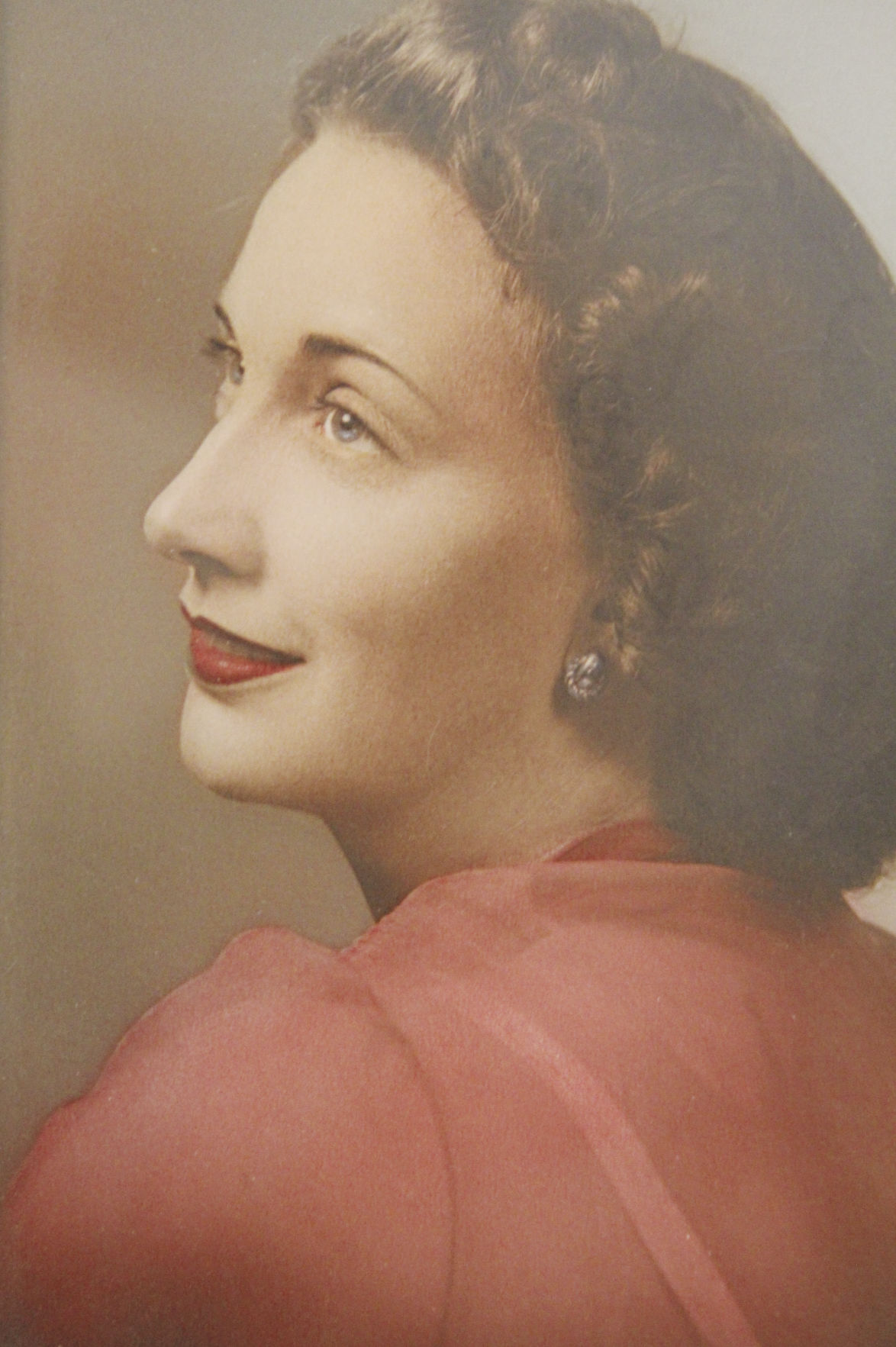 Veronica O'Connor at the age of 30 years old. 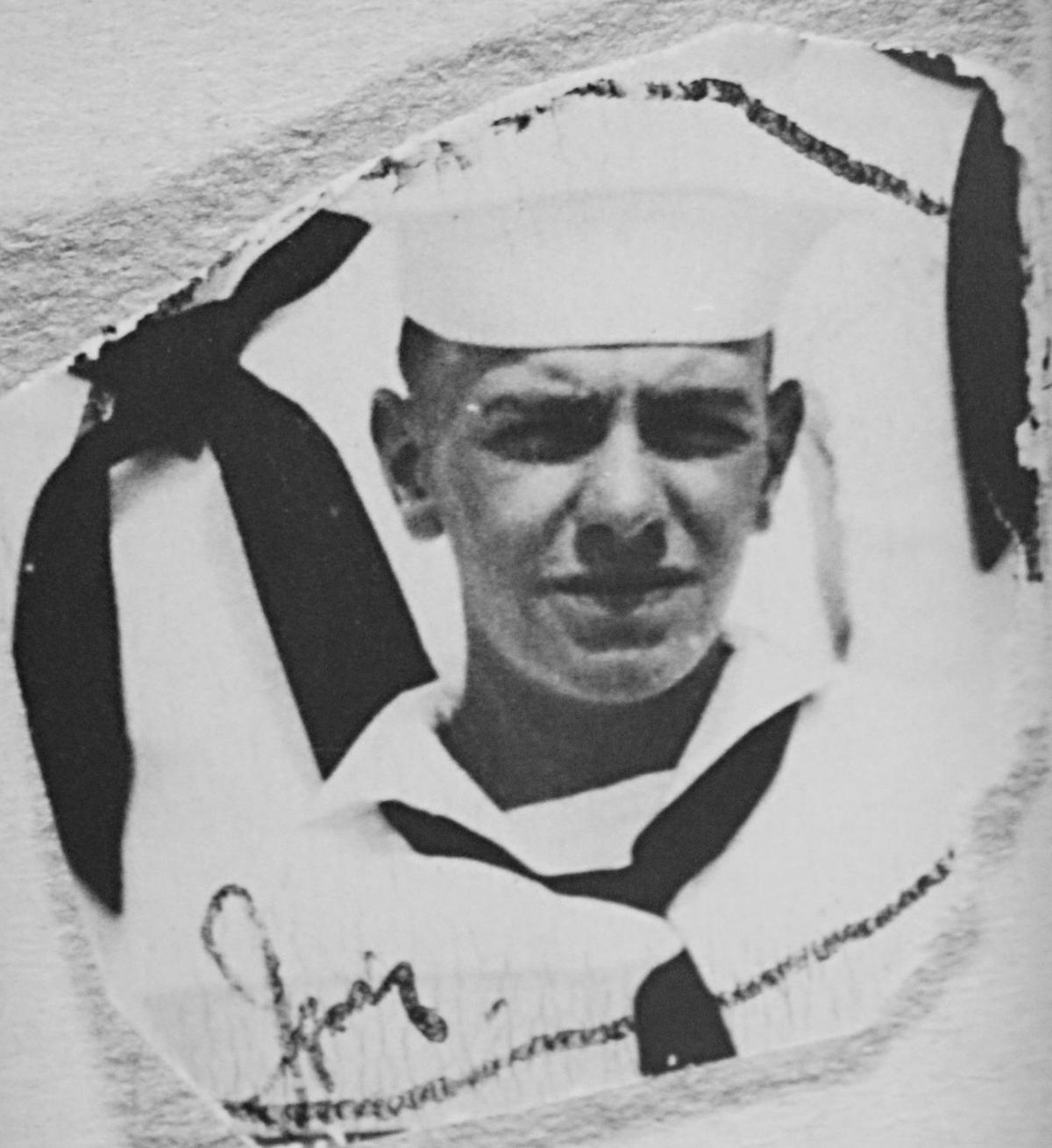 Veronica's brother, Theodore Frances Arnoldly, who lost his life serving his country in World War II at the age of 19. 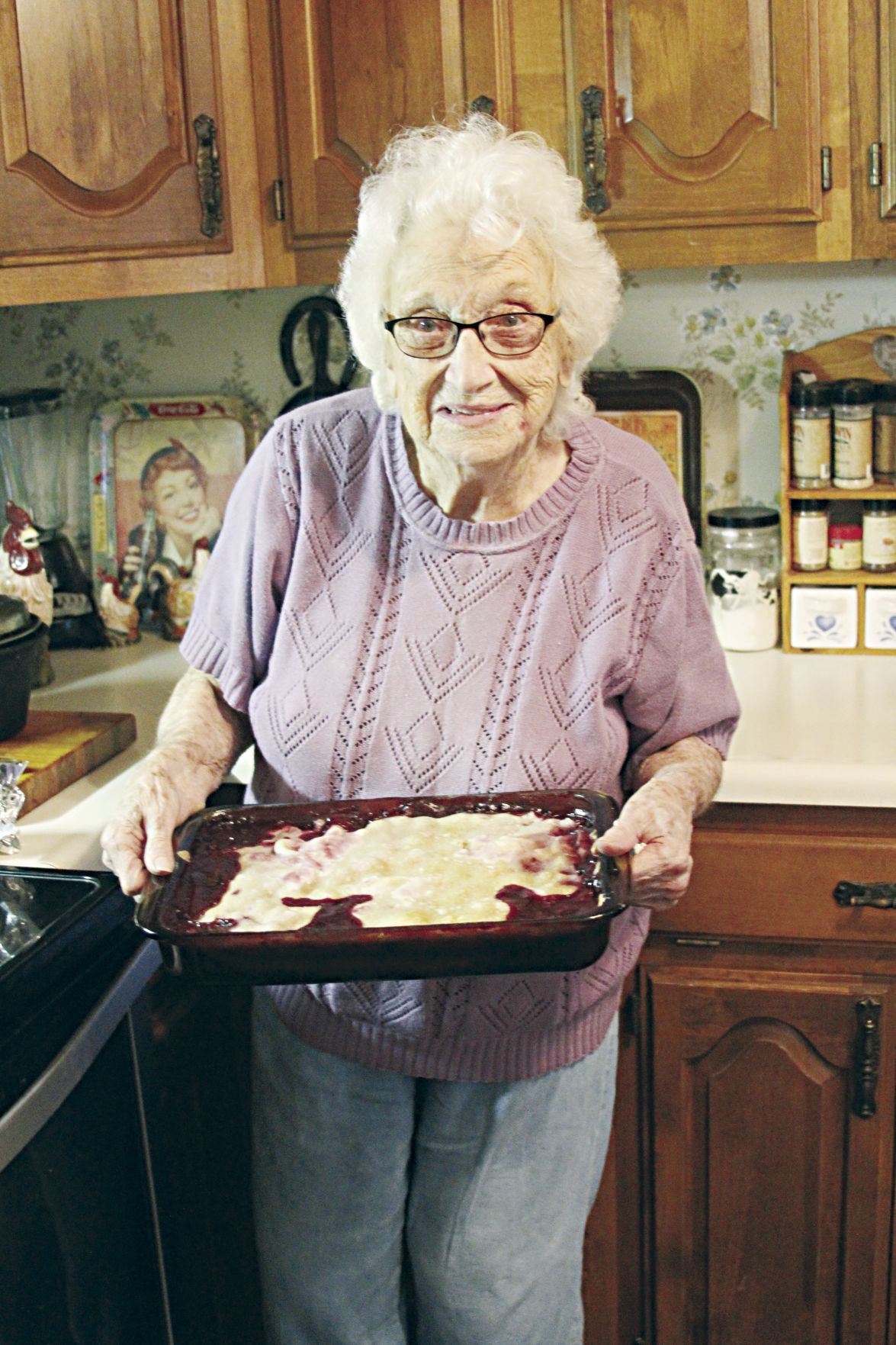 Veronica and her blackberry cobbler she prepared for her 100th birthday celebration on July 20. 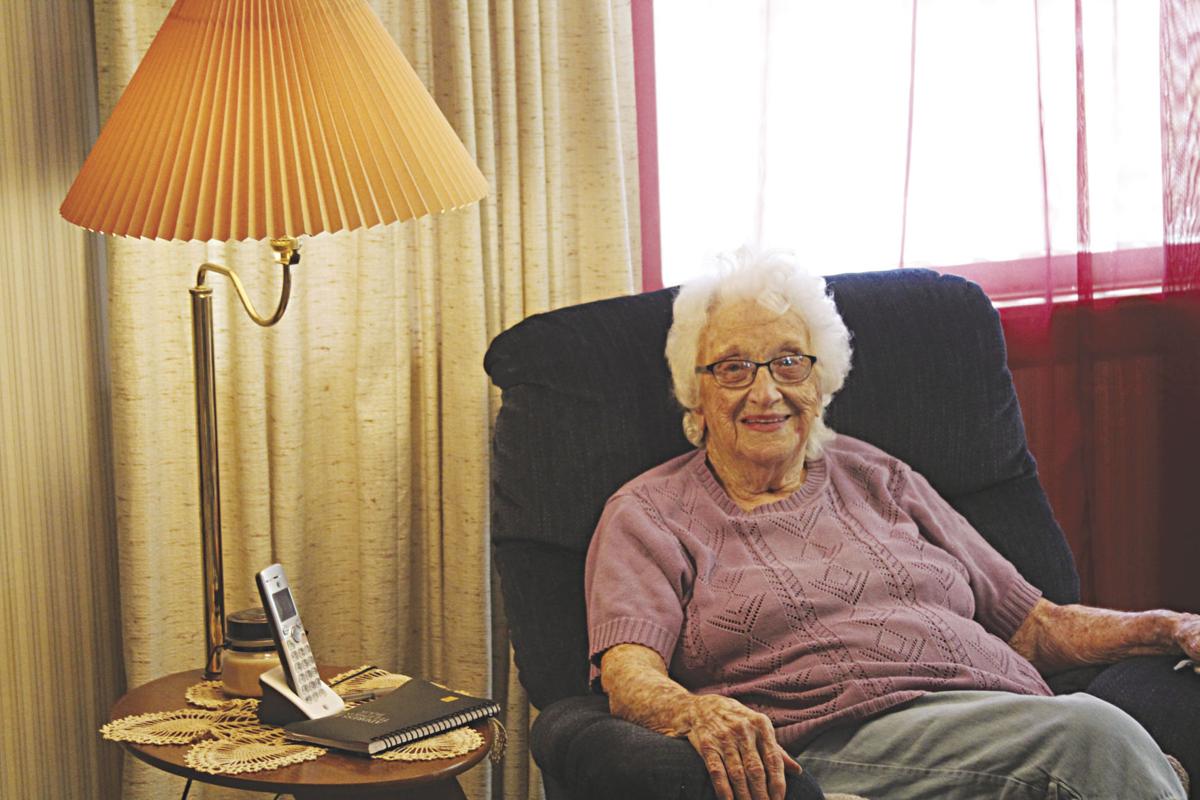 Veronica O'Connor, sitting in her chair, where she prays and reads each morning before starting her day.

Words of wisdom spoken by a 100 year old Farm girl

“Being unhappy makes you sick. I enjoy every day I live. I have never been able to stay mad at any one. There is no use in having hard feelings,” expressed Ms. Veronica O’Connor, as she shared her life here in the Monroe City area, over the past 100 years.

As Veronica prepares to celebrate her 100th birthday with family and friends on July 20, she states, “I don’t think about being 100.” She has been busy preparing homemade pies for her children and grandchildren, baking everybody’s favorites, including cherry pie, raisin pie and blackberry cobbler.

Veronica expects there will be approximately 45 family members gathered together to celebrate from seven different states, adding, “My birthday is bringing Monroe City business,” as she smiled her sweet contagious smile.

Born in the year 1919, Veronica has lived through five wars and the depression. She shared, “I have had my joys, happiness and sorrows too.”

Born and raised on what is now known as the Kuhlman farm, to Theodore “Tate” and Ida Sullivan Arnoldly, with her sister Dorothy and brother Theodore Frances, Veronica grew up a farm girl on 223 acres. Veronica shared her work experience as a young girl stating, “I went to work at the Henderson Poultry House at the age of 16. I worked at 12 cents an hour to help my father save our farm during the depression. My sister also worked there to help.” She explained, during this time pretty much everyone lost their farm in the depression, but Mr. Henderson was a nice man who owned the mortgage to our farm and agreed to let Dad pay the interest on the land during that time, so we could keep our farm. She stated, “During these hard times, was the only time my mother worked.”

At the age of 17, Veronica moved to Hannibal to live at Ms. Trails boarding house on Church St., continuing her career at the International Shoe Company. She stated, “I paid $5 per week for room and board. Every morning Ms. Trail would fix a big breakfast, then I would walk to work.” Veronica would ride the bus home on the weekends to spend with her family and shared looking forward to those times.

At the age of 19, Veronica attended a dance in Stoutsville and met the love of her life, Fred O’Connor. They married on December 2, 1939 and settled in Perry on a farm. Veronica smiled as she remembered, stating, “He was a farm boy and I was a farm girl, he used to call me Billy.” She shared being the age 19 and helping her husband butcher their first beef, saying, “I canned all the meat and it was the best tasting beef I ever ate.”

Veronica remembers fondly the day she got her first cook stove, explaining with joy as her eyes lit up, stating, “Fred got up early one morning around 4 a.m. He shucked a big load of corn by hand and then went to town to sell it. When he returned, he brought back my first cook stove for our house. After that, I could make the best homemade biscuits.”

Although her life had many happy moments, Veronica stated, “My biggest sorrow happened in 1944, when I lost my brother in World War II.” With tears in her eyes, showing her heartache, she shared, “You never get over a tragedy like that. He enlisted in the Navy and served only 6 months before Japan bombed his ship.” Veronica explained her brother had lived through the bombing and was injured, adding, “He died on a ship headed back home and was buried at sea.”

Veronica also lost a daughter in 1943, who was named Patricia Jean. She stated, “I had a hard time carrying my children. Losing Patty Jean when I was eight months pregnant from blood hemorrhage.” Veronica explained she had Polio which affected her left hip when she was two years old. “I almost died twice, but the good Lord kept me,” stating, “The doctor told Fred it is by God’s mercy your wife is still alive,” as she spoke of losing her daughter. Veronica went on to explain her diagnosis as a child, stating, “The doctors told my mother I would not recover and sent me home to die,” adding, “I always thought the Polio may have affected my ability to carry children.” She shared, “I was bed ridden for eight months with Teddy. I knew if I got up I would lose him. So, I just stayed in bed and prayed a lot. I had five miscarriages between having my children.” Veronica and her husband raised two sons, Freddy Jo and Teddy, along with eleven grandchildren and several great grandchildren.

After her brother passed away, Veronica and her husband moved to rural Monroe City, purchasing her parents farm. She shared, “My brother had planned to join the service, save all his money and move home to purchase the farm from my parents. Since they (her parents) were getting older, we decided to sell our farm in Perry and help them after losing my brother.” While living on the farm, Veronica raised 400-500 chickens at one time, dressing them and selling them to local restaurants. “I drove the farm truck, doing the milk route and sold eggs. I still drive myself to church every Sunday and have never had a wreck or traffic ticket,” Veronica explained. Smiling she reminisced her first driving experience, explaining, “The first car I drove was my Dad’s 1927 Model T. If it rained, you had to stop and button the side curtains.”

In 1961, after she raised her sons, Veronica went to work at the Swinkey School as a cook. She worked there seven years, until her son, Freddy Jo, was injured in Vietnam. She stated, “I felt it was my place to stay home and take care of my son.” In 1998, Veronica shared, “I lost my son to esophagus cancer. In Vietnam, they sprayed that agent orange to get rid of the vegetation, I guess they didn’t think what it may do to our soldiers.”

Veronica and her husband, later sold her parents farm, and bought a farm where she currently lives, stating, “This has been a great farm, the other farm had rolling hills and this one is flat and has been wonderful for farming.” Together, the O’Connor’s shared 43 years of marriage, before Fred lost his battle to brain cancer. Veronica shared, “We moved to town to be closer to the doctors, but after Fred passed I wanted to live where I felt most happy, and that is on the farm.” “So, I sold my house, hired my own contractors, designing my house myself. I didn’t even tell my kids until I had it all planned out,” as Veronica laughed showing her independent character. “I was 70 years old when I moved back out here to the farm. I love my house because it looks out over the farm.”

Today, Teddy continues to farm the land he grew up on raising cattle and bailing hay. Veronica explained, “I have always been able to make a living throughout my life. I cash rent the farmland out now and that gives me a decent income.” Veronica grows spices in her back yard and sells them to local neighbors, she explained and makes lap robes for disabled veterans in the winter. Every year since her son was injured in Vietnam, Veronica sent Christmas care packages to soldiers at Fort Riley, Kansas and boxes of hats, gloves, scarves and necessitates to the St. Joseph Indian School in Cambridge, South Dakota. She stated, “Last year was the first year I did not send a box because the postage was just too high. So, I made a donation instead,” adding, “I never did anything real notable, but I always kept busy and gave what I could.”

People may wonder, what does a typical day look like for someone who is a 100 years old? For Veronica, she states, “I decide every evening what I am going to do the next day.” She gets up every morning and eats breakfast, adding, “I eat at the table, so many people don’t do that anymore.” Next, she says her morning prayers for about an hour or so, rests and drinks her coffee. Then she stated, “I decide what to do, If I feel good, I do it.” Every day she fixes dinner for her son Teddy, while he works on the farm and enjoys eating together. She shared, “It’s important to enjoy life, never stay mad at anyone, it may hurt but life is too short.”

As Veronica celebrates her 100th birthday she shares being excited to spend time with family making memories and getting to share her baking recipes with granddaughters and her talent of quilting with another, stating, “I’m still teaching.”

Veronica admits being thankful for her life, adding, “God has been good to me, I am still at home, I have plenty to eat and I don’t have to worry about anything.”

To serve is a selfless act; true joy is received through giving