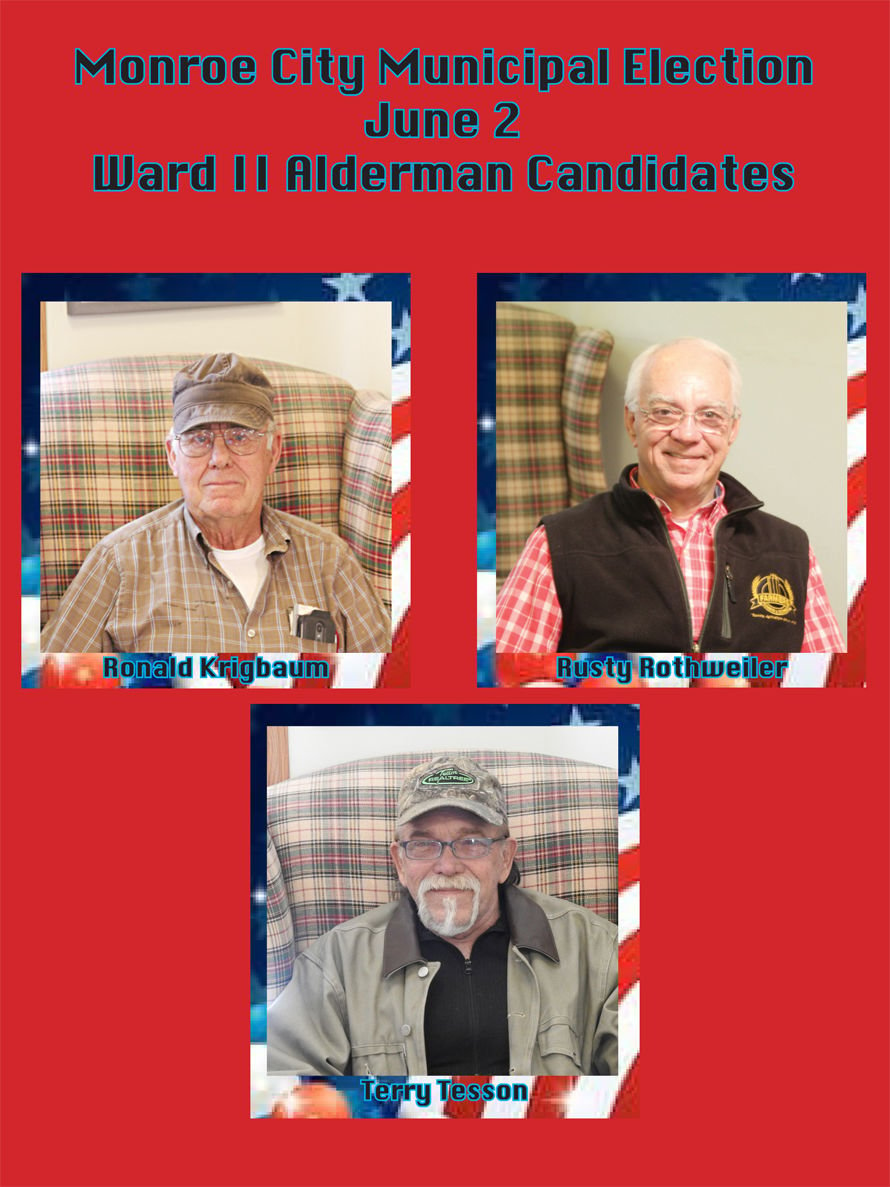 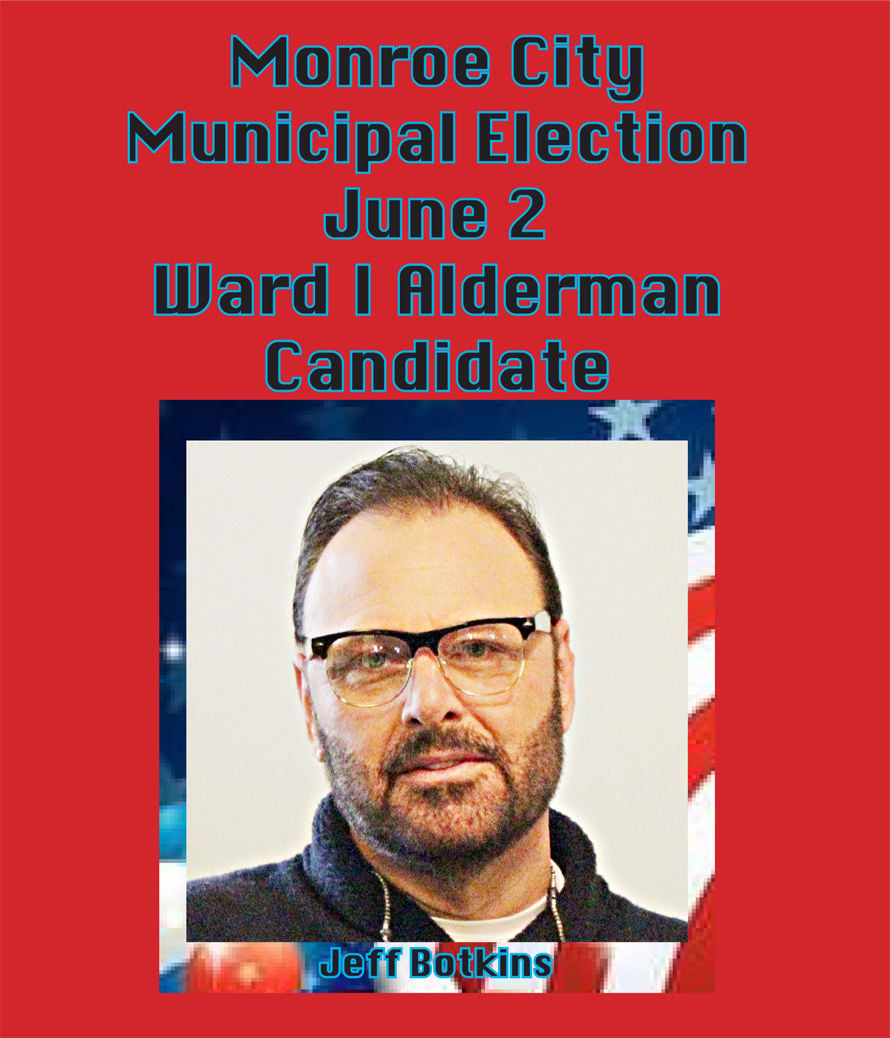 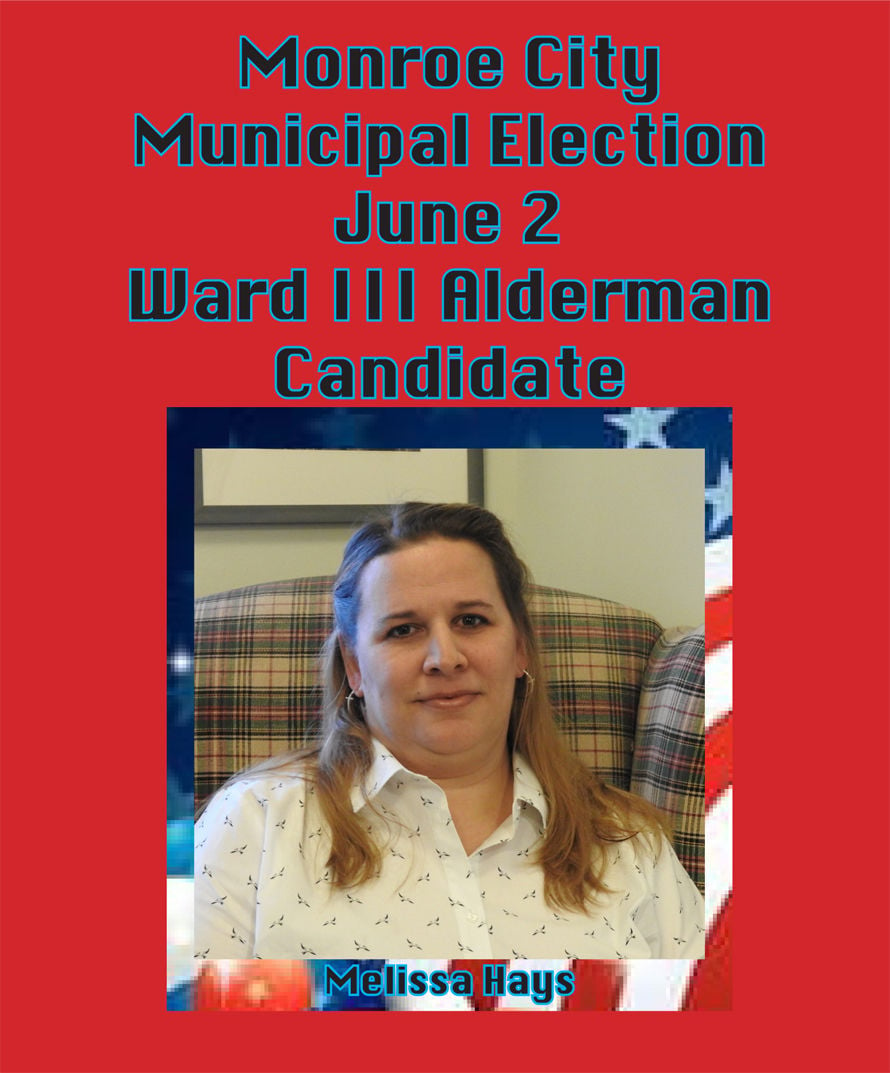 Ronald Krigbaum, also known as Festus, is running for Alderman in Ward II. Krigbaum has been a Monroe City resident for 12 years.

Krigbaum explained his interest in serving his community as Alderman was to help get the water situation straightened out and work for the people.

Krigbaum is a retried lifetime railroad laborer and stated, “For the bestest, vote for Festus.”

Rusty Rothweiler is running for the elected position of Alderman Ward II. Rothweiler has been a resident of Monroe City for more than 40 years. He retired from Sydenstrickers, of Palmyra, where he managed a multi-million-dollar business and performed customer service. He currently works part-time for Farmers Elevator as a Beef Feed Consultant. Rothweiler currently serves as the appointed Alderman for Ward II. Rothweiler and his wife, Georgia, have four children and ten grandchildren.

Rothweiler, if elected believes he can bring a different perspective, stating, “I have always been known as a good listener. I can sort through problems that will support everyone. I was brought in to this position in February, so I can hit the ground running. It takes us all working together to move forward.” Rothweiler shared his feelings of the current board, explaining, “They are already doing a great job, I just want to see it get better if we can.”

Terry Tesson is running for Alderman for Ward II. Tesson has been a resident in the community for 30 years. He has more than 20 years of experience in the utility and substation service working as a technician which includes drinking water and sanitation treatment systems. He has been affiliated with the water and sewer control treatment and advancement, along with having experience with the Department of Natural Resources.

Tesson stated, “I would like to provide better management of the City’s tax dollars. My goal is to make decisions to prevent citizens of this town with burdens,” he went on to explain how he is a candidate which plans for the future, stating, “Twenty years ago I tried to implement a plan to prevent the City from the increases occurring to the City’s water and sewer systems. I supported a plan to save five percent into an interest growing escrow account for the City to have for the problems we are facing today. We need leaders who will focus on real issues and stand for what is right.”

Jeff Botkins is running of Alderman in Ward I. He has been a lifelong resident of Monroe City. He previously served the community as Alderman in the past from 1984-1986 and again from 1987-1989.

Botkins is the father of three children: Jaymee, Jordan and Justin. He previously worked for Diemakers for 23 years. Botkins serves as President and owner of Safe Development Bend Tech. Botkins also spends his time as a consultant of Ambit Energy.

Botkins was a past member of the Monroe City Jaycee’s and is currently active in fundraising for the Monroe City Booster Club, Ducks Unlimited, Whitetails Unlimited and has donated time to the Monroe City Lion’s Club. He is an active member at The Crossing Church and Chairman of the City Street Department.

If he is elected Alderman, Botkins will work for concerns and stand for the resident’s voices. Making progressive growth and development for the community an important factor, using his experience.

Melissa Hays is running for re-election to continue her position asAlderman in Ward III. She has worked with several people in the community, attends school events supporting the successes of the children together with other community members, she has cheered along with the fans at the Monroe City Panther football games and has had the pleasure of knowing acquaintances during everyday life in the community.

If re-elected, she would continue to be a positive, driving force for community growth and improvement. Hays plans to continue her support to programs and ideas that will bridge the gaps between local law enforcement, schools, and the community.

Hays has been married to her husband, Rick, for 23 yrs. and they have four children: Samantha who is a graduate and continues to study at the University of Missouri in Kansas City, Max is a 2020 senior graduate at MCHS, Jag is in the tenth grade, and Harper will be entering the fourth grade.

Hays manages the Monroe City Senior Housing properties and her husband is employed at Knapheide in Quincy, Il. Hays states, “I am proud of our town and would be honored to serve my community.”